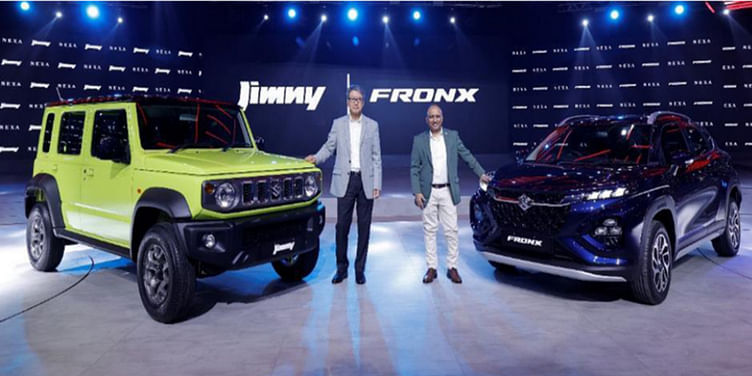 Both Fronx and Jimny will be sold via Maruti Suzuki’s Nexa showrooms, with prices expected to be announced in the next couple of months.

Maruti Suzuki has brought the 2023 edition of the Auto Expo to life by displaying some of the most exotic and highly-anticipated models—some pre-production prototypes, and some production-spec models—slated to hit the market in the coming months.

Among them is Fronx, a sub-compact crossover, based on Maruti Suzuki Baleno. Internally codenamed YTB, test mules of this coupe-style SUV are spotted frequently on Indian roads. Fronx is expected to go on sale in April 2023 via Maruti’s Nexa chain of dealerships, and bookings for the car have opened.

Despite sharing its DNA with Baleno, the appearance of Fronx is uncannily familiar to the Grand Vitara. The most apparent resemblance is its front fascia featuring an upright nose, a trapezoidal grille with gloss black inserts, a split headlamp setup comprising an LED DRL on top, and a three-pod main headlight cluster on the front bumper.

At the sides, Fronx gets chunky wheel arches with thick black claddings that differentiate it from Baleno, while the sloping roofline and a protruding tail lend it a crossover-ish profile. The design of the 17-inch dual-tone alloy wheels is also different from Baleno, which runs on smaller 16-inch units.

At the rear, Maruti has gone for the connected taillights theme at the rear on Fronx further establishing its resemblance to Grand Vitara. Other visual highlights include a roof-mounted spoiler, silver-coloured roof rails, and body-coloured ORVMs (black in dual-colour options).

In terms of dimensions, Fronx measures 3,995 mm long, 1,550 mm high, and 1,765 mm wide—similar to the Baleno. Maruti will offer the crossover in six mono-tones and three dual-tone colour options.

The cabin layout of Fronz is identical to the modern Maruti models, including the dashboard, seating, and space. However, to add a sense of sportiness of a crossover, Maruti has added a special forged metal-like matte treatment to the dashboard highlighted by high-gloss silver inserts. Further, the cabin is wrapped in an all-black colour scheme.

The equipment is carried over from its hatchback sibling and includes features like a floating nine-inch touchscreen infotainment screen, a flat-bottom three-spoke steering wheel with controls, rectangular AC vents, a heads-up display, a 360-degree camera, Suzuki Connect telematics, and more.

Under the hood, Fronx gets two powertrain options. The first is a 1.2-litre dual-jet naturally aspirated petrol engine that kicks out 89 bhp and 113 Nm of peak torque. This motor will be available with either a five-speed manual gearbox or a five-speed AMT unit.

The other option is a 1.0-litre Boosterjet turbocharged petrol mill that previously powered the Baleno RS. The engine cranks out 99 bhp and 147.6 Nm of peak torque while mated to either a five-speed manual or a five-speed torque converter automatic gearbox.

The much-awaited five-door Jimny finally made its global debut at the 2023 Auto Expo. As expected, it retains the boxy silhouette of its three-door sibling sold overseas. The five-door version of the SUV will be manufactured in India exclusively and will go on sale from May 2023 before reaching any other international market.

Bookings for the SUV have opened at a token amount of Rs 11,000, and like Fronx, Jimny will be retailed through Maruti’s Nexa chain of dealerships.

Powering the five-door Jimny is a 1.5-litre K-series naturally aspirated petrol engine churning out 105 bhp and 134 Nm of peak torque. Transmission duties will be carried out either by a five-speed manual or a four-speed torque converter automatic gearbox. It gets a 4x4 drivetrain with a low-range transfer case and a mechanical locking differential that proves it to be a true off-roader.