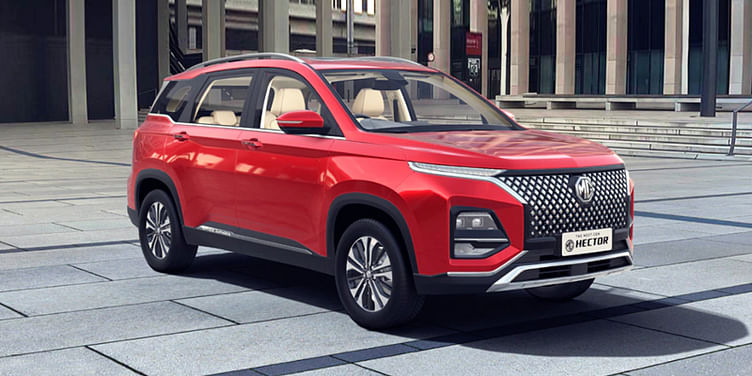 The biggest takeaway from the updated Hector and Hector Plus is the addition of Advanced Driver Assistance System with Level 2 autonomous technology.

﻿MG Motor﻿ has launched the updated range of Hector SUVs, including the five-seater Hector and the six/seven-seater Hector Plus in India, with prices starting at Rs 14.73 lakh (ex-showroom). Both SUVs flaunt redesigned exterior styling along with a host of new features.

In their latest iterations, Hector and Hector Plus look visually identical to each other unlike the pre-facelift models that were slightly differentiated in their exterior design. The new Hector range of SUVs receive a heavily reworked front face featuring a huge grille, comprising new diamond-like inserts, and are surrounded by an angular chrome element that seamlessly merges with sleek high-mounted LED DRLs.

The main split-headlamp cluster is housed within the front bumper, lending the SUV a bold look. A chrome-studded bash plate on the front bumper accentuates the car’s premium appeal. The side profile remains unchanged, featuring the same 18-inch dual-tone alloy wheels as their predecessors.

At the rear, both SUVs get refreshed tail lamp assemblies connected by a redesigned LED strip and underlined by a chrome garnish. Other visual highlights include the ‘Hector’ lettering embossed on the tailgate, twin faux exhaust tips with chrome surrounds, and a chrome-embellished skid plate on the rear bumper.

The interiors of Hector and Hector Plus witness a major overhaul with a redesigned dashboard featuring more horizontal lines and redesigned D-shaped AC vents. Hector gets a faux aluminium treatment on the centre console whereas its three-row sibling receives a faux wood finish on the same.

Speaking of the centre console, its layout has been reorganised with a new cup holder, an electric parking button, and lots of new buttons. Moreover, the five-seater Hector wears an all-black upholstery with satin silver accents, whereas the six- and seven-seater Hector Plus wear a different dual tone argyle brown and black upholstery.

As far as features go, both SUVs are heavily loaded with creature comforts, including a massive 14.0-inch touchscreen infotainment display along with a 7.0-inch digital instrument cluster. The systems are embedded with iSmart infotainment software. Another valuable addition is the automatic turn indicator that lights up even when the indicator isn’t turned on while changing lanes.

Other prominent features offered in the package include wireless Android Auto and Apple CarPlay connectivity, a wireless phone charger, ventilated front seats, an air purifier, a panoramic sunroof, and a 360-degree camera. The new Hector range benefits from 75 connected car features that can be accessed via more than 100 English commands and over 50 Hinglish commands.

Both SUVs retain the same set of engine options–a 1.5-litre turbocharged petrol engine and a 2.0-litre diesel engine. The former churns out 141 bhp and 250 Nm of peak torque and can be had with either a six-speed manual or an eight-step CVT automatic transmission. The diesel mill, on the other hand, generates 168 bhp and 350 Nm of peak torque and is mated to a six-speed manual gearbox as standard.