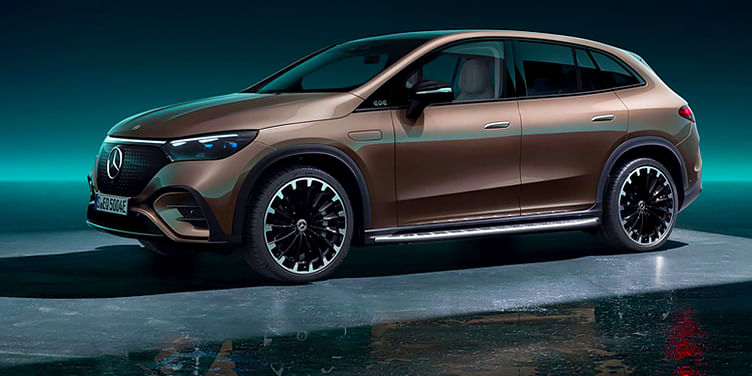 Upon launch, Mercedes Benz EQE SUV will lock horns with other luxury electric SUVs like Audi e-Tron and BMW iX.

In line with its commitment to creating a dedicated portfolio of electric vehicles (EVs) that mirrors its ICE lineup and to become a global leader in the battery-powered space, German auto major Mercedes Benz has officially unveiled its eighth all-electric model in the form of the EQE SUV.

As the name suggests, it is an all-electric derivative of the GLE SUV and is based on the brand’s EVA (electric vehicle architecture) platform that currently underpins models such as the EQS sedan, the EQE sedan and the EQS SUV.

The EQE SUV will be offered in three trim levels, in addition to two top-of-the-line AMG trims.

The EQE SUV visually resembles its sedan sibling as well as its larger cousin EQS with common highlights like a sealed-off nose featuring Mercedes’s pointed three-star logo and a gloss black panel housing the ADAS sensors. An AMG-specific Panamerica-style grille, restyled bumpers and an Affalterbach logo on the hood have been reserved for the top-spec performance trims.

The faux grille is flanked by chunky LED headlamps with integrated LED DRLs. The lower end of the front bumper houses a large trapezoidal air vent comprising C-shaped body-coloured elements. At its rear, the SUV flaunts highlights such as wraparound LED taillights connected by an LED strip in the middle and a roof-mounted spoiler. The rear bumper features a faux diffuser with exhaust-like air vents.

Like the rest of the EQ lineup, the primary focus of the EQE’s design is optimum aerodynamics and hence it boasts a swooping roofline with a clean and minimalistic side profile. The stance is sporty and sleeker which helps the crossover achieve a drag coefficient of 0.21. EQE rolls on uniquely designed alloy wheels with sizes up to 22-inch.

Interiors of the EQE SUV sport a familiar layout with an identical dashboard layout featuring Mercedes' Hyperscreen integrating a massive 17.8-inch centre display, a 12.8-inch driver’s instrumentation screen and a 12.3-inch touchscreen for the front passenger. The MBUX operating system offers a plethora of connectivity features along with over-the-air software updates via an embedded SIM card.

Like its sedan counterpart, the EQE SUV will be available in rear-wheel drive and all-wheel drive powertrains. All variants are equipped with a common 90.6 kWh lithium-ion battery that supports up to 170 kW of DC fast charging although motor specs vary across the range.

The base EQE 350+ variant is powered by a  single-motor, rear-wheel drive set-up generating 288 bhp and 565 Nm of peak torque. This trim has a claimed WLTP-certified range of up to 590 km on a single charge. The mid-spec EQE 350 4Matic comes with a dual-motor, all-wheel drive configuration producing 288 bhp and 765 Nm torque. It returns a claimed range of 558 km.

The top-spec (non-AMG) trim– EQE 500 4Matic– returns a peak output of 402 bhp and 858 Nm of torque along with a single-charge range of up to 547 km. The AMG lineup of EQE comprises two variants– EQE 43 4Matic and EQE 53 4Matic+. Both variants come with a dual-motor and all-wheel drive configuration as standard. The former churns out 470 bhp and 858 Nm of torque accompanied by a claimed WLTP range of 488 km.

The top-end AMG EQE 53 4Matic+ delivers a peak output of 620 bhp and 950 Nm of torque, making it the most powerful AMG SUV till date. This output can be amplified by opting for the Dynamic Plus package that bumps up the power to 680 bhp and 1,000 Nm. The crossover can accelerate from zero to 100 kmph in a meagre 3.5 seconds and attain a top speed of 240 kmph.

Apart from more powerful motors, AMG variants of EQE also benefit from a retuned suspension setup, electro-mechanical roll stabilisation and high-performance brakes with the option of ceramic callipers. They also come with a synthetic AMG sound experience for an otherwise silent powertrain.