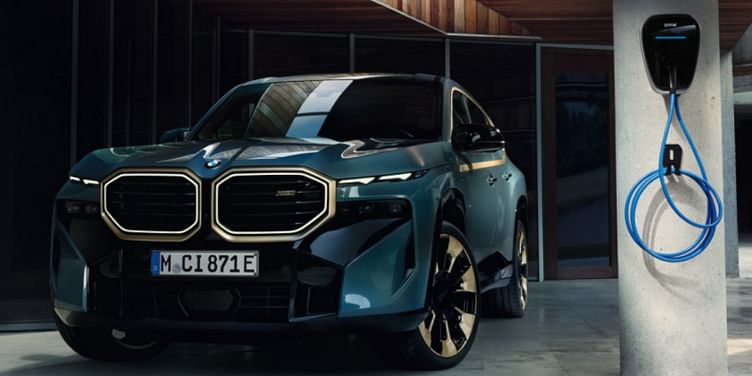 BMW XM is likely to make its debut in international markets like the US and China by mid-2023 and in India by the end of 2023.

BMW has pulled off the covers from the high-performance XM—the latest SUV from the brand’s M division.

This is the first standalone model from the BMW M range since 1981 when the original M1 was discontinued. The new XM also holds the distinction of being the first SUV from the M division to feature an electrified powertrain.

The SUV was first showcased as a pre-production concept last year and retains most of its design elements in the final model, barring a few controversial elements of the concept. These include flush door handles and boomerang-style taillamps that have been replaced by conventional units.

The dual-tone paint job in the concept has made way for a more traditional mono-tone colour scheme. Up front, the sharp and angular kidney grille is flanked by signature BMW-style split LED projector headlamps and LED DRLs. The grille also features LED illumination around its contours, spicing up the aesthetics.

The muscular front bumper houses a large air dam and intakes, which highlight the SUV’s massive proportions. Also highlighting its enormous road presence are huge 23-inch machine-cut alloy wheels offered as standard, with the option of 22-inch units as well. The side profile is adorned with understated creases and massive wheel arches with black plastic claddings that amplify its SUV characteristics.

With the XM being a flagship model, BMW has, instead of chrome trims, used a healthy dose of gold finishes on its grille surround, alloy wheels, window sills, and rear bumper diffuser. The rear end flaunts a sharper-looking tailgate that features aggressive wraparound LED taillights. Being an M division offspring, it gets a sportier quad exhaust setup.

Step inside the cabin and the XM will greet you with a minimalist layout and dual-tone interiors with Vintage Coffee Merino leather on the dashboard and door trims combined with Soft Nappa leather on the seats. The five-seater cabin of XM is based on the 'BMW Lounge' design. The uncluttered dashboard, the illuminated headliner, and the design pattern for the roofline make for a nice contrast to the SUV’s exterior.

Given that it’s a BMW, the XM packs all the bells and whistles, including features such as a digital instrument cluster, a large touchscreen infotainment system embedded with BMW's latest iDrive 8 software, a head-up display, a four-zone climate control, and plenty of connectivity tech and driver assistance systems.

BMW XM benefits from a premium sound system too, in the form of a 1,500W Bowers & Wilkins Diamond surround sound system while a Harman Kardon audio system comes as standard. Rear axle steering should help this giant SUV manoeuvre through tight city traffic.

Powering BMW XM is a plug-in hybrid powertrain featuring a 4.4-litre twin-turbo V8 petrol engine mated to an electric motor. This IC engine dishes out a peak output of 489 bhp and 650 Nm of torque while the electric motor pumps out 194 bhp and 280 Nm of torque. The combined peak output that drives this big SUV is 653 bhp and 800 Nm.

The electric motor is nestled within an eight-speed M Steptronic automatic transmission that sends power to all four wheels. The rear-biased all-wheel-drive system gets two modes – 4WD Sport and 4WD Sand. The torque split can be biased to the rear axle when 4WD Sport is engaged.

The electric motor draws energy from a 25.7 kWh lithium-ion battery pack. The cumulative output from the IC engine and electric motor offers stupendous performance with an electronically limited top speed of 250 kmph. Despite weighing a mammoth 2.75 tonnes, the burly SUV can sprint from zero to 100 kmph in just 4.3 seconds.

Further, the top speed can be extended to 270 kmph if one opts for the M Driver's Package. It gets three drive modes: Sport, Sport Plus, and Electric– the latter offering an all-electric driving experience with an estimated WLTP range of 82-88 km and a top speed of 140 kmph.

Meanwhile, BMW is also developing a more potent variant of XM. Christened the XM Label Red, this special edition model will dish out 748 bhp and a peak torque of 1,000 Nm. BMW XM locks its horns against other luxury performance SUVs like Mercedes-AMG GLE63 and Audi RS Q8.