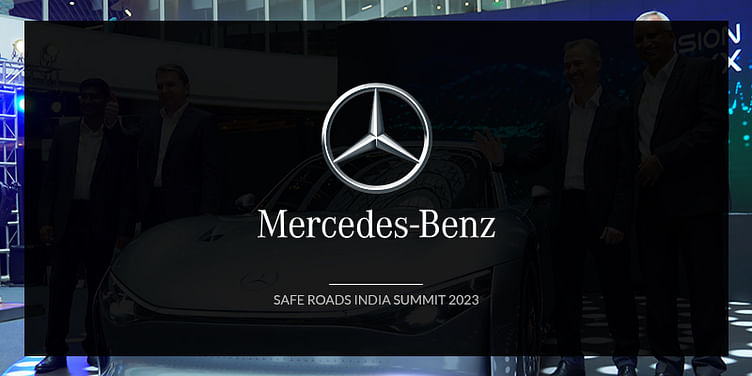 The all-electric powertrain in Mercedes Benz EQXX is claimed to be 95% efficient, with an average battery consumption of less than 10kWh per 100km.

At the Safe Roads Summit 2022, Mercedes Benz made two major announcements. The first was the launch of Vision Zero 2050 which aims to achieve accident-free driving by 2050. The second was the unveiling of the Vision EQXX electric concept car in the country. The concept prototype was globally unveiled earlier this year at CES 2022 in Las Vegas.

The German marquee is looking to create awareness about road accidents in India, which continues to witness the highest road fatalities despite a push for road safety. Mercedes Benz's first step in this direction was the launch of the third edition of its 'Safe Roads’ campaign to promote road safety awareness.

The first two editions of the campaign were held in 2015 and 2019. In its latest edition, a special focus was laid on the role of sustainability-oriented vehicles in the future. This edition was also hosted at the Mercedes-Benz Research and Development India (MBRDI) offices in Bengaluru on December 13.

Road safety a concern in India

India reported over 1.5 lakh road fatalities in 2022 so far. More than 60% of these deaths come from only 5% of the highways in the country while excessive speeding accounts for 56% of the fatal accidents, data from Mercedes Benz found

The focus of this edition was on different aspects of road safety that included ‘Child Safety and Vulnerable Road Users on Indian Roads’ and ‘Automated Driving and Future of Road Safety in India’. It tied in with the overall theme for the event—leading safety with sustainability at the core.

“We launched ‘Safe Roads’ to create awareness about the significance of road safety, and share best practices with future road users with an aim to reduce India’s alarmingly high road accident fatality rate," Manu Saale, MD and CEO, MBRDI said. "Our journey of promoting road safety across the country, first, through road shows in eight cities and now with the SAFE ROADS India Summit, has been very fulfilling."

In line with United Nations Sustainable Development Goals (SDG 3.6 and SDG 11.2), Mercedes Benz recently announced Vision ZERO 2050—a commitment to reduce road fatalities to 50% by 2030, as per the 2020 numbers, and achieve the goal of accident-free driving globally by 2050.

This ambition is fuelled by ‘real-life safety’ philosophy and powered by the its own Accident Research unit, which has experience of analysing real-world accidents for over 50 years. In recent years, the research was expanded to include some locations in India with an aim to make accident-free driving a reality across all markets.

Commenting on the same, Prof Dr Paul Dick, Head of Vehicle Safety, Mercedes Benz AG said, “Mercedes-Benz is the pioneer in vehicle safety. ‘SAFE ROADS’ is a commendable initiative that underlines all aspects. To reinforce our commitment to make roads safer, globally, we announced our commitment to the vision of accident-free driving by 2050.”

The 2022 Safe Roads Summit also marked the maiden appearance of Mercedes Benz Vision EQXX in India. The concept electric car is highlighted for its mind-boggling range of over 1000 km on a single charge. Powering the EQXX is a 100kWh battery which has a high energy density of 200 Wh/kg, making it 30% percent lighter than batteries with comparable capacity.

This battery drives a 150kW electric motor, that is claimed to be 95% efficient, belting out 241 bhp at the rear axle. The EQXX is considered to be one of the most efficient electric vehicles (EVs) which is able to achieve around 10 km per kWh, almost double the EQS on the WLTP cycle.

The efficiency of the EV is enhanced thanks to a splendid aerodynamic design with a superior drag coefficient of 0.17. Further aiding the car’s efficiency is the use of 117 solar cells on the roof. These solar panels help it get up to 25 km of additional range, over the course of a day.

Driven by the idea of zero impact on the planet and highly responsible use of green energy, the EQXX prototype offers a clear indication of the route taken by Mercedes Benz as it strives to be all-electric by 2030. Unfortunately, Mercedes isn’t thinking of bringing the Vision EQXX to series production anytime soon.