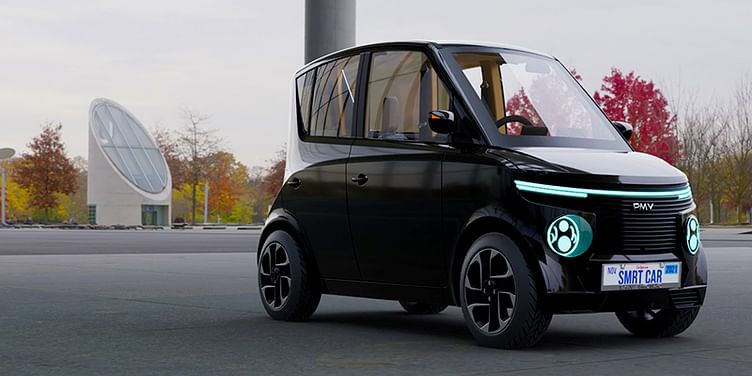 PMV EaS-E is being offered at an introductory price of Rs 4.79 lakh (ex-showroom) which is applicable for the first 10,000 buyers.

Mumbai-based ﻿PMV Electric﻿ has launched its first electric four-wheeler vehicle, EaS-E, in the Indian market. Priced at Rs 4.79 lakh (ex-showroom), EaS-E is essentially the most affordable electric car in India at present, though it isn't a full-fledged passenger car and technically qualifies as a quadricycle.

Pre-orders for the ultra-compact EV has started at a token amount of Rs 2,000, while deliveries are expected to begin from mid-2023 onwards.

According to a statement by PMV (Personal Mobility Vehicles), it has already received over 6,000 pre-orders for the micro electric car from India and overseas.

EaS-E will be offered with a three-year/ 50,000km warranty and will be manufactured at the company’s Pune-based facility. The electric quadricycle has a dual-cab layout with space for two occupants, including the driver.

The biggest highlight of EaS-E is its compact proportions with an overall length of 2,915mm, a width of 1,157mm, and a height of 1,600mm, along with a wheelbase of 2,080mm and a ground clearance of 170mm. The size is comparable to Bajaj Qute, the only other quadricycle available in the Indian market, which measures 1,312mm wide,  2,752mm long and 1,652mm tall.

EaS-E is smaller than Tata Nano, which was one of the smaller passenger vehicles to be sold in India. To put things into perspective, Nano measured 3,099mm long, 1,495mm wide and 1,652mm tall, with a wheelbase of 2,230mm and a ground clearance of 180mm. EaS-E tips the weighing scales at just 550 kg.

In terms of looks, EaS-E appears to be a quirky little vehicle from the exterior featuring a sealed-off grille up front. The grille panel is flanked by circular LED headlamps on both sides and headlined by a thin strip of LED DRL spanning the width of the front fascia. The side profile sports a minimalist design with a roofline swooping upwards at the C-pillar to create more headroom for the rear passenger.

The rear end of the micro electric car mimics the front, featuring a thin LED light bar as its tail-lights along with two circular auxiliary lamps in the rear bumper. EaS-E will be offered with multiple exterior colour options including both single-tone and dual-tone themes.

There are two LCD screens mounted on top of the dashboard–one for the driver’s display and the other for multimedia. The latter is embedded with onboard navigation and smartphone connectivity. The electric quadricycle benefits from a number of smart features including connected car tech, remote parking assist, follow-me-home lights, single-pedal driving, and more.

Powering PMV EaS-E is an IP67-rated permanent magnet synchronous motor mounted on the front axle that produces 13 bhp and 50 Nm of peak torque. This motor draws energy from a 48V lithium-iron-phosphate battery pack which can be charged either via a 15A outlet or a 3kW AC charger. The battery capacity has not been revealed yet.

As for performance, PMV claims a 0-40 kmph acceleration time of under 5 seconds while the micro electric car can reach a top speed of 70 kmph. There are currently no rivals in this space for EaS-E but it is likely to face competition from the likes of MG Air EV and Vayve Eva which are set to launch next year.