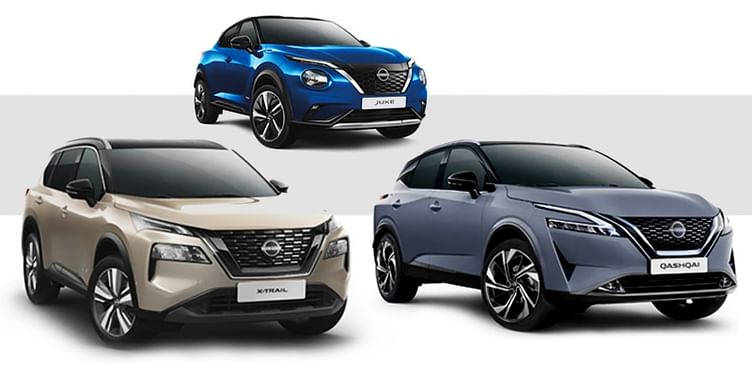 Nissan is betting big on SUVs/crossovers with hybrid powertrains in the Indian market, reluctant to bring EVs to the country in the near future.

In its pursuit to bring change, the company launched the Magnite subcompact SUV in late 2020 which has since driven the bulk of its sales volume. However, other than Magnite, the company currently possesses a very thin portfolio of models comprising Kicks and the completely built-up (CBU), imported GT-R sports car that generate negligible sales volume.

Nissan is now aiming to turn the tide by bringing an onslaught of SUVs to the Indian market. The carmaker has revealed three SUVs from its global lineup that could make their debut in our country in the near future— Juke, Qashqai, and X-Trail. The Japanese brand has already started testing the latter two on Indian roads while studying the feasibility of Juke in the country.

X-Trail to be launched first

Out of the three models, Nissan said that X-Trail will be launched in the country first although no definitive timeline was revealed. The X-Trail moniker isn’t new to India as the SUV was previously on sale in the country in its first and second-generation guises. Currently, in its fourth generation, the latest version of X-Trail made its global debut last year.

The fourth-gen X-Trail retains the upright stance of the previous generation models accompanied by modern touches including the prominent V-Motion grille flanked by a split headlamp setup up front. Available in five- and seven-seat configurations globally, the new X-Trail is underpinned by the modular architecture concept of the CMF-C platform that has been co-developed alongside alliance partner Renault.

The latter is a combination of a three-cylinder internal combustion engine (ICE) paired with an electric motor. In this case, the vehicle is powered only by the electric motor while the ICE acts as a generator to charge the batteries. The engine never drives the wheels, hence, essentially it is an electric vehicle. This powertrain is available in both front and all-wheel drive (AWD) configurations.

The front-wheel drive strong hybrid variant dishes out 201 bhp and 330 Nm of peak torque whereas the AWD variant pumps out 211 bhp and 525 Nm of torque. Given its premium positioning, the X-Trail is loaded with multiple creature comforts including three-zone climate control, a powered tailgate, a panoramic sunroof, all-LED illumination and more.

If and when launched, X-Trail will be Nissan’s flagship SUV offering and will compete against the likes of Volkswagen Tiguan, Skoda Kodiaq, Hyundai Tucson, Jeep Meridian and Toyota Fortuner.

Nissan also displayed two other global crossovers— Qashqai and Juke— that may hit showrooms in India in the future. Both command a smaller footprint and flaunt a more angular stance as compared to X-Trail. That said, styling elements like a V-Motion grille flanked by a split headlamp setup are common across the SUV lineup.

Qashqai has a more striking appearance thanks to its boomerang-shaped headlight clusters and a sporty front bumper. On the other hand, Juke sports an unconventional design— the most prominent highlight being the circular headlamps. Juke also has a sharper roofline slope, almost like a coupe. While the Qashqai showcased is in its third generation, the current Juke is a second-gen model.

Both crossovers are powered by electrified powertrains. Qashqai offers two engine options— a 1.3-litre turbo-petrol mild-hybrid powertrain and a 1.5-litre e-Power strong hybrid powertrain. The former churns out 154 bhp and 250 Nm of peak torque while being mated to either a six-speed manual or a CVT automatic gearbox.

The latter is a detuned version of the one offered in X-Trail, dishing out 187 bhp and 330 Nm of peak torque. Juke offers two engine options— a 1.0-litre turbo-petrol mild-hybrid unit or a 1.6-litre e-Power strong hybrid unit. The former produces 115 bhp while being mated to a manual or a DCT gearbox, while the latter cranks out 143 horses.

Honda, Sony join hands to develop EVs, first model to be out by 2026

Strong hybrid powertrains on both models are capable of running solely on electric power at slow speeds. It appears as though Nissan intends to position all three SUVs as premium offerings with steep price tags and lower levels of localisation. Things will hopefully be clearer in a few months when Nissan releases the first model of the lot.