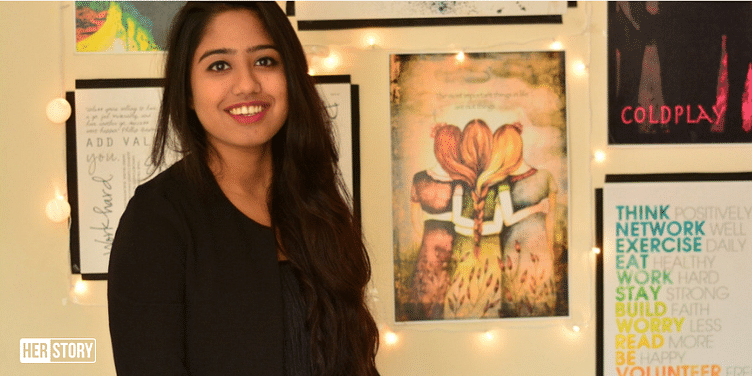 The author’s debut novel On The Open Road - Three Lives. Five Cities. One Startup delves into fictional lives of three characters who are bitten by the entrepreneurial bug.

What happens when three twenty-somethings begin to get restless with whatever they are doing at the moment and want to break free? Kabir wonders how life would be if he were to build something on his own. Myra wants to escape her cubicle. Sandy drops out of college to pursue the next big startup idea, and the three are united by Ramy inspires millions on his travel blog… But their journey is far from perfect.

In her book, On The Open Road - Three Lives. Five Cities. One Startup, debutant author Stuti Changle explores the lives of these young people as they attempt an empowering journey to start up a company. Will they succeed on the road less travelled?

In an interview with HerStory, Stuti tells us all about the book, her inspirations, and why she chose to write on startups.

HerStory: Tell us a little about yourself.

Stuti Changle: I hail from Indore and completed my schooling from various schools across India. I am a postgraduate in management from International Management Institute, New Delhi, and a graduate in Computer Science and Technology. I have dreamed of being an author since childhood and one day, in 2016, when I was 23, I packed a rucksack and left Mumbai, in search of my true self. I met people with extraordinary stories - travellers, entrepreneurs, artists, visionaries and saints, who gave me the revelation to take steps in a new direction. I penned my debut novel - On The Open Road - Three Lives, Five Cities, and One Startup. I am glad that it is now receiving a tremendous response from readers. It draws from my real-life experiences and I wish to inspire my readers to follow their heart and live their dreams!

A traveller at heart, I find myself moving farther from the never-ending quest of owning material possessions and a step closer to owning a vast ocean of experiences.

HS: What prompted the book, and why?

SC: On The Open Road - Three Lives. Five Cities. One Startup happened during my stint at a major corporate. I was sipping a cappuccino and wondering about my next career move. I was making money - a lot of it - but somehow felt empty on the inside. My heart would tell me to pursue my long lost dream of becoming a storyteller, whereas my mind would warn me about the risk and its consequences. Later on, I realised that a lot of millennials, including my friends and colleagues, struggled with a sense of meaning in their lives and wondered about their true purpose. All this led to the development of the characters and the plot of the story. That’s a reason why a lot of my readers tell me that they can relate to each and every line of the story. I hope to inspire the youth with my stories - to break free, to make difficult choices, to follow their dreams, to never give up, and to discover their true self!

HS: Can you tell me more about the premise of the book, how you chose the characters, etc?

SC: The book is a heart touching and an inspiring journey of three souls who resolve to pursue their dreams and battle against all odds to start up a company. Myra, Kabir and Sandy, the main characters of the story, are twenty-somethings from young India who battle societal taboos as well as their inner demons to live life on their own terms.

Myra is struggling at her corporate job while Kabir wonders how life would be to build on his own. Sandy is the quintessential startup enthusiast who doesn’t fear failing, and keeps at his vision. They’re all united by a travel blogger - Ramy, who runs the blog called ‘On The Open Road’.

The story is about breaking free from routine lives to be able to embrace the new. It encapsulates the emotional journey that one has to take to be able to live their dreams. Through my novel, I want to say it out loud that we, the youth, are the future of the nation, and it is time we boldly pursue our choices. Let’s build the India of the future through entrepreneurship, because each one of us, no matter where we come from, has that one idea that holds the potential to touch a million lives.

HS: Why did you choose the startup world and 20-somethings as the theme on which your book revolves?

SC: My heroes or role models have always been artists and entrepreneurs. When I quit my job, many entrepreneurs became my go-to people to take career advice from. At the same time, I followed the journey of tech startup founders from India on YourStory. The startup culture in India is mushrooming in all major cities; students or professionals are more willing to embrace the risks and failures of starting up given they can positively impact a million lives someday.

It is truly inspiring and I felt that India lacked a strong fictional narrative in books and movies on the same. Fiction has the power to move people through the magic one can weave using words. While we had a lot of new articles that mentioned the non-emotional aspects of starting up, bringing out the emotional struggle could only be justified through a story. Twenty-somethings are building phenomenal ventures in India. Also, we have a major population in that segment, and it made sense that I encouraged them to “make a move” through my story and help build the India of the future through entrepreneurship.

HS: You say your book is drawn from real-life experiences. Can you tell us more about this?

SC: Yes, that’s true. It draws hugely from my experiences when I quit my job and decided to take the plunge. I do relate to Myra the most as her journey is much like my own. Characters, ordinary or larger than life, relatable or aspirational, are the most crucial part of the story. Readers experience various emotions through the journey of the characters. Readers evolve through the challenges, the struggles and the achievements of the characters. They feel inspired enough to take specific action if they are thrilled by the journey of their favourite character.

All the characters are based on people whom  I have met and therefore are relatable. A strong supporting character, Mr Kashyap, is inspired by Ashish Kashyap (founder of Goibibo and redBus). I had never met him until the completion of my book, but as I look up to him as a role model in the startup world, I built the character through some secondary research and my own imagination. On completion of the book, I reached out to him and told him about the same. He found the idea of a fiction story on startups really amazing and encouraged me to keep at my creative work.

SC: Apart from writing, I also take up speaking engagements, and travel to places telling stories that add value to my audiences. My mission is to inspire people to become the best version of themselves through my stories. I am also working on the next story. It is a part of On The Open Road series, but is a standalone work of inspirational fiction again, and not a prequel or sequel exactly. Ramy - the travel blogger, the favourite character from On The Open Road, is part of the next one too.