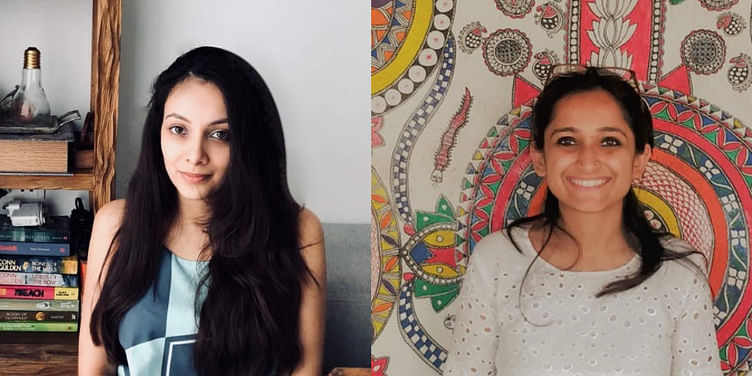 The startup hopes that with the TruCup and consistent awareness about menstrual health and regressive mindsets will change.

It is 2019 and sanitary napkin ads still use blue liquid to show blood. They also show incredibly happy women on their periods – a misnomer on so many levels.

In India, there is little understanding about menstruation and menstrual care products. Although sanitary napkins are used among the urban and upper class population, their disposal still remains a huge problem.

They named their invention Tru – menstrual cups that are lasting, hygienic, reusable, and environmental friendly. For the entrepreneur duo, TruCup stands for the truth about menstruation, spreading awareness on menstrual health and hygiene, and giving better options to a large audience.

That ‘time of the month’

Shimla-based Alakshi Tomar, 28, has a postgraduate certificate in Human Resource management from XLRI, Jamshedpur. She has worked at Accenture, and was a Gandhi Fellow at the Piramal Foundation for education leadership.

Shivangi Bagri, 29, from Rajasthan, is a graduate in Design and Business Administration from Lasalle College of Arts in Singapore. She was previously Director, IC Green Solutions, a freelance stylist, and a editor at Singapore-based Affluent Magazine, World Business Magazine, and Vogue (Condenast).

The two became friends in school, and remained so even when they moved to different cities for higher education. They were clear about one thing – with the education, experience and exposure they had – they wanted to change the world for the better.

Shivangi is a yoga teacher and diving enthusiast. But during her periods, like most other women, she was in pain, tired, and listless – unable to do much for an entire week.

While working in schools in the slums of Mumbai, Alakshi saw first-hand the problems around menstrual health and hygiene. She discovered the many myths surrounding it - like period blood being labelled ‘dirty’ and girls not bathing during ‘that time of the month’. This was a major reason for dropouts at school and a life filled with taboos. Also, society looked at a menstruating girl as one of marriageable age, and hence, early pregnancies happened too often.

Like most urban women in India, both Alakshi and Shivangi used sanitary napkins. But when they began using menstrual cups, their mindsets changed.

A chance WhatsApp conversation led to Shivangi and Alakshi exchanging notes and they realised that they were the only two people using cups in a group of 15 friends from school. The two figured there was an urgent need to create the perfect cup for all menstruating women. It was designed by Shivangi, following the experiences of design students who used the cups and their own.

Alakshi explains, “Sanitary pads contain synthetic fabrics, fragrances and chemical coatings, which can cause allergies and even cancer. Add to this, the environment is getting polluted with garbage accumulating over the years.”

(It is estimated that 12,000 tampons and pads are disposed of by a menstruating woman in her lifetime. But brands like Carmesi, Purganics, and Saathi offer environmental-friendly sanitary napkins.)

The duo researched for about nine months, to understand menstrual cups and its landscape in and outside India, and conducted surveys among users and non-users.

“We were figuring out the gap and need in the market, creating non-negotiables for the design, communicating with manufacturers, and personally sampling over 80 cups and reiterating the design based on comfort and ease of use,” says Alakshi.

Once both were comfortable with the design, they gave the cup to friends and family as a trial run. Since most of the feedback was positive, TruCup did a soft launch on its website in October 2018.

Unlike pads, which need to be changed frequently, TruCup can last for 8-10 hours in a day. (And one can last for 10 years.)

TruCup’s menstrual cups come in two different sizes now. They will be adding more sizes soon according to the flow and size of the vagina.

According to the World Health Organisation (WHO), there were 355 million menstruating women in India in 2018. A National Family Health Survey (NFHS) survey last year found that 62 percent women in the 15-24 age group use cloth for menstrual protection. Poor hygiene during periods often cause reproductive tract infections, depression, fear, and frustration, causing low participation in the workforce.

What Alakshi and Shivangi set out to do was to create a new demand in the market. The menstrual cup is a very niche product. To bring them into the mainstream, which is dominated by sanitary napkins, TruCup was introduced as a product for the masses.

Alakshi explains, “We felt the cup should be easy for new customers to use. Hence, we tried to address the inhibition of insertion and fear of removal through use-based perspective. In every workshop, we shared our personal experiences and the advantages of menstrual cups.”

Comfort for the “virgin”

Compared to sanitary pads and cloth pads, Alakshi claims, TruCup doesn’t cause discomfort as it is inserted inside the body and cannot be felt. However, she says that many girls fear that their hymen will be damaged and they will lose virginity with the insertion of menstrual cups.

“We have to explain the concept of virginity to them, and that it is disconnected to breaking of hymen. Only having sexual intercourse would mean you are not a virgin. We show anatomy structure, which shows where the hymen lies,” Alakshi says.

(The hymen can also break during playing various sports. However, while using the cup, it might stretch, tear, or remain unaffected. There are also some women who are born without it.)

During awareness workshops, Alakshi often gets asked if the use of cup will increase the vagina size. She explains, “A lot of girls tell us that their mothers won’t ever allow them (in schools and even colleges). We are not always able to convince them, but slowly and surely, there are a few gutsy women who are able to break through their conditioning.”

To be clear - pelvic and vaginal muscles are tighter in teenagers and virgins. So younger menstruating women are recommended to use a smaller TruCup.

Although there is no research or scientific proof that menstrual cups reduce pain, Alakshi claims that customer feedback has been along those lines. “While there is zero discomfort compared to sanitary napkins, most users say their period cramps are much lesser with cups.”

At present, TruCup only sells online – via its own website, Amazon (US), Lazada (Singapore) and Shycart (online seller of sexual wellness product in India). It will soon start selling on Amazon India, Flipkart and Nykaa. The founders are also in talks with a few (offline) pharmacies, retail stores, swimming gear shops, etc. Trucup products are manufactured at an FDA approved facility in China. It plans to bring the machinery to India in the next three years.

A TruCup is priced at Rs 999 for the urban audience, and Rs 399 for rural audience. Alakshi said that they are figuring out location-based filters to show the price differences on online shopping platforms. The duo sells it for discounted prices during their workshops in rural areas.

Although there are menstrual cups from other companies at relatively lower prices, TruCup aims to subsidise the cost in the long run by increasing revenues and decreasing production cost.

According to Alakshi, they reinvest some of their profits into their social interventions, and are trying to build a hybrid organisation.

Collaboration with a larger ecosystem

TruCup’s total investment, mostly from friends and the founders’ own savings, is Rs 10 lakh.

In order to minimise cash burn, the founder-duo has no full-time employees (only interns) and work out of their homes. Their investors draw minimal or no salary, and founders’ compensation depends on revenue. Most of the marketing is organic, therefore keeping customer acquisition cost low. Also, whenever they conduct awareness workshops outside NCR, they find volunteers for execution.

TruCup tries to spread awareness on menstruation by providing in-depth knowledge, tools, processes, and products for menstrual management through partnerships. Among them is ‘Spreading your wings’ - a comic book about puberty and menstrual hygiene. Also, sustainable fashion brand Swara provides upcycles pouches for TruCup, in which the menstrual cups are stored.

It also works with online influencers and individuals who are ready to try the cup and share their experience on social media.

NGOs like Raah Foundation and Singapore-based HER Planet Earth spread awareness during their own exhibitions and workshops. Two NGOs which focus on India’s rural villages - United for Hope and Sacchi Saheli - utilise TruCup’s products during workshops. The company also conducts workshops to promote the use of menstrual cups.

It plans to work with more NGOs and run pilots by giving cups for free to a small group of women so as to track usage patterns, experience, and behaviours.

Alakshi adds that they will also train a few women to sell the product within the community at a subsidised cost, with a percentage of the profit. The duo also has individual women sell the product to local shops and within their communities.

For the near future, TruCup’s focus is on sales, spreading awareness on menstruation, improving product performance, and launching more menstrual care products.

Since they are based in Delhi, it has access to central and state governments, as well as NCR, Rajasthan, UP, Haryana, Uttarakhand and Himachal Pradesh - states that have a low level of menstrual awareness.

TruCup is currently available in Singapore, and will soon launch in Vietnam and Philippines. “South East Asia has low awareness of menstrual health and hygiene. We want to break that taboo,” Alakshi tells YourStory. Trucup ships all over the world.

Menstrual cups have been available in India for in 8-10 years now, although it is yet to catch up widely. International brands like Eva, iCare, and Wow, along with Indian startups like Hygiene and You, Sikycup, Boondh cup, and Stonesoup, are making it more mainstream now. Considering the size of potential customer base, there is space for multiple players, and TruCup joins the club with great confidence.

A new revolution for women’s health is definitely on the way.