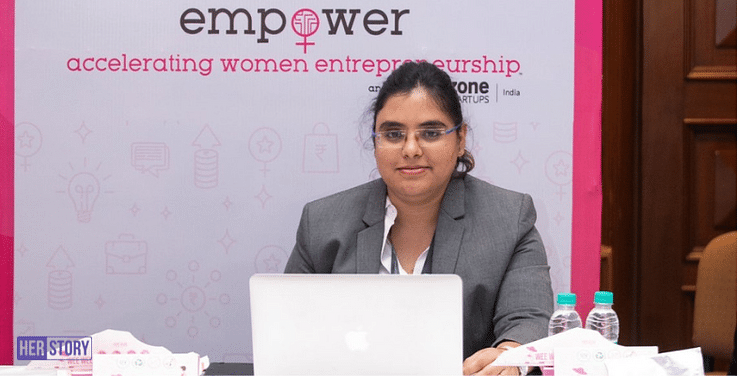 Poonam Gupta, Founder of WeeSure, claims theirs is the only device in the world that allows women to stand and test for pregnancy in one go without the collection of urine in any apparatus, making it hygienic and hassle-free.

Most at-home pregnancy tests involve either peeing into a cup and then dipping a stick into it to test for pregnancy or using a dropper to collect urine and add it onto the device. Some involve collecting the urine for test in a lab. Often, this process is messy and unhygienic to an extent.

WeeSure, a pregnancy testing device developed by Poonam Gupta, does not involve storing or collecting urine in a dropper or a cup. It is a modern pregnancy device shaped like a funnel, which allows you to stand and pee into, and indicates your pregnancy status in just 60 seconds. You don’t even have to sit on the toilet or soil your hands in any way.

Poonam Gupta did not set out to become an entrepreneur. Hailing from a bania family in Dhanbad in the Wasseypur region of Jharkhand, it was quite a feat for her to even step out of her small town and pursue a higher education.

“I come from a family that does not set much emphasis on girls’ education. I was the first girl in my family to pursue an engineering degree, later an MBA, and also work with multinationals. Seeing my determination and success, the other girls in the family were also ‘allowed’ to pursue their dreams,” she says.

After completing her engineering degree from Bhubaneswar College of Engineering, she began working with Robotic Wares Pvt Ltd. After two-and-a-half-years there, she moved to Noida to do an MBA from GT University.

“On completing my MBA, I was recruited by HCL and spent two-and-a-half years in the company as an IT consultant. I got married and after a while, decided to leave my job wanting to do something different in my life. Mid-way through this decision, I got pregnant and left my job in the beginning of 2017,” Poonam recalls.

While spending time at home, Poonam would actively read and browse through the internet searching for ideas to start up. Her husband was an entrepreneur himself and she was assured of all the support in case she ventured out on her own.

The turning point came during her pregnancy when she had to perform a number of tests at home. “The process of these tests were messy and I thought why not make it convenient and easy. I found the stand-and-pee device in the market and decided to do something innovative with it,” she says.

And thus was born WeeSure, a pregnancy device shaped like a funnel with a strip inside to test pregnancy. All it needed was a minimum amount of urine to know the results within 60 seconds.

Poonam took the device to many clinics in Noida and received a favourable response. She also got the device endorsed by a gynaecologist at Apollo Hospital who advised that if marketed well, WeeSure would become quite popular.

Birth of a startup

The entrepreneur has filed for a utility patent as well as a trademark. Once she gets the trademark, she hopes to launch it in a big way on all ecommerce websites by next month.

“I did a test run on some ecommerce websites and on our own website, and sold 150 kits in just 15 days. It is not only convenient but is also affordable at Rs 75 per kit,” she says.

In just under a year, Poonam has received the 'Top Entrepreneur' award from 'Empower 2018', and is all set to visit Canada as part of the Market Access Programme initiated by the Canadian government. She also won Rs 5 lakh as seed funding from Empower, and put in Rs 8 lakh of her own money to start WeeSure. The entire manufacturing process has been outsourced and Poonam only manages marketing and distribution.

“I believe ours is a one-of-a-kind product in the market. Funding will help us scale further, market and distribute well. Though it’s a low cap investment, we will not be able to expand without funding. We hope to break even in the next three years,” she says.

Poonam admits that penetrating the ecosystem and the market has been challenging. “It is difficult managing a business and family responsibilities. My husband has been my biggest strength and has helped me at every step,” she adds.

When asked about expanding the product line, Poonam says she is cautious. “I need to focus fully on WeeSure first and make it viable and profitable. Later, I can look at different innovations in the same product. That will depend upon how well we do, and whether further models can be scaleable.”