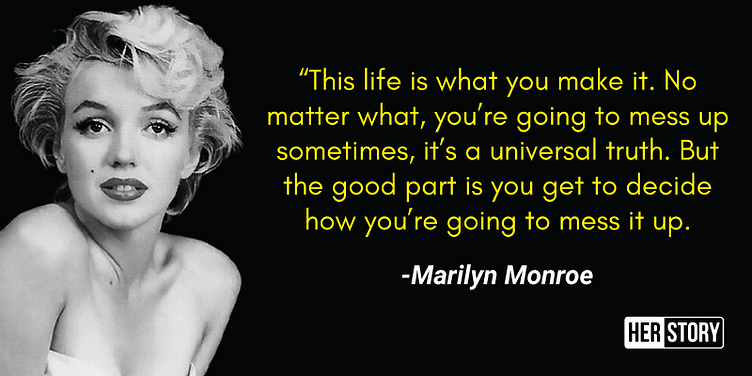 "This life is what you make," and more inspirational quotes by Marilyn Monroe on life and love will inspire you to move forward and keep smiling.

Marilyn Monroe was an actor and icon, and beyond that stunning image of her in the “flying red dress” was a woman, extremely witty, sophisticated and intelligent.

The name Marilyn was inspired by stage actress Marilyn Miller who starred in many Broadway musicals in the 20s and 30s, and whom Ben Lyon personally knew, while Monroe was Jeane’s grandmother's last name.

Some of her famous films include Gentlemen Prefer Blondes, The Misfits, Some Like It Hot, and The Prince and the Showgirl.

While some idolised Marilyn Monroe purely for her good looks, and glamorous lifestyle, she faced many ups and downs in her life. She struggled with alcoholism, substance abuse, anxiety and lack of self-esteem. However she managed to keep going, and strove to constantly better herself at her craft; acting.

Here are the top fifteen Marilyn Monroe Quotes about life and love that will inspire you, and leave you smiling.

“A wise girl knows her limits; a smart girl knows that she has none.”

“Boys think girls are like books, if the cover doesn't catch their eye, they won’t bother to read what’s inside.”

“I’m selfish, impatient, and insecure. I make mistakes. I am out of control and at times hard to handle, but if you can’t handle me at my worst, then you don’t deserve me at my best.”

“Imperfection is beauty, madness is genius, and it’s better to be absolutely ridiculous than absolutely boring.”

“Keep smiling because life is a beautiful thing, and there’s so much to smile about.”

“Respect is one of life’s greatest treasures. I mean, what does it all add up to if you don’t have that?”

“You never know what life is like, until you have lived it.”

"A woman knows by intuition, or instinct, what is best for herself."

“I never wanted to be Marilyn - it just happened. Marilyn’s like a veil I wear over Norma Jeane.”