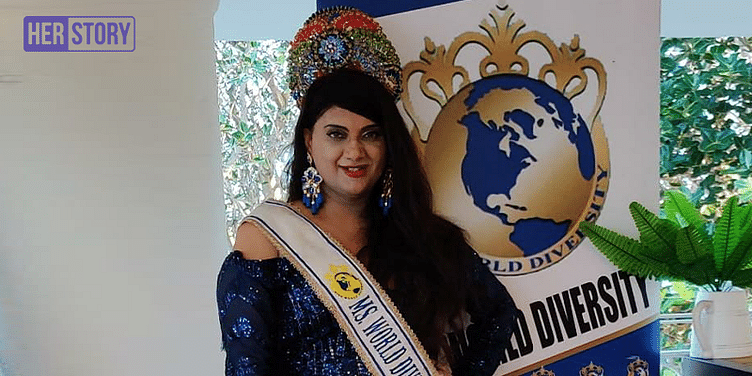 Naaz Joshi is the first Indian transgender woman to have won the Miss World Diversity crown consecutively for three years. Abandoned by her family as a child, she has overcome many hardships to get here.

Naaz Joshi was recently crowned the Miss World Diversity 2019 for the third consecutive time. The pageant was held in August in Mauritius with 14 countries participating in the pageant, including India.

“Winning this award, I feel like I’ve not only done something for myself but my community as well. This win is dedicated to the transgender community. I believe the title brings responsibility and power to voice out opinions in the world. I would like to work for trans empowerment, HIV and AIDS kids, and domestic violence over the next year,” she said.

But it has been a long and arduous journey for Naaz. Abandoned by her family as a child, she was molested, faced abuse, worked in a dance bar, and eventually got a degree from NIFT, but the Miss Diversity title gave her another stage to shine.

Naaz spoke to HerStory about overcoming the worst time in her life to gradually building it up and embracing motherhood. Despite her success, she still struggles to find a 9-5 well-paying job, and has to resort to sex work to support herself and her daughter.

Being abandoned and surviving

Naaz was born as a transgender in Delhi in 1980 in a lower middle-class family. She was named Aiyaz, which she later changed to Naaz.

As a child, she was different and was bullied by the society and her relatives. “My childhood was a nightmare, and I was discriminated by everyone, got stared at, and heard taunts. I was abused verbally and physically for no fault of mine,” she says.

She was abandoned by her parents at the age of seven, and sent to her uncle in Mumbai. But it didn’t help, and only made things worse. Instead of toys, she had to do menial jobs in dhabas and restaurants to fend for her school fees. Her aunt made her do all the household work in the mornings, and she worked in a dhaba in the evenings after school.

But there was no end to her miseries, as she was gang-raped by her cousin and his friends at the age of 11. She found herself on the death bed, but her uncle asked her to keep quiet on this matter. As she was left in the lurch in the hospital, she met a transgender who helped her find a job at a dance bar, where she worked for seven years.

Despite the trauma she faced, she completed her schooling in 1998. Around that time, she met one of her cousins, a well-known model, who inspired by her, sponsored her NIFT education. She got her campus placement, and even worked with fashion bigwigs like Ritu Kumar and Ritu Beri with the designing and merchandising.

In 2013, Naaz underwent a sex reassignment surgery and started her modelling career.

“When you live your life all the way alone, and manage your sickness and mental breakdowns, you become strong. For me, undergoing surgery or having hormonal changes was nothing in front of the pains I have undergone in my life,” she says.

Today, Naaz is the first transgender woman from India to have appeared on a magazine cover, and has also endorsed a sanitary napkin advertisement.

“Today, at 35, I am single, and I wish I had a partner. I don't have money to support my facial feminine surgery. I don’t have a 9 to 6 job, I organise beauty pageants that gives me very little money to survive. I am looking for a job, but my gender and my age have become a barrier to find a decent and secure job,” says Naaz.

She has also been creating awareness amongst the youth on gender sensitisation through guest lectures in various colleges and universities across India, and has done workshops in IIM Udaipur, Atma Ram College in South Campus (Delhi), Tagore International School in Vasant Vihar (Delhi).

Even the Miss Diversity pageant happened when she sent her pictures by mistake to the organisers and they selected her.

Naaz says, “Next year, I shall represent India at Belgium for Miss International Trans 2020. My idea to be in pageants is to bring power to me and with that, I want to change the current status of women and transwomen in the country.”

However, for Naaz, what has drastically changed in her life is motherhood - when she adopted a 10-month-old girl.

She says, "Motherhood is magical, it changes a woman completely, it brings in more responsibility. Today, I just don't live for myself, I live for my child as well. I can do anything to bring a smile to her face. I shall make her a strong human, and I shall teach her to fight her own battles. I love her a lot, but that doesn't mean I shall make her depend on me for her decisions."

Naaz is now again planning to get into sex work to earn enough money to feminise her face, body, and voice so that she appears like a woman to her daughter.

She is also getting into the gharana system where she will go door-to-door to dance and clap beg. Despite the crown and abolishing of Section 377, there aren’t many options for her.

“We still face discrimination at hospitals. It will take ages for people to change their mindset. Even while looking for jobs, people are still not open to hiring transgenders,” she says.

Today, she is looking for job opportunities in the corporate sector. But despite her management degree and great communication skills, Naaz is unable to find a job due to the discrimination.

But the big question is, who is listening?