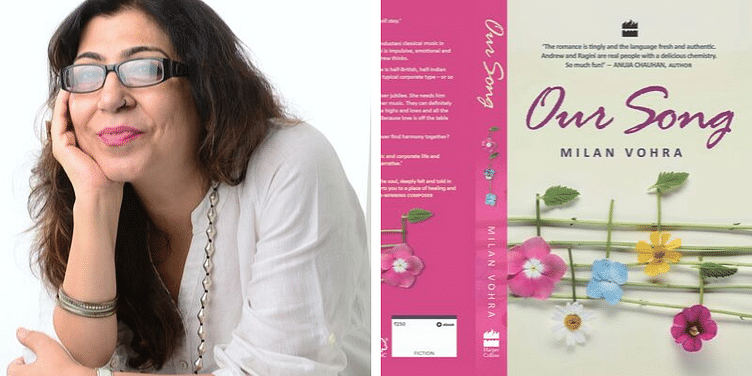 If you are a die-hard romantic, Milan Vohra is just the right author for you. Her latest book, 'Our Song', is all about music and corporate life. Will the twain meet? Find out for yourself.

Romance as a genre can never go out of fashion. How many of us still turn back to good old-fashioned romances like Mills & Boons novels for those elements of mystery, intrigue, unabashed admiration, unrequited love or happily-ever endings?

Following its huge success, Milan wrote Tick-Tock, We’re 30. It is about a group of 12 friends who made a pact to meet when they all turned 30, which has now been acquired for the screen adaptation of a Bollywood movie.

Her latest, Our Song, is another romance that revolves around a struggling music composer, and how the two contrasting worlds of music and a corporate life come together.

In a conversation with HerStory, Milan talks about romance, the big Mills & Boon break, and her plans for the future.

HerStory: What prompted you to start writing?

Milan Vohra: I was your typical long letter writer, journal keeper, and have been writing for as long as I can remember. I was big on debating in college, and initially I did it more to earn some money. Then the writing bug bit me. The thrill of building an argument, writing the opening, the closing, the crafting of it was my real addiction. I didn’t love the refuting, the jumping to pick holes in opponents’ arguments. Just the pure love of crafting it from beginning to end. I also started a magazine in my college, and that grew to become a big hit at all the college festivals.

As the editor of the magazine, I’d write, hustle more people to contribute, edit, get in good illustrators, cartoonists, etc. And that’s when I started writing more seriously; when suddenly I wasn’t writing for myself.. but realised I would be read by all kinds of people who I may never even meet.

HS: Why the romance genre?

MV: Writing romance wasn’t a planned thing. I had been writing short stories, which were more women-centric, about themes that impacted me or struck me more immediately. In fact, I had submitted two of those stories to an anthology by Unisun, a literary publisher in Bengaluru. It just so happened that I was published first as a romance writer. I’ve embraced that completely.

HS: You are India’s first Mills & Boons author. Can you tell us more about it, and your personal love for Mills & Boon books?

MV: The first Mills & Boon I read was at an older cousin’s place who had a trunkful of them. It was called ‘Mist Across the Moors’.

At home, there was no restriction ever on what we chose to read. When I said I wanted to read more romance, dad would pick some up for me. It was no-fuss. Having said that, for me, reading a romance, M&B’s being just one kind, was for a certain mood. It was the perfect thing after an exam, or in the holidays. I was exploring and devouring every reading material I could. From Harold Robbins and James Heriott, to Camus, Kafka, and Pablo Neruda.

I’d also been getting a few forwards about this Harlequin contest to search for their first Indian author. I’d had a title that came to me during a very boring yoga class, The Love Asana, but had done nothing about writing the story.

The whole ‘becoming the first Mills & Boon author’ thing happened as a result of a bad anniversary night. We had taken the in-laws out, the dinner had been disastrous, everything was found lacking, the chicken was too “chickeny”, the sweet was too sweet.. you know that kind of evening?

I came home and thought there has to be more to an anniversary than this. It was the last night for the Harlequin deadline. I wrote the story soon enough, by 2 or 3 am. The challenge was that I write by hand and needed help to actually key it in. A friend from my theatre group pitched in. I did manage to send it off in time.

A few days later, I was at an event in Mumbai, with a live countdown to the top ten amongst about a few thousand entries. Then the next thing I knew, I’d won. I had BBC and CNN mikes and cameras on me.

I went on to write the book, which came out a year later and became the largest selling book that Harlequin ever sold in India. In just two months, it had sold more than a Penny Jordan novel, who was their most popular author.

HS: Tell us about Our Song, its premise and the storyline... Does love have a message, or is it just an overwhelming emotion?

MV: Our Song (HarperCollins, 2019) is a romance with music at the heart of it. It is really a story about love, loss, heartbreak, and about the emotional walls we build, no matter who you are, or where you come from.

This book is about the power of music to bring hope and make you believe in love again. The character closest to me is Ragini. I’m a music junkie and an insomniac. For Ragini too, my heroine in ‘Our Song’ who is a struggling music composer, every moment has a musical imprint, in fact, much like a fingerprint. If there’s one thing this book is about it’s about finding hope and opening yourself up to love again.

HS: Is romance and chick-lit as a genre popular in India?

MV: If I may be a bit immodest, I’m of the opinion that The Love Asana was a book that did so brilliantly, it made a lot of the publishing industry sit up and take note of the huge potential for romance. There were probably a few writers writing in this space then, but the floodgates on romance writing opened round about then.

Today, I think every publisher among the top 10 has at least two romances/chick-lit books in their list, if not more. That’s my impression. And that’s great! The more people read happy-making books, the less time we have to squabble and hold grudges!

HS: Are you a die-hard romantic yourself?

MV: If that means do I believe in love, the answer is yes. Do I believe it is forever? I don’t think so. It changes, it grows, it gets old, it reinvents itself – as we do. I think love is a living thing, it’s a live emotion.

Do I believe everyone must have someone? Conceptually, no. But I’m always wonder-filled at how people find people. There is someone for everyone. It may not be for forever. It may not even be a romantic someone. But if that expectation of forever after weren’t to exist, if we knew everything, including love, can and will change, and just enjoy the now – I think we’d all be a lot happier.

HS: Do you plan to continue with romance as a genre or would you delve into other subjects as well?

MV: I hope to do both. I’ve been fond of romance as a genre without apology. I believe there’s a lot to be said for reading and viewing that helps people to smile, laugh, to escape the struggles of daily life. There’s no medal to be earned for reliving suffering in your time out (which is reading). That said, there is so much to learn from reading about others’ lives. I hope to be able to write more about other subjects. Life is short, and I want to write all the important stories that I’ve been putting on hold.

HS: Can you tell us a little about yourself…

MV: I was born and grew up in Delhi. My folks were both professors and taught at Delhi university. We were a family that had the luxury of time (long holidays when the folks’ colleges and our schools/colleges were shut. We didn’t have much money, teaching paid nothing like it does now.) So, holidays were two months long, always on a budget, and the most precious part of my childhood memories.

I’ve had a long and interesting career in advertising and a lot of it happened not by plan. The only thing by design was my being quite sure from the time I sat for the IIMC entrance exam itself was that I wanted to write. And, at that time, writing ads was the only career that let me cook up scenarios and stories and write creatively.

My first job was at Ulka Advertising and I moved to HTA and then Saatchi & Saatchi and some event management companies.