As a third-generation entrepreneur, Suchita Jain is spinning profits for the billion-dollar Vardhman Group 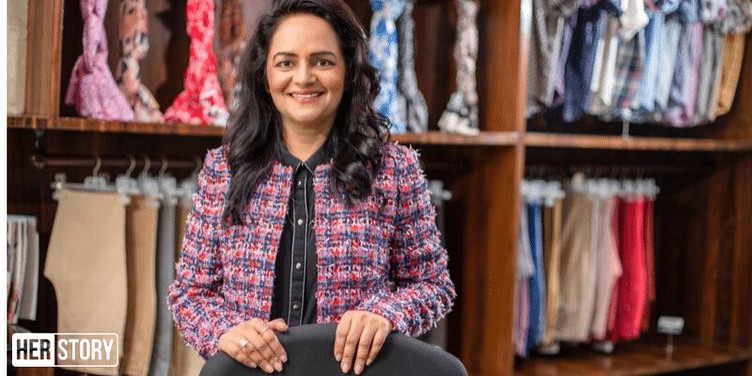 Suchita Jain has taken her family business, Vardhman Textiles, to new geographies and new heights. She emphasises that providing enough opportunities for women is at the core of the group’s vision.

When Suchita Oswal Jain, Vice Chairman and Joint Managing Director of the Vardhman Textiles Ltd, joined the family business at the age of 22, around 20 years ago, there weren’t many women at the helm of companies. But she says she never felt awkward as it “came from within”.

“There is just one key to success in any field, and that is passion. You must have junoon for whatever you do,” she says.

It is this junoon that has seen Suchita through as she set up the  woven fabric division for the group, a unit that is spinning profits.

Born in Ludhiana, Punjab, she completed her master’s in commerce from Panjab University. She also completed the Accelerated Development Programme from London School of Business, and the Special Programme on Project Management from IIM-Ahmedabad. Suchita knew there were enough opportunities within the Vardhman Group where she could contribute.

However, it still was not a given that Suchita would join the family business. She remembers visiting the factories as a teenager and in course of time, Suchita felt naturally inclined to the business of weaving and fabrics that she says, “requires a lot of attention to detail and a good sense and appreciation for colours, patterns, and fashion trends. I was able to identify a lot of areas where I could contribute significantly in bringing economies and efficiencies”.

“I could have joined any other company or started something of my own. However, when I was growing up, I realised there were opportunities in the group itself where I could contribute in bringing efficiencies, taking the company to new geographies and to new heights. Thus, there was natural synergy between my attitude, skill set, and the opportunities.”

Suchita set up the Woven Fabric Division of the group that has a capacity of more than 180 million metres per annum. The company exports yarn to around 40 countries, and the production is spread out in Punjab, Himachal Pradesh, and Madhya Pradesh, and employs more than 28,000 people. She has woven connections between Vardhman and global brands such as GAP, Benetton, and Esprit.

She also actively participates across different functions and departments, and engages herself in various CSR initiatives. Suchita has been instrumental in the group adopting a number of environment-friendly practices in manufacturing as well.

“I can say with a little bit of pride that I have been instrumental in making Vardhman Group country’s largest textiles conglomerate engaged in manufacturing of yarns, fabric, threads, fibre, and garments with a total turnover of nearly $1.1 billion today.”

The CSR initiatives are really close to her heart. “We have been able to augment or set up physical infrastructure in many schools, including setting up of classrooms, toilets, desks, water purifiers, and other such arrangements that ensure children and teachers can focus on education and not worry about health issues. We are also helping Sri Aurobindo College of Commerce in Ludhiana to construct ‘Mother Auditorium’ in the college. I am also involved in a new CSR project, which is called ‘Nandini’. It’s an initiative to help rural women and young girls break the silence on menstrual hygiene and health.”

In fact, the group has employed 1,000 women at its location in Madhya Pradesh, where they are also provided with hostel facilities.

Apart from those mandated by law, Suchita emphasises that ample opportunities for women are at the core of the group’s vision. This includes continuous training sessions so women can take up leadership positions and bigger responsibilities.

Traversing the highs and lows

Suchita speaks of the period between 1992-99 when the fabric business was in its nascent stages, and she had to face some major challenges. These included achieving operational excellence, human resource training, skill enhancement, marketing, and profitability.

“The decision to serve the toughest quality conscious market of Europe within a year of inception shortened the gestation period. We achieved what we set out to do, despite the quota regime and anti-dumping duties,” she adds.

According to Suchita, the highs have “not been coming in bits and pieces, but in a continuous flow forming a beautiful stream”.

“Ever since I joined the Woven Fabric Division of the group back in 1990s, it has become one of the growth engines, and is still expanding and growing. Because it is still growing and we, as a group, are able to add to new foreign destinations for exports every now and then, I think the highest high is still to come!”

Suchita is married to Sachit Jain, and has two daughters, Saumya and Sagarika. Both were very young when she joined the business. “I would juggle between work and family, but got adequate support from my husband and family members. My husband always encouraged me. Now my girls are grown up so I can dedicate more time to the business.”

Is it still difficult to be a woman entrepreneur in India? The entrepreneur believes things have changed now, and women are not only leading many businesses, but are also mentoring men in their businesses and in various other capacities.

“They have outlived the stigma or the mindset that they are good only for managing homes and bringing up children. They have broken many of the notions that are attached to them by the society. Women are transforming the business culture, and I am happy to be part of the change,” she says.

Though the Vardhman Group currently has a turnover of nearly $1.1 billion, Suchita believes they have only just scratched the surface.

“We want to grow this manifold, and export to even more countries, thereby establishing the finesse of Indian workers and entrepreneurs. India has tremendous potential and Indian companies can really do well in the international arena,” Suchita says.

Struck by polio at 1.5 years, this Sivakasi-based woman entrepreneur fought the odds to start G...

How this woman entrepreneur from a Karnataka village is providing remote employment to youth fr...