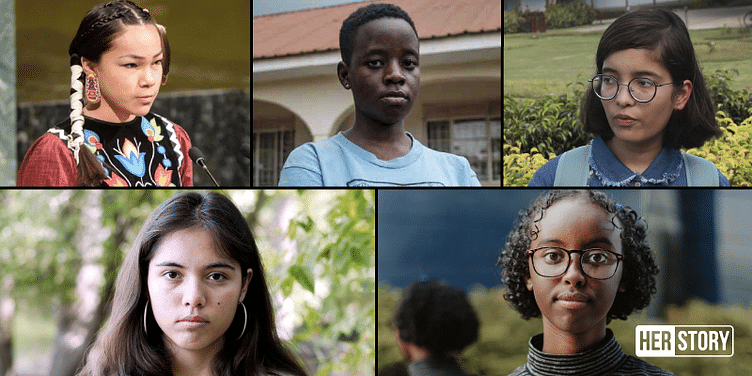 The climate change movement is in full force today, but the credit goes beyond just Greta Thunberg. Take a look at five other young activists fighting to change the system and save the planet.

Over the past year, young people around the world have united in the fight to change the system and combat climate change. Sixteen-year-old Swedish activist Greta Thunberg is arguably the most well-known figure in the climate action movement, but she is not alone.

Along with Greta is a host of young activists around the world, fighting for the planet, and demanding that people in positions of power stop chasing money and actually combat the burning issue.

Here are five young activists raising their voice against climate change, and urging the world to wake up to the growing crisis.

Fifteen-year-old Autumn Peltier, who belongs to the Wikwemikong First Nation on Manitoulin Island in Northern Ontario, Canada, has been advocating for clean water since she was eight. She began her activism by speaking at community events, and has today gained a presence at the forefront of the global climate movement.

In 2015, she attended the Children's Climate Conference in Sweden. In 2016, she confronted Canadian Prime Minister Justin Trudeau about the water crisis in Canada at the Assembly of First Nations' annual winter meeting. The next year, Autumn was nominated for the Children's International Peace Prize.

The young activist has since addressed the United Nations at various events and forums, stressing on the need to protect water and respect its sacredness. Earlier this year, she was also named the Chief Water Commissioner of the Anishinabek Nation, one of the oldest political organisations for 40 member First Nations across Ontario.

Fifteen-year-old Leah Namugerwa is spearheading the climate change movement in Uganda. She first held a protest for climate action in February this year, in the city of Kampala, and then planted 200 trees for her 15th birthday in August. She now has a group of other teen activists in the city supporting her despite facing criticism.

Leah is urging the government in Kampala to take action on environmental issues like the harmful effects of plastic bags, deforestation, droughts, and floods. She also launched a petition and a hashtag on twitter - #BanPlasticUG - to take her efforts forward.

In May this year, Leah spoke at the United Nations Habitat Assembly, addressing how innovation can help transform the lives of many across the world. She is also one of the ambassadors of Fridays for Future, which is led by Greta Thunberg.

Eleven-year-old Ridhima Pandey's interest in climate change began when she witnessed the 2013 Uttarakhand floods, which caused over 5,000 deaths and damaged more than 4,000 villages.

In 2017, when she was nine years old, Ridhima filed a lawsuit against the Indian government over its inaction towards climate action, through her legal guardians. She demanded the courts to order the government to come up with a budget to keep carbon emissions in check, and create a plan to help the country recover from the effects of climate change.

In September this year, Ridhima was part of the United Nations Climate Action Summit, along with 15 other young activists. Together, the children filed a legal complaint protesting the failure of governments regarding the climate issue.

Born in Mexico and raised with the beliefs of the Otomí-Toltect indigenous peoples, 17-year-old Xiye Bastida has grown up close to nature. Having experienced the effects of climate change first hand with fluctuating drought and heavy rainfall in her town, San Pedro Tultepec, she became determined to take action and protect the environment.

Xiye and her family moved to New York in 2015, and she soon started an environmental club at her school. She joined many groups working towards climate action, like the People's Climate Movement, the Sunrise Movement, and Extinction Rebellion, and asked their leaders to speak at her school.

In 2018, she joined the Fridays for Future strikes in New York. She has also spoken at the United Nations a few times, and helped organise a Global Climate Strike in September this year.

Through her activism, Xiye aims to highlight the voices of indigenous peoples and bring attention to their important role in the environmental movement.

Isra Hirsi, 16, has been advocating for environmental justice since she entered high school. As a young black Muslim woman living in the United States, Isra makes sure she keeps her community with her and is intersectional in her approach to activism.

She works to highlight the connection between the climate change movement and black lives, as black people are more likely to be affected by climate change because many lack access to basic facilities that can protect them from extreme weather conditions.

Isra, who is the daughter of Congresswoman Ilhan Omar, also co-founded the US Youth Climate Strike earlier this year, and has led a few strikes in the country.