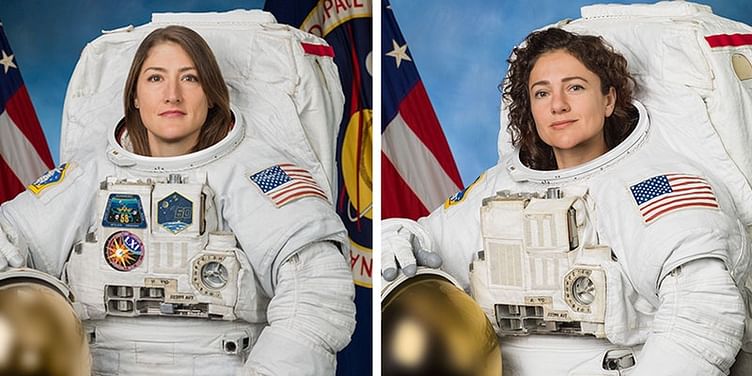 American astronauts Christina Koch and Jessica Meir will undertake repairs aboard the International Space Station for five-and-a half hours on Friday. This will be Koch's fourth spacewalk and Meir’s first.

American Astronauts Christina Koch and Jessica Meir will create history on Friday, October 18 when they will leave the International Space Station (ISS) for a spacewalk.

It will be the first all-female space walk ever in space history.

Both astronauts will replace a power unit on the ISS which failed last week. The space walk is expected to begin at 7:50 am EDT and last for five-and-a-half hours.

The first such all-female spacewalk was scheduled to take place in March earlier this year with Christina Koch and Anne McClaine. However, Anne was replaced by a male astronaut as NASA had only one medium-sized spacesuit on ISS. Following this fiasco, NASA received flak over sexism from various quarters.

Kathryn Sullivan was the first woman to spacewalk in 1984. Since 1998, there have been 220 spacewalks at the ISS, with only 15 women participating in it and they were all accompanied by men.

"In the past, women haven't always been at the table, and it's wonderful to be contributing to the human spaceflight programme at a time when all contributions are being accepted, when everyone has a role, and that can lead in turn to an increased chance for success," said Koch in a NASA TV video about this significant event.

This will be Koch’s fourth spacewalk and Meir’s maiden attempt. Koch is set to break Peggy Whitson's record for longest single spaceflight by a woman when she will complete 328 days in February 2020. Whitson was in space for a record 288 days from November 2016 to September 2017.

On Tuesday, NASA also revealed new spacesuits for the Artemis Mission in 2024 which will take the first woman on the moon. The new red, white and blue spacesuits, for the first time, will fit both women and men.

The spacesuits are designed to provide astronauts with greater flexibility, allowing them to bend over and pick up rocks, drive a rover and walk normally unlike the Apollo astronauts who had to bunny hop and often trip down on the surface of the moon. The spacesuits were designed to ensure that astronauts can sustain for longer periods of time on the surface of the moon without getting affected by radiation, moon dust and severe atmospheric conditions.

On Apollo 11 mission's 50th anniversary, a look at how the first moonwalk shaped NASA