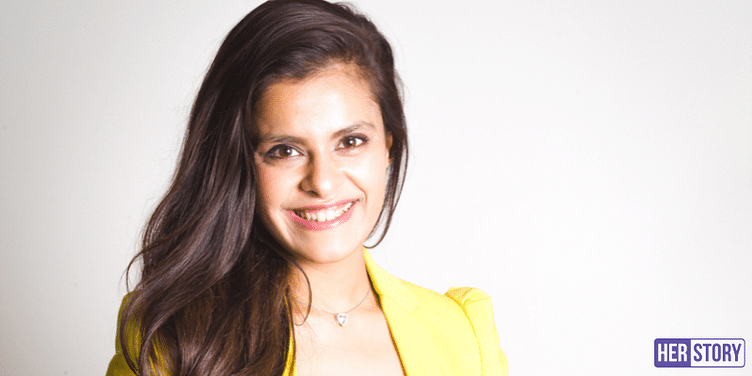 Mallika Bajaj says digital citizens living the 4.0 life need to ‘take control of our content’. This is why she has founded tech platforms like Little Yellow Beetle, and ApnaDr.

Mallika Bajaj has been working in the content space from the age of 16, first as a journalist with Hindustan Times, NewsX, BBC, and Sportscaster at ABC Australia, and then with her own startup, Little Yellow Beetle.

As a content provider, the 29-year-old believes the space has become stiffer, tougher, very competitive, and also predictable.

She wants to actively work towards creating kinder content; in the narrative we use, our tone and choice of words in order to create less hatred, and more empathy. In a world chasing happiness, she believes it will allow people to appreciate wholeness so that we are all kinder to ourselves in this rather anxious social media space.

“The grass is greener where you water it and so as long as we make conscious choices to put in our efforts to make our narrative and content more inclusive, helpful, and respectful, the consequences of new media will be kinder than harmful in the future,” she says.

“While it works brilliantly for the marketing and economic structure of this global world we live in, on a human level, we're making lives harder for each other. If we consciously work towards creating kinder content and a more meaningful narrative, we will be able to re-engineer our future,” she adds.

The young founder is of the opinion that as digital citizens living the 4.0 life, we will “all end up hurt and distraught if we don’t take control of our content”. She adds that technology, if used well and controlled, can be a boon to humanity, and it’s now time to reengineer.

By this time, she was already part of numerous projects, including launching the video segment to Hindustan Times, and Livemint at the age of 17. She also became the world’s youngest host for the BNP Davis Cup Tennis tournaments across Asia/Oceania at the age of 16, and went on to do so up until 2014.

Mallika was fortunate to be in the right place at the right time. It was 2013, and India was at the cusp of a digital uprising, with Prime Minister Narendra Modi emphasising on a digital India when he came into power in 2014. She established a 360-degree media solutions digital studio, Little Yellow Beetle Media Pvt Ltd, which she runs with her mother Abha and sister Pallavi.

“I had learned very early that most media houses were using the same processes for digital that they were for traditional media; that irked me. The medium is the message, and new media was using a new message that needed a new setup of storytellers. Academically, being equipped I wanted to fix this,” she says.

By the age of 25, Mallika had established two other tech platforms, ApnaDr, which she claims is India’s first tech platform providing critical rural healthcare, and Ballistic Learning Moodle Asia Partners, which deploys custom e-learning and HCM solutions based on open source technology.

Apart from being the Founder of Little Yellow Beetle and CMO for ApnaDr, she also represents her country on global media platforms such as the Financial Times, GCC Media Summit, IBC Amsterdam, W.I.N Rome, LA V3Con, and DigiMarcon on New Media, Innovation, Sustainability, and way forward.

“My most favourite hours at work, however, end up being the time spent with my family living on the streets in Gurugram (Delhi-NCR) or in rural India, where we aim to document their stories, give their dreams a voice and platform, share our creativity and co-create, and connect communities to co-exist,” she says.

For Little Yellow Beetle, the biggest clients are FICCI Cascade, Jamies Italian, Smooy, and real estate companies. For ApnaDr, she has partnered with Fortis Mohali, ASIAN Hospital, CMC, and many other rural healthcare units to support their #SwasthBharath initiative.

Mallika also has a string of accolades to her credit. These include being listed in the 100 Most Powerful Asia (2019), Women Super Achiever (Asia Summit 2019), 40 under 40 (BW), Entrepreneur of the Year, India (2019), Victorian Ambassador to State, Australia, and Obama Foundation Young Leader (2018).

As a digital native, Mallika believes that she is able to witness firsthand just how a handful of the privileged have access to technology and how we take his power and impact for granted.

“Having spent a large part of my time now with my not-so-privileged family members who live off the streets and in rural, unconnected parts of the world is what motivates me to get to work every day,” she says.

She strongly feels that technology is basic human need/right and everyone “should have access and understanding to avail the benefits of new media platforms, and stay connected to what they are drawn to”.

The biggest challenge with running a tech business, Mallika says, is the fact that you pack up work for the day, sleep, and when you return the world has grown manifold.

“Keeping up to date is crucial, and it's not so much a challenge perhaps, since we love what we do. The key is to surround yourself with people who are as passionate as you are about what you do. Hiring is a long-drawn process for us. There's no space for being complacent and that's what makes challenges exciting,” Mallika says.

Meet the woman entrepreneur who created a big buzz around Robin Sharma’s India tour and other s...