Momspresso is very close to my heart because it gives so many women a voice, says Sonia Gupta, spouse of Vishal Gupta, Co-Founder and CEO, Momspresso 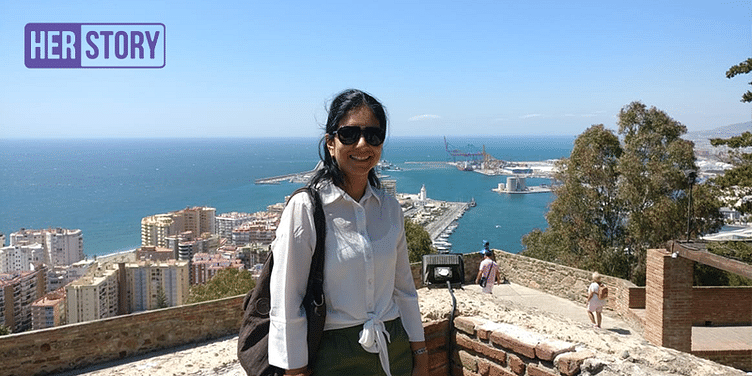 It’s always the venture and the entrepreneur who are in focus when we talk of a startup. Here we shine the spotlight on Sonia Gupta, wife of Vishal Gupta, Co-Founder, Momspresso.com, and her role in her husband’s entrepreneurial venture.

It’s always the venture and the entrepreneur who are in focus when we talk of a startup. The contribution of the spouse and children must also be highlighted and celebrated. Here we shine the spotlight on Sonia Gupta, wife of Vishal Gupta, Co-Founder, Momspresso.com, and her role in her husband’s entrepreneurial venture.

I meet Sonia Gupta, wife of Vishal Gupta (Co-Founder and CEO – Momspresso (2010, earlier mycity4kids) on a pleasant morning in November, one of the rare beautiful days in an otherwise smoggy Delhi.

Sonia is heading for work in a little while, and her energy and warmth assure me of a delightful conversation ahead.

"A banker on either side of a kids’ induced 'break," she smiles as she introduces herself. Sonia worked with Citibank and ICICI before taking a motherhood break. After a sabbatical of 10 years, she is now working with an NBFC in the fintech space.

“If today anyone asks me about the best places to work, I tell them to check out Momspresso. It is a matter of immense pride for me not just as a spouse but as a woman because 80 percent of the team across leadership, sales, research, editorial, business development at Momspresso are women. Not just that, Momspresso has given a lot of people a platform to express without the fear of judgement. It is a safe space for several women, Sonia says of her husband Vishal Gupta’s venture.

The beginning of a journey

“Momspresso happened in the avatar of mycity4kids in 2010. Vishal was heading marketing at Aviva, and they were launching some child plans. It was during this time that he felt very strongly about wanting to make a difference in the children's sector.  The demographics in India were favourable, and there wasn't much that had happened in that space, so there was a huge potential and a dormant opportunity. Also, the fact that we were young parents at that time. We used to struggle on what to do, where to take the kids, but never found anything structured. And then with Prashant (co-founder, Momspresso) resonating with the idea and coming on board as co-founder, just made it happen. “

Momspresso happened when Sonia was on a motherhood break from her job. The children were two and six when Vishal decided to quit his job and start the venture, even putting some of the personal savings too in the venture. As a spouse, was Sonia apprehensive?

"It came as a big shock to me, because we never had any such conversation at any point in time till then, though we had known each other for long. He had never expressed this want, and I think even Vishal didn’t know it exactly till it came like a calling,” she laughs.

“But there always was this streak in Vishal that one day at some point in time when he is successful in life, he would like to go back and do something which creates a difference,” she adds.

Rallying support from the family

“Vishal's dad was very supportive of the decision and encouraged him, but his mum had her apprehensions. My concern was not about stopping him on his pursuit; it was more from the financial front as I was also on a sabbatical. But nothing could stop Vishal. I remember him telling us,’ None of your basic lifestyles will suffer, nothing is going to change in the day to day life', and in retrospect hats off to him, he had the courage and conviction, and that's what made it happen. He was looking for something beyond a job that he could pursue for the rest of my life and am glad that he did,” Sonia says.

Change in avatar and image

What started as a discovery platform for children’s’ activities initially has shaped into a vibrant community and a go-to platform for mothers who share their experiences and thoughts without any fear of judgement.

Sonia explains, “The venture did quite well initially, but there were challenges, because a hook was needed to have users engaged. They would do focus groups with mums. We started with inviting mothers to review panels, share their thoughts about places, their stories and experiences, that garnered a lot of momentum. So, what started with inviting people to understand and figure out, became the rolling ball. Then at some point in time, videos were also introduced, which led to a new level of traction and engagement.”

Her involvement in the venture

Sonia played an important role in the shaping up of Momspresso. “I consumed the content and constantly gave my feedback and inputs. I don’t know how much of that finally got incorporated. (smiles) But I have been the beta tester of the app as well as all the new features on the platform. I have held focus groups at home. Apart from that and most importantly, I take full credit of bringing two people on the team who are today the pillars of Momspresso – Asif who is the third partner and heads technology and Parul who heads the Editorial to the Momspresso team.”

Were there times when the couple would have thought about Sonia joining the venture full time?

“Yes, we did (laughs). There were a few times when there was a big match of my profile with the requirements. Once when Vishal was looking at expanding business development with brands or when the team was envisioning a new vertical within digital marketing space. But I think, both of us shied away from it, though Vishal was very keen. I guess we have a very different style of working and I think it is better this way for marital bliss not to mix work."

How have the children taken up this journey and its challenges?

“When Vishal started, he used to work from home since there wasn’t any office space then. However, he could do so for barely a few weeks. The children were two and six then and seeing their father at home meant him being available for them all the time, and thus Vishal had to expedite looking for alternatives sooner than he had expected,” she says.

She continues. "Another interesting thing, which I can recollect is that when the company was growing, Vishal’s phone used to have the real-time Google Analytics running all the time which showed the traffic. Every evening, my elder one who was ten at that time used to sit and with immense curiosity ask Vishal, ‘papa how much is the traffic today, how much more, how much less than yesterday’”

“The kids identify with the venture and take pride in it. They understand that their father is doing something of his own, something which he wants to do. It is funny how our little one who is now 11 would remark while trying to seek his father’s time, ‘but you are boss of the company, why can’t you take out time.’”

Sonia says the entrepreneurial journey has not been without its apprehensions and fears. “We may not have similar bank balance and the assets could be more virtual, but there is an immense pride. Also, when I meet random people, and they know about Momspresso, and they speak about the quality of content, it is incredibly gratifying. Momspresso has provided that safe space to women where they support and inspire each other. Interestingly, I remember doing Vishal’s 40th, and a common compliment was that he dared to do something which most people wouldn't have done then."

Role of the spouse

As a spouse, the emotional support that you can give and the support system you can build around the entrepreneur is very crucial. The ups and downs will happen, but if the above two things are taken care of, you will be fine.

It can't just be the business idea of it; it has to be a passion which could be followed as a pursuit. But, as partners in crime, both of you have to take a collective decision to have that understanding that if the venture doesn't take off or achieve a particular milestone, then you need to step back and view it. Have patience but be realistic.”

Problems come and go but the journey of creating something of your own and helping your spouse in co-creating it is immensely gratifying, says Priyanka Gupta

He always wanted to do something different and I recognised that spark in him, says Madhuri Grover, spouse of BharatPe’s Ashneer Grover

From nutritious food to walks, petcare startup sploot wants to help you be the best dog parents