He always wanted to do something different and I recognised that spark in him, says Madhuri Grover, spouse of BharatPe’s Ashneer Grover

In our new four-part series, we focus on the spouses of entrepreneurs and their contribution to the building of startups. Here, we shine the spotlight on Madhuri Grover, spouse of BharatPe's Ashneer Grover

It’s always the venture and the entrepreneur who are in focus when we talk of a startup. The contribution of the spouse and children must also be highlighted and celebrated. Here we shine the spotlight on Madhuri Grover, spouse of Ashneer Grover, Co-Founder of BharatPe and her role in the company.

There is an interesting conversation Madhuri Grover recollects in the course of our interview to talk about her husband’s business and her contribution in the larger scheme of things.

“Our nine-year-old son is a big fan of Ronaldo and one day he came and asked me, "Mom, what do we call Spain in Spanish?"

"Okay, so one day I shall open EspaniaPe in Spain like Papa’s BharatPe in India."

BharatPe is a fintech company that serves offline retailers and businesses. A NIFT-Delhi graduate, Madhuri is a designer by profession. She has worked with big names like Satya Paul and Alok Industries, and also runs her furnishing business Mauve and Brown. Madhuri has also served reputed clients across the country, including Micromax Founder Rahul Sharma and his wife, actress Asin.

Recently, when BharatPe needed more hands, she joined the organisation to help with its internal functions. Today, Madhuri heads HR and Finance at BharatPe, and is using her business understanding and skills to bring order within the organisation.

What makes an entrepreneur take the plunge? The urge may always have been there, but perhaps the time wasn't right. The exposure to the startup ecosystem takes him a step closer to the dream lying dormant till now. Being a part of the ecosystem brings the right network and experience, and paves the path to founding his own. That's how I would sum up the journey of Ashneer Grover and founding of BharatPe as shared by his spouse Madhuri.

The couple met at Career Launcher around 13 years ago, and are now working together to build BharatPe as the next fintech revolution in the country.

Within ten months of launch, the company has established a network of 11 lakh merchants and facilitates over 15 million monthly UPI transactions.

Beginning of the journey

"Ashneer started his journey with Kotak Investment Banking in Mumbai, which was his first job. The campus placement from IIM-Ahmedabad landed him at Kotak where he was a part of various IPO deals before joining Amex in 2013. And though he enjoyed the MNC culture and spearheaded deals like MobiKwik yet, there was that urge to do more and something different. Those times were inspiring with the startup story growing stronger each day. Flipkart and Snapdeal were setting new examples. This perhaps paved the path for Ashneer to lead him to Grofers as a core team member in 2015. Though Ashneer left Grofers in a few years, that experience set the stage for what was to get built in the years to come."

Kotak, Amex, and then a startup - Grofers - how did she and the family take it?

"Our parents are from an academic background; my father-in-law is a Chartered Accountant and mother-in-law, a teacher. For them, Amex was a dream job, so they had their questions. At that time, not just family but even I was sceptical and not very convinced about him joining Grofers. But Ashneer was determined because the startup ecosystem was growing and there were lots of new ideas getting launched in various startups. He wanted to do something different more than what a corporate job expected him. We all understood that the path may not be smooth and may have a lot of risks. But since he was determined, there was no question of not supporting him.”

I ask her if this transition period was difficult for the family.

Being a part of the core team at Grofers gave Ashneer exposure to the startup ecosystem and an opportunity to experience about building a team. He met investors and made a vast network. But the decision to leave Grofers was a shock for the family. Parents had apprehensions, but I wasn’t worried. I knew it was just a matter of time. The only concern I had was Ashneer should get what he was looking for. It wasn't an easy phase since negotiations become challenging when one is looking for opportunities without something in hand.

During this time, a meeting with the BharatPe team at IIT-Delhi instantly clicked with him. He not just liked the idea but saw great potential in it. To concentrate on BharatPe full time meant giving up on the current job and no salary for an uncertain time.

In February this year, Madhuri formally joined BharatPe to help Ashneer with some of the functions. Working with the spouse, taking charge of a completely new setup as well as industry and being in a structure which she had no experience of came with plenty of challenges.

What triggered her to be part of BharatPe?

Madhuri shares, “During our daily walks at Siri Fort in the mornings, after dropping the kids to school, was a kind of download time where we used to discuss what's happening. During one of these conversations, Ashneer shared how they couldn't afford many employees for internal functions since the company was in the mid of a fundraise. I could sense that Ashneer and BharatPe needed help. Since I was running my business more on the model of a walk-in studio, which isn't a day-long job, I suggested that I could help. And when I joined, I could feel how the company needed someone senior who can take charge of various internal functions.”

“After the seed round happened and in between till series A happened, I slowly took charge of all these verticals – Finance control, banking HR, Purchase, vendor payouts. Things were challenging, but within a few days, I sorted everything,” she adds.

How easy or difficult is it to work with the spouse?

"When I joined Ashneer, there were a lot of challenges at the office which needed attention and resolution. We used to discuss work at home. And that many times led to conflicts which would have remained had I not spoken about them. I remember instances when I thought of reconsidering. But the mantra is to have a clear line of demarcation and not bring work to home at all. The time is crucial as the venture is in the growth phase. Ashneer’s schedules are erratic, and I feel that it is I who has to step up and take charge, and I have a lot of support of my in laws, which helps a lot,” she says.

How have the children taken to their parents working together?

"My children, especially the elder one, completely feels the pulse of it. There have been times when my children and I have pasted BharatPe stickers at the merchant outlets. It so happened that recently when at one such restaurant where my son had pasted it, he didn't see it next time we visited it. He not just observed it but also urged me to check on why it wasn't there. He had several questions – who would have taken it out and why. I guess in their own ways they also feel connected to BharatPe and are proud of it."

But what about her own interests, does she miss her venture, Mauve & Brown?

"Yes, that's my baby and my business. I would not like to leave that completely. I do miss it at times. This morning, I was thinking of hiring someone to take care of walk-ins. But at this point, I want to focus on building BharatPe. You know, at some point, I thought to work out both BharatPe and my studio, but it isn't easy to walk out from the office and take care of appointments. So it is at the back end now."

Also, what is the one key learning from the year she has spent at BharatPe and from Ashneer?

"If you want to grow, you need to build a good team; alone you cannot do. From just six to seven members in August/September last year, now there are 100 on the rolls and more than 500 sales employees and offices across 13 cities in India including Mumbai, Pune, Bengaluru, and Delhi. In a way, Ashneer constantly inspires me to aspire and work towards his dream of building and growing BharatPe to a big and respected startup in the years to come."

On the spouse’s trail: Are accompanying wives compromising on their careers when they move abro...

Problems come and go but the journey of creating something of your own and helping your spouse ... 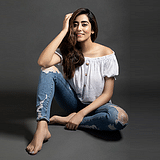 AR Rahman is extremely fun to work with and brings out the best in me, says singing sensation Jonita Gandhi