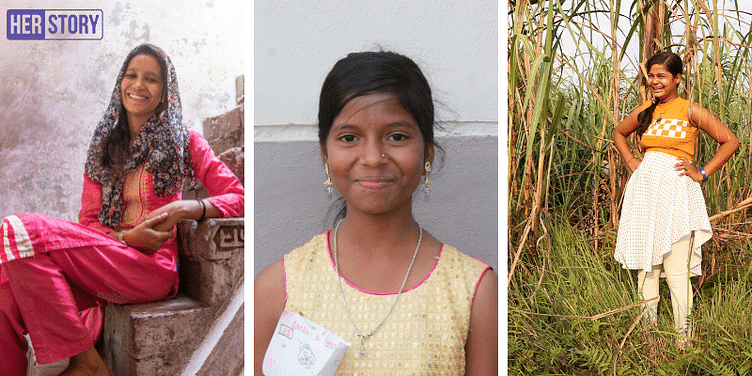 On National Girl Child Day, we profile three feisty girl icons. Supported by the Milaan Foundation, they are working to keep girls in their communities at school, stopping child marriage, and being the change they wish to see.

As we celebrate National Day of the Girl Child on January 24, it’s time to take stock of where girls stand in India today. In a land steeped in patriarchy and gender inequality, the girl child is often largely ignored and not part of the larger equation when it comes to empowerment.

According to CRY, the issue of girl rights and protection in India is a very serious concern. India is home to more than a third of the 10 million child brides in the world, with the highest number of girls forced into marriage below the age of 18.

According to Save the Children, child labour is common for “below poverty line” children (as high as 80 percent) and are forced to work in unorganised sectors. Also, Unesco data from 2012 reveals that majority of students who drop out of school before completing primary education are girl children.

Milaan, a non-profit organisation, was founded in 2007 with the aim to provide an equal and inclusive world, where every girl has the knowledge, skills, and social environment to pursue her dreams and explore her full potential.

Over the last 12 years, Milaan has worked with more than 35,000 children and young people, and advocated for safer and more inclusive spaces for them at various state and national platforms.

Its Girl Icon Programme educates and empowers adolescent girls between the ages of 12 and 18 years from low socio-economic communities in India through an experiential life skills-based education focused on 18 areas to build agency, fight for girls’ rights, and promote gender equality in communities.

Here are three girls from the Girl Icon programme who are changing lives.

Khushboo was fortunate than most girls at her age as she was enrolled in a private school when she was young. However, things changed very drastically when her father fell gravely ill. Faced with a financial crisis, Khushboo was pulled out of school.

“I studied in the anganwadi for two years. My mother later enrolled me in the government school from where I passed my Class 5,” Khushboo says. “I had to drop out of school again because there was no money to support my education.”

However, Khushboo was lucky to receive help from a local NGO Tareeq who supported her by paying half her school fees.

“People would question my actions. They tried to provoke my parents too,” she says.

However, Khushboo did not give up. As part of her Girl Icon social action project, Khushboo organised a street play with her peer group members in her community to raise awareness on the importance of girls’ education.

“I want to tell our society that if they give freedom to girls, girls can achieve anything.”

Khushboo is a third-year student at Vidyant PG College in Lucknow, and is pursuing a bachelor’s degree in commerce. She aspires to get her master’s in social work once she completes her bachelor’s degree.

“It is vital for girls to be educated to stand up for themselves and for their rights. My dream project is to educate adolescent girls, who have never been to school, to a level where they can join regular school in Class 5,” she says.

Her mother often places a lot of restrictions on her but her father continues to encourage her. When selected for the Girl Icon Programme, she had to leave her village for the residential training.

Her mother opposed the training, but her father said “koshish nahi karogi toh pata kaise chalega (if you don’t try, how will you know). That's all Simpi needed to hear and decided to make the best out of this opportunity to train herself as a role model and peer educator.

After she conducted her first peer meeting in the community, she was approached by a mother of two girls who were being forced into child marriage by their stepfather. Both sisters aged 14 and 16 were forced to marry a 32-year-old man due to the debt their stepfather was facing.

It was then Simpi gathered all her courage and decided to help them, although she knew that it wouldn’t be easy. She, along with her peer group, took charge of the situation and decided to resolve this matter no matter what. But even after a persuasive dialogue, the father was not convinced to stop the marriage. Simpi then decided to seek help from the police who helped her. The two girls now live with their mother separately. One has also joined her peer group and works for the rights of girls like herself, who are victims of child marriage.

Fourteen-year-old Sakkuabi hails from a low-income community from the village Gammangatti in Hubbali, Karnataka. Her parents are migrant labourers. She has two younger sisters who are studying with her in the same school. A year back she was in the Gammangatti village with her parents, and her parents migrated to another village because of lack of income.

Sakkubai said, “When I joined Girl Icon Fellowship programme, I was very keen on my goals, and I was always talking about the problems faced by girls in my community. I know I am in a situation where I can’t buy a single dress in a year. I and my sister patch our clothes several times and reuse them, but that doesn’t bother me because I know girls in my village who are struggling to eat three meals in a day. In front of their problems, I am blessed. My parents have permitted me to attend school along with my two younger sisters. I want to become a role model for girls who are simply blaming the situation and fate for their sufferings,” she says.

Sakkubai has been working hard with her schoolteachers to bring girls from her community, who had dropped out of school because of financial constraints, back to school. She has helped five girls go back to school, and seven more girls are soon likely to rejoin school.

“In my group, most girls are living in poverty; their situation is much worse than mine. We all just want to get educated to reach our goals and earn a respectful life. With each other’s support, we help other girls who are in adverse situations like child marriage, child labour, school dropout and so on. I know my dream is not big but it is not small either,” Sakkubai says.

Katrina Kaif finds purpose in educating the girl child; takes on a school in Madurai