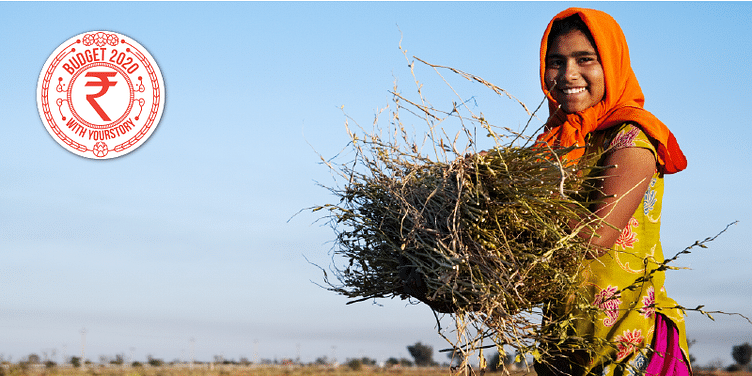 India’s first full-time woman Finance Minister Nirmala Sitharaman in her second Budget announced assistance to women's self-help groups in villages, focus on nutrition and a task force to submit recommendations on the marriageable age of women.

Quite early in her Budget speech, Sitharaman likened the women of villages who were responsible for distributing seeds for sowing as daanyalakshmi, and emphasised on their important role in the agricultural sector of the country.

To this end, she announced that all women self-help groups (SHGs) will act as daanyalakshmis in villages assisted by Mudra schemes and NABARD.

She also quoted from famous woman poet Avvaiyar’s Aathichudi, which loosely translated into, “First tend to your land, remove weeds, take care of it, and then expect some crop.”

She began her section on women, children, and social welfare by highlighting the tremendous impact made by the Prime Minister’s Beti Bachao, Beti Padhao programme. She announced that the programme has yielded incredible results, with the gross enrolment ratio of girls across all levels of now education higher than boys.

Launched on January 22, 2015, in Panipat, Haryana, it aims to generate awareness and also improve the efficiency of welfare services for the girl child. The initial aim of the campaign was to address the declining Child Sex Ratio (CSR) but has come to include gender-biased sex-selective eliminations, and propagating education, survival, and protection of the girl child.

Nirmala Sitharaman says that women are a priority for the government, especially pregnant women and lactating women. The Finance Minister also shed light on the Poshan Abhiyaan that aims to raise the nutritional levels of women and children in the country. Under the scheme, the FM stated that six lakh anganwadi workers will be equipped with smartphones to upload the nutritional value of more than 10 crore households.

She also said while the marriageable age of women was raised from 15 to 18 in 1978, a special task force will be constituted to present its recommendations for limitations relating to their marriageable age.

The Budget recommended a provision of Rs 35,500 crore for the nutritional programme in 2021, while a total of Rs 28,600 crore have been allocated for women-specific schemes in the Budget for 20-21.

It must be noted that the Economic Survey released on Saturday found that 60 percent of women in India in the productive age bracket of 15-59 years are engaged in full-time housework. Also, the female labour force participation reduced to 25.3 percent in 2017-18. It was 33.1 percent in 2011-12.

In light of these disturbing numbers, the announcement of the specific programmes for women, as announced by the Finance Minister in the Budget, will be keenly awaited.

Last year, Sitharaman called women, 'naari tu narayani'. Let's hope with this Rs 28,600 crore allocation, women in the country will be empowered in whatever they choose to do.

Mothers are burnt out. Here’s how organisations can help.