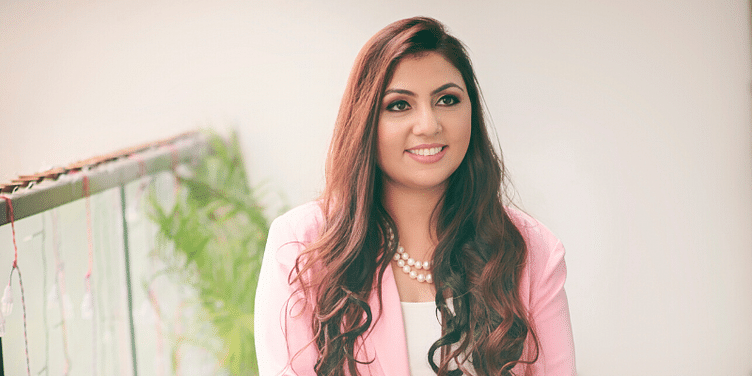 Entrepreneur Archana Khosla Burman, Co-founder of Mumbai-based Vertices Partners, is an inspiration to budding lawyers and women entrepreneurs in India.

Archana Khosla Burman calls herself a true Indian. Raised as an Army child, she lived in different parts of India and each one became home for her. Born in Wellington, a hill station in Tamil Nadu, she has lived in Assam, Gujarat, Bombay, Delhi, and Meerut, among other places.

After completing her schooling, Archana pursued her higher studies in law at the Army Institute of Law in Mohali.

Recalling her initial days of working in Delhi, she says, “I began my career in litigation law. I worked with the additional advocate of Punjab who had his office next to the Supreme Court of India. After three years, I felt that litigation as a profession takes time.”

She then switched to corporate law. Archana says working at Economic Law Practices in Mumbai, one of the largest corporate law firms in the country, gave her good exposure in the field where she honed her skills in venture capital and private equity.

Archana was all too familiar that business activities needed a lot of legal work at different stages. Any move in striking new deals, partnerships, and buying new properties for expansion must first ensure proper legal processes as a minor challenge could backfire anytime.

After nearly nine years of practising as a corporate lawyer, Archana “decided to get entrepreneurial” and started Vertices Partners in 2016, along with Vinayak Burman and Amit Vyas. The trio has tapped right into India’s legal services market that was valued at $1.3 billion in 2017.

“We were already working 22 hours a day, passionately. So, we just thought why not do it for ourselves,” she adds. Starting as a three-member team from a 400 sq ft office in Mumbai Vertices Partners has grown into a 40-member team.

Specialising in venture capital and merger and acquisition, Archana explains how the startup works. “In any organisation, there will be a number of day-to-day compliance processes including contracts and vendor management. If the client requires us to take care of the entire package for them, then we work on a retainership contract - providing service for a certain number of hours every month. Alternatively, we handle project-based work as well.” Services are charged based on the level of complexity involved in a deal and the number of working hours.

A lawyer for more than a decade, Archana says, entrepreneurship is a different ball game altogether. The focus now goes beyond legal practices to taking care of important aspects of business like cash flow management.

It’s been a joyful ride so far, says singer Shilpa Rao as she blazes new trails in music

Rightfully claiming her place in the male-dominated field of law, Archana says she has experienced subtle gender biases along the way.

Experience has taught us to battle these biases with confidence and hard work. “Sometimes when you go into a negotiation room which is filled with men, people initially tend to get dismissive until you speak up. I speak to a lot of women entrepreneurs, friends, and clients who have also faced biases. The more I talk to them I realise the important thing is to be ourselves,” she says.

She also mentors young entrepreneurs and points out that most lack confidence even though they show huge potential.

Archana advises women not to go too much by what others think of them, and gender tags. “Just go with the flow. You and I are here for work and how to get it done with hard work and diligence. When you show them you are focused, the mindset of the other person also changes.”

Working across diverse sectors including inter-alia financial services, consumer products, healthcare, media and entertainment, manufacturing, education, and pharmaceuticals, Archana is an inspiration to aspiring lawyers in the country.

Internationally, she was recognised by Thomson Reuters in its list of 40 Under 40 in Asia Legal Business as well as the 40 under 40 Rising Star by Legal Era. Archana was also named as the Entrepreneur of the Year in 2019 by the Indian Women Convention.

She switches between full-time roles of entrepreneur and mother of a 22-month-old baby son with ease, and finds solace in music - playing the keyboard and guitar - to unwind after a long day.