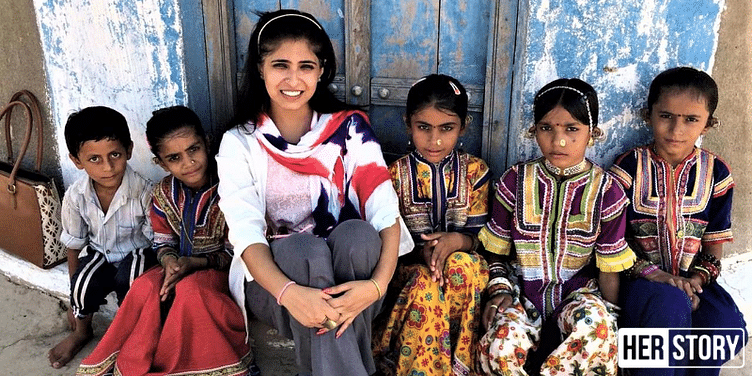 Raashi Anand, along with her NGO Lakshyam, stepped in to provide food and rations to those in need. She also helped women make masks and earn an income during the pandemic.

The global health crisis — COVID-19 pandemic — has brought the world to its knees, disrupted life as we know it, invoked a ‘new normal,’ affected economies, healthcare systems, and devastated lives for many.

It has also turned into a humanitarian crisis affecting millions of people who were living in the lowest rungs of society. In India, we saw the pandemic forcing hundreds and thousands of migrants to walk back to their villages and hometowns. It also led to hunger, poverty, non-availability of rations, unemployment, and more.

Seeing the suffering of several lakhs of people, civil societies, NGOs, corporates, and celebrities, among many others, came forward to help those in dire need of food and other resources.

One such individual was Raashi Anand, a social entrepreneur, and the founder of NGO Lakshyam.

“After the lockdown,  in a few days, we started getting calls from our communities for food. We were prepared, and we arranged for dry ration for all of them. However,  there was a huge increase in the number of calls from NGOs and individuals calling for food, women reporting domestic violence, and animal lovers regarding animals going hungry, and more,” Raashi shares, describing the urgent cry for help from various quarters.

Focussing on the most basic and urgent needs, such as food and rations,  Lakshyam managed to arrange food for communities around the Delhi-NCR region, seven more nearby targeted locations, and several villages in seven other states in the country.

Raashi’s NGO Lakshyam works in the areas of women empowerment through skill development, as well as education for children. It has been working in slum dwellings and communities that house daily wage earners, who have been the most affected by the pandemic and the subsequent lockdowns.

“We have been working in areas where people are shoe polishers, rag pickers, car cleaners, vegetable vendors, etc., who are daily wage earners and they spend their daily income, which is about Rs 100 to Rs 300, on an average family size of five or six,” Raashi tells HerStory.

With the lockdown coming into effect, men and women in these communities either lost their daily livelihoods or suffered severe losses.

Raashi says that about 20 days into the lockdown, she received calls from women who worked with the NGO in its skilling programme. They called to ask for work as their husbands were not earning anymore. Despite receiving food and rations from the NGO, these women still had to meet other needs such as milk and medicines for their children.

Lakshyam has been working with these women and helping them handcraft cloth bags to earn a living. It has trained more than 8,000 women to date in making cloth bags and producing phenyl out of cow urine to sell in the market.

Amidst the pandemic, as the need for masks surged in the market, it helped these women make washable cotton masks. For every mask and bag they made, the NGO paid them Rs 5-8 apiece, subsequently helping them earn a living during the lockdowns.

In fact, the NGO set up a dedicated phone line to listen to domestic violence victims.

“Looking at the number of calls we got from domestic violence victims, we initially listened to them. Women were crying, they were depressed, or out of homes. We listened to them and then diverted them to a dedicated counsellor to help them out. Later on, we shared the relevant NGOs and the National Commission for Women’s helpline number, so that they could find a permanent solution,” Raashi adds.

The World Bank, in its draft ‘India Development Update,’ has warned that several households are “likely to slip back into poverty due to income and job losses triggered by COVID-19.”

It is understood that poverty and access to resources and jobs in the post-COVID world will affect the underprivileged people the most.

The ‘new normal’ has already affected children from low-income families, who have lost track of education as schools are closed, and they are not able to move on to online education due to lack of resources.

“Once things are normal, we will have a tough time to bring them back to studies,” says Raashi.

Once the NGO has rehabilitated children from begging, rag picking, or other hazardous employment, it admits them in the nearest government schools.

Raashi says that during the pandemic, these government schools have pivoted to online learning, but they are inadequate. Even though schools have moved to the digital space, there are many children for whom technology is a far fetched option.

She adds that the four Ghaziabad schools, with a strength of more than 1,000 children, that Lakshyam works with are facing these issues. She believes that digitisation for all is an urgent need that needs to be addressed.

Another need to be addressed, she says, is unemployment. Dire economic situations have forced some children to go back to child labour. Faced with unemployment for both men and women, financial insecurity has also risen.

Raashi says that the government’s economic stimulus packages, availability of collateral free-loans, and more schemes must be implemented properly to ensure that it reaches the needy and benefit the right people.

To be able to further her own abilities to help people in need, Raashi is soon going to launch two social enterprises to fund the work of NGO Lakshyam, rather than be dependent on fundraising and charity events.