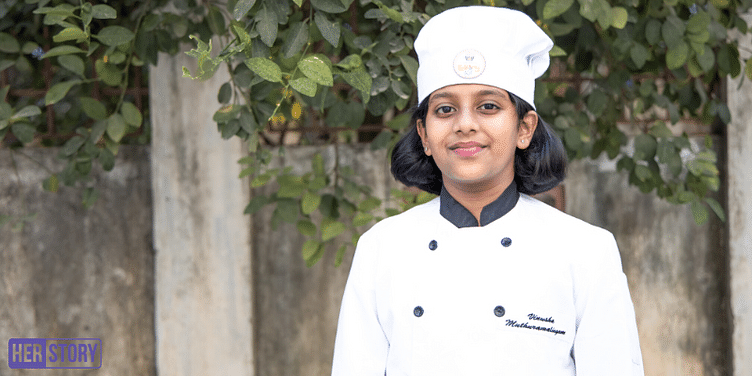 Vinusha MK, a Class 5 student from Chennai, is the owner of Four Seasons Pastry, which offers cupcakes that are inspired by the four seasons.

It’s not often you get a LinkedIn invite from a 10-year-old pastry chef and entrepreneur.

But with entrepreneurs getting younger by the day, it comes as no surprise.

A closer look at Vinusha MK’s LinkedIn profile reveals age is no bar for ambition. She has her own registered brand, Four Seasons Pastry, and the idea for a portable baking kit to her credit.

Her Facebook page reveals a number of FB Lives conducted recently, including one with Amul India that garnered over four lakh-plus views. She also featured on an FB live on actor Kamal Haasan’s FB page, Miam.

There’s something about this child entrepreneur that’s intriguing and merits a phone call to know more about her story.

On the call, Vinusha comes across as enthusiastic, confident, and raring to go. There’s no element of the “childishness” you’d associate with a 10-year-old. There’s no hesitation in her voice either, just a lot of passion for what she’s doing.

The story began, Vinusha tells me, when she was nine years old. The student of Amrita Vidyalayam in Chennai wanted to bake a cake for her mother on her birthday. With the help of YouTube videos, and a friend, she managed to bake one and surprise her mother. That’s when she realised she had a knack and wanted to take it further.

Her parents were excited about her interest too.

“They took me to many entrepreneur sessions and told me stories of entrepreneurs. The thought of creating my own brand - with the help of my parents - took root in my mind, and that’s how Four Seasons Pastry was born,” she says.

She explains, “While the base for the Four Seasons cupcakes remains the same, the cream and frosting are very different. They represent the four seasons. For winter, it comes with a snowflake made out of fondant, orange reflects summer, flowers herald spring, and scattered orange leaves depict autumn.”

Launched in August 2019 from her own kitchen and made during her spare time, Vinusha has so far sold over 600 cupcakes.

In between, she also managed an internship stint at a five-star hotel and café. That’s not all.

In January this year, she launched a baking kit complete with ingredients, a note about the science behind it, recipes, ingredients and more. Launched at the Young Entrepreneurs Academy (YEA!) exhibition in Mumbai and priced at Rs 450, she sold 10 kits before COVID-19 and the lockdown happened.

Vinusha also tried her hand at two cake varieties – vanilla and black forest - in February and has sold 15 cakes so far. During this period spent at home, she also launched blondies, chicken/vegetarian sandwiches, and homemade chocolates.

Most of the traction for the brand that translated into sales came from social media and participation in various exhibitions (before the lockdown).

“TiE also helped me by introducing me to a lot of entrepreneurs who I took advice from,” she says.

“While my parents are behind me in this venture 100 percent, I have three mentors guiding me every step of the way. These include Suresh Chinnaswamy, founder of Dosa Kall; Lakshmi Reddy, a renowned pastry chef; and Geethakrishnan sir, who has more than 40 years of experience in the pastry field,” she adds.

In between her studies and baking, she also gets time to learn the intricacies of pastry baking from Chef Rumana Jaseel, and learning traditional Indian recipes like Butter Chicken, Gobi Masala, and Paneer Butter Masala from her mother.

“If there is a true inspiration for my interest in cooking and taking this forward, it’s my mother, Kavitha,” she says.

When I ask her whether her entrepreneurial ambitions clash with academics, she is almost vociferous when she says, “I’m very good at studies. I make it a point to finish my homework quickly and go into the kitchen. I have no problem on this front.”

Once she grows up, she wants to study at “any famous culinary institute either in France or Switzerland”.

Her ambitions for Four Seasons Pastry are sky high. “I want it to be in the No. 1 brand in desserts,” she says. And that’s not all. She also wants to set up a baking institute for those who cannot afford to study abroad.

With an initial investment from her parents, Vinusha is already making profits from her business.

“After the pandemic ends, I am looking forward to offering healthy versions of cupcakes. I’m also waiting to launch my ecommerce website, fourseasonspastry.com, which will feature all my creations,” says the little chef.