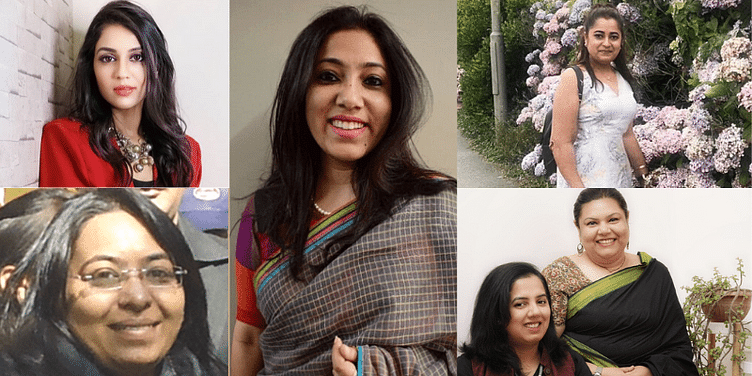 These women entrepreneurs are helping weavers and artisans across India preserve ancient and traditional handicrafts and also earn a livelihood.

The real India residing in villages is home to a host of traditional handicrafts, many of which are dying, because of a lack of interest in their revival. Unique Suf embroidery, ikat, kani, bhujodi, are some examples of weaving techniques, which originated more than thousands of years ago.

Unfortunately, most artisans behind the handicrafts – that have become India’s signature in the global market – are languishing and surviving on meagre wages.

This is mainly due to the long supply chain between them and the market in India or outside. There are many organisations and individuals committed to preserving the ancient artforms and make it relevant to modern consumers and better the living standards of the artisans and weavers.

HerStory presents five women entrepreneurs who are doing big favours to these handicraft communities across India.

Powerful stories can change a person’s course of life as it did for Avipsha Thakur, founder of Bunavat, a for-profit social enterprise that makes contemporary sarees through traditional, sustainable weaves that needed to be preserved.

Based in Gurugram, the journey of her enterprise really began in January 2018 when she visited Ajrakhpur, a village in the Rann of Kutch out of her love for sarees.

However, it was the life and family story of an artisan where the labourers of hand printing sarees was lowly paid. This was followed by another trip to three more clusters of weavers in West Bengal where the artisans had poor living conditions due to long supply chain between them and the end customers.

Therefore, the 33-year-old decided to take the entrepreneurial plunge to help provide a steady flow of income for the artisans by doing away with middlemen in the supply chain.

True to her resolve, more than 950 weavers across 30 weaving clusters, spread over 11 Indian states can sell directly on the Bunavat’s ecommerce platform. The handmade and handwoven sarees cater to women in metros, Tier I, and Tier II cities of India.

Prior to this, Avipsha who has an MBA in marketing and BTech in electronics and communication, worked corporate jobs at Hewlett-Packard and Honeywell. In 2017, the entrepreneur worked with underprivileged adolescent girls at a non-profit called Roshni.

Two mothers Shilpi Sharma and Satya Nagarajan’s difficulty in finding locally made, high quality, and affordable clothes for their children compelled them to become entrepreneurs and address the gap.

The duo founded the Indie Project Store (IPS) in 2016 that sells locally made and environmentally conscious clothes which also helps independent artisans, weavers, and small businesses.

The co-founders claim to use 100 percent pure cotton and source traditional Indian fabrics like ikat, Kalamkari, mangalagiri, khadi, mulmul, handloom, and hand block prints, sourced from vendors and local suppliers, who work directly with the artisans and weaver communities.

The business that grew from social media sites like ﻿Facebook﻿and Instagram now clocks an impressive revenue of more than Rs 38 lakh and has witnessed a 15 percent year-on-year growth since inception.

Venturing into the urban India market initially, the startup currently caters to customers from Tier-II and III cities as well as NRIs in the US, Singapore, and the Middle East.

Surbhi Agarwal left behind her family business of running a specialty hospital in Jodhpur and followed her passion towards art and hopes to help underprivileged women of India.

As a solution to both, her startup, The Art Exotica works with artisans in rural areas of Rajasthan to manufacture home décor products, showcasing unique Indian handicrafts and textiles and exports them internationally.

The entrepreneur had learnt about the struggles that traditional weavers and artisans - mostly women - face while organising rural medical camps in the villages.

Most exporters were leveraging the skills and hard work of weavers in exchange for meagre wage and keep two-thirds of the profit from sale in the foreign market.

Surbhi then took up the responsibility to impart financial education and helped them produce sustainable, eco-friendly products, recycled, organic, and ethical products. Currently working with weavers in western Rajasthan and Bhuj in Gujarat, she hopes to help weavers in North-Eastern states as well.

Started with an initial investment of Rs 27,000 from her garage, The Art Exotica operates on a B2B model and exports to countries like Germany, France, The Netherlands, Sweden and Finland, New Zealand, Australia, and Canada. The entrepreneur has also helped one of the artisans to hold an exhibition at the Santa Fe Art Gallery in New Mexico.

This woman entrepreneur started her handicrafts export business from her garage with just Rs 27,000

Vanshika Gupta came across Suf, an intricate embroidery form practiced by women artisans of Kutch region in Gujurat during her final year of her bachelor’s degree in fashion design from Pearl Academy in Delhi.

The artform, involving a painstaking process was being preserved by only few NGOs and the skills of women artisans behind it went unnoticed.

Thus, in 2019, Vanishka made it her mission to popularise the artform and provide women artisans a platform by starting Label_Vanshika.

She introduced her first collection of Suf embroidery, Navajo by Women, as part of her college project by working with 12 to 15 women from the Sumrasar village in Kutch. It was also displayed at the ﻿Amazon﻿Fashion Week.

The entrepreneur had been toying with the idea of making suf embroidered masks before COVID-19 struck which is now well into the market, priced between Rs 200 and Rs 1,000. The launch of the label’s first collection, planned for August, is now scheduled to be launched in early 2021.

Growing up in Delhi, Sugandha Kedia used to be fascinated by traditional Indian weavers and their products as a child. More than a decade later when she found herself with plenty of time after marriage, the former Zoom and NDTV employee decided to engage with her childhood interest and started visiting weaver’s clusters in Kashmir a year-and-a-half before Dusala Kashmir was launched in January 2020.

Today, she works with around 50 weavers across Kashmir and sells handwoven and fabric shawls and stoles, priced between Rs 2,500 and Rs 10 lakh. Her fashion and lifestyle Instagram page has also been a key marketing tool for the six-month-old brand.

Worn by Bollywood celebrities like Shilpa Shetty, Dia Mirza, and Karisma Kapoor, and Europe-based award-winning fashion blogger Masoom Minawala Mehta, the brand also caters to clients from the UK, the US, and Australia.