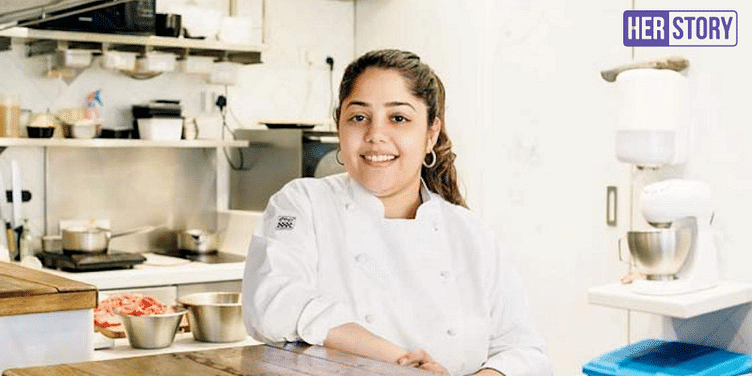 Chef and chocolatier Sanjana Patel is the Co-founder of La Folie, a gourmet patisserie in Mumbai. She specialises in unique and exotic desserts, and bean-to-bar chocolates from across the world.

Do you know what cacao beans smell like when they are being fermented? Wonder if you could taste them while in that state?

Chef and chocolatier Sanjana Patel, Co-founder of ﻿La Folie﻿, a gourmet patisserie and bean-to-bar-chocolate manufacturer, brings you the experience of cacao beans in fermentation.

"When cacao is fermenting, it smells and tastes like lychee, custard apple, and more. So I created the same flavours with the cacao juices and incorporated it with lychee, floral honey, and lavender honey to create those same flavours. If you had to smell a box of fermented cacaos, this is what you would smell. I created some smoke air as well for people to actually experience that they are in a farm,” says avant-garde chef and chocolatier Sanjana, who has earlier trained with Michelin star chefs and restaurants in France.

This exotic dessert is just one in many unique creations by Sanjana, who opened La Folie in 2014 in Mumbai. Her other sumptuous creations include a chocolate bar called Silk Route, which has flavours of pistachio, cardamoms, nutmeg, with Indian rose petals; another chocolate bar, that is infused with green mango or kairi and naga chilli. She also makes a dessert called Infinite Caramel, which brings out seven textures of caramel, smoked caramel with gunpowder tea, and Oishi, a Japanese togarashi spiced with passion fruit caramel, along with bonbons, ganaches, classic french desserts, tea cakes, and more.

Sanjana's love for edible arts and chocolate began as a young 14-year-old when she started helping her grandmother, a baker in her kitchen.

Her love for chocolate led her to Europe, where she studied food science and specialised in confectionery and chocolate technology in countries like England and France. She honed her pastry skills at reputed institutions like École Grégoire Ferrandi in Paris and Le Cordon Bleu in London.

Post her successful stints at famed restaurants, including Hotel Le Meurice and Hotel Plaza Athénée in the Dorchester Collection under chefs like Christophe Michalak and Chef Alain Ducasse, Sanjana came back to India and set up La Folie, along with her husband Parthesh Patel.

The duo began by exhibiting her desserts at various exhibitions, and in 2014, they set up their first boutique café in Kala Ghoda, Mumbai. Six years later, La Folie has another boutique café in Bandra and a cafe-cum-central kitchen and factory in Mahalakshmi in the city.

The couple pooled in their savings, as well as received some financial help from their family, and set up the first store with a capital of Rs 1.5 crore. As business operations increased, they took out loans and bank overdrafts to fund orders and buy capital machinery. Their hardships and hard work bore ‘sweet’ fruits when the establishment made revenue worth over Rs 6 crore last year alone.

Sanjana says there were multiple challenges that they had to face in reaching this level.

“Not facing challenges will never make you a good entrepreneur,” she adds.

La Folie encountered rough waters as soon as it entered the market. It was offering authentic French desserts and introducing unique and exotic combinations with lesser-known ingredients like Yuzu, a Japanese lemon, and more to elevate normal desserts. Being a niche patisserie and placed in prime real estate areas, their price points were also high.

"I introduced concepts of unique fruit pairings and concoctions, and fruit and chocolate paired together in desserts. Those things were very new, and this was about six years ago when people were not subjected to these kinds of tastes. So, a lot of education was required to help people understand what we were doing,” the co-founder explains.

However, over the years, she feels that with experimental cuisines expanding in India, people are now more open to trying out new flavours and foods.

In creating authentic desserts, she often requires international ingredients like French butter. However, the supply of such ingredients was not readily available in India at that time, as compared to now. The supply shortage of such raw materials forced them to not make some of their desserts oftentimes.

Two years ago, Sanjana decided to change La Folie’s business philosophy. She decided to adopt a sustainable approach to her thinking and dessert making that encourages responsible and slow consumption. Making edibles that are “good for the body, consumer, as well as planet,” became a pivotal point in the business.

The patisserie shifted to the ethical sourcing of ingredients like cacao from cooperatives that worked with indigenous people in India, South and North America, and Africa, employed fair trade practices, switched from refined to unrefined, clean sugar, and used recyclable packaging and other practices. Moving forward, La Folie hopes to completely switch to organic products.

“For us, making products in a responsible, ethical manner is a lot more important than just making a product that you can indulge in,” she adds.

Sanjana feels that the paradigm shift in philosophy will help La Folie open to new markets. Even though it will be a challenge, she admits.

One incident that shaped La Folie’s business strategy and philosophy is the Kamala Mills fire in 2017. The fire ravaged a commercial complex in Lower Parel on the night of December 29. It resulted in 14 casualties and several injuries. The fire also burned down La Folie’s store in the complex and resulted in the complete closure of that branch.

"To be honest, it is the same as the pandemic. It was not in our hands,” says Sanjana.

She adds that it was upsetting at first as the operations closed down within eight months of the store’s opening. The lesson she learned was to take it in the stride and move on, and come up with a new strategy to operate and recover the losses.

This incident led the duo to focus its energies and resources on creating a digital retail branch across India. It allowed them to deliver their longer-shelf life products across the country, and expand their product offerings to a wider audience without investing in offline stores.

Even during the pandemic, the co-founder has been working around the clock to keep La Folie running. It shut shop for the first 10 days of the lockdown, after which the boutiques opened for deliveries only. Even though most of her employees have returned to their hometowns, she has continued to keep the boutique open and provided accommodation on the premises for some employees and transportation for some more.

Sanjana claims that the patisserie is doing about 65-70 percent of the pre-pandemic business. However, it has forced her to cut the menu by at least half.

Sanjana feels that La Folie’s customer relationships and management have kept them afloat in these turbulent times.

[Women in Tech] Diversity and inclusiveness are important to female talent: Marjet Andriesse of Red Hat