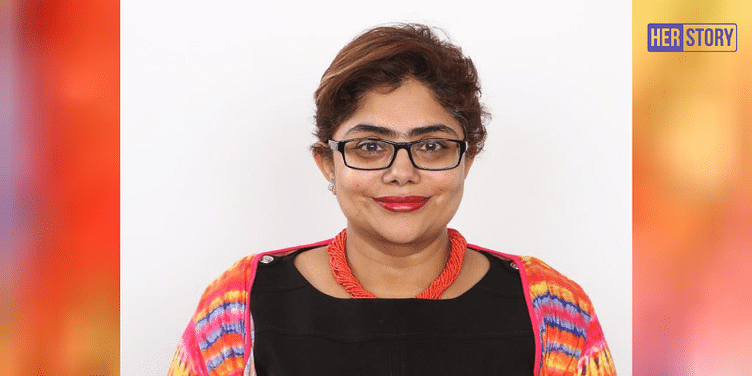 Leaving behind a successful corporate career spanning 25 years, Hima Bindu found solace in art. Today, she sells her paintings made using coffee waste, at prices between 50 and Rs 50,000.

Former First Lady of the US, Eleanor Roosevelt once said, “A woman is like a tea bag – you can’t tell how strong she is until you put her in hot water.”

Fifty-year-old Hima Bindu’s life exemplifies this quote very well – hers is also a story of survival against the odds. When she was born, her parents grandparents were disappointed that she was a girl. Her entreaties to continue her studies after completing her Bachelor’s in Computer Science from St Francis College, Hyderabad fell on deaf ears.

Hima’s parents married her off at 22 to a man in the US, 10 years older, unsympathetic to her dreams and with a penchant for domestic violence.

Nine months into the marriage, after surviving three attempts by her in-laws to kill her, Hima returned home to India to her parents, shattered and not knowing what the future held.

She admits that the experience left her with a lot of scars. “Some heal and some are still there,” she tells HerStory in a conversation about her life and career.

Determined to move on, Hima enrolled for a diploma in Computer Applications under the affiliation of Department of Electronics, Government of India, and also pursued an MBA from Osmania University, Telangana.

She secured a job as an associate in a Germany-based MNC and worked her way up to become the global head of learning and development. In her corporate career spanning 25 years at two MNCs, Hima has bagged prestigious Service Excellence Awards.

Hima admits to being a workaholic, the kind society does not think too kindly of. "When a woman achieves success, people resort to character assassination. Some said I must have slept with men in authority to reach my position,” she recalls, sobbing.

She tried to be friends with her colleagues but that didn’t work out too.

“With the company privilege cards, my colleagues and I used to go pub hopping and everybody would tell me I was the life of the party. But it was all pretence and I was left out of gatherings. Fortunately or unfortunately, my boss had to crack an urgent sales deal one day and called me at the pub where all my colleagues were partying,” she shares.

One of the few Holocaust survival stories with a happy ending: Eva Erben’s story

From the corporate world to art

She switched her privilege card option at the company and began participating in CSR activities and taught HIV-AIDS patients and visually challenged children to make candles and paper bags. At one summer camp, she got the chance to pick up her childhood passion for painting, right where she left off.

When the pungent smell of kerosene and linseed oil in the paint materials caused breathing problems, Hima started painting with decoction from coffee waste and since then, there has been no turning back.

In 2017, her health took a hit and her neurosurgeon warned that overexertion had aged her dominant hands and feet more than her body. That is when she quit corporate life for good and devoted her time to painting. With the help of mentors like Sunalini Menon, Asia’s first female coffee taster, her skills started gaining visibility.

The Coffee Board of India also requested her to represent India’s art and culture through her coffee paintings at the 2020 World Coffee Conference – which has been delayed due to COVID-19 pandemic.

Today, her Tanjore style paintings made with coffee waste sell at a price between Rs 50 and Rs 50,000. In March this year, Hima also started hosting art and language classes online.

Evidently, Hima is no stranger to life’s curveballs – they have hardened and wisened her to emerge stronger, and against the odds.

As she divides her time between teaching art and languages and contemplating on her own paintings, she misses a few perks of corporate life like a handsome paycheck and intellectual stimulations at work.

However, Hima is more than happy to have traded those for life as an artist.

“A strong woman raised me”

One of her recent paintings is of Goddess Durga. She dedicates it to her mother, Leela Kumari, a retired professor. In her lowest moments, when she felt suicidal, Hima says her mother’s face surfaced before her eyes, and taught her to fight the feeling.

When she felt challenged at work, her mother advised her thus, “when an elephant walks, dogs bark, so know your self-worth”.

At events and media interactions Hima makes it a point to tell her audience that life has not been easy, especially as a divorced single woman. And the reason for her success is that she was raised by a strong woman.

As Hima shares the story of a rollercoaster of a life that she has gracefully traversed, a particular quote by American actor Mae West comes to mind: “It is better to be looked over than overlooked.”