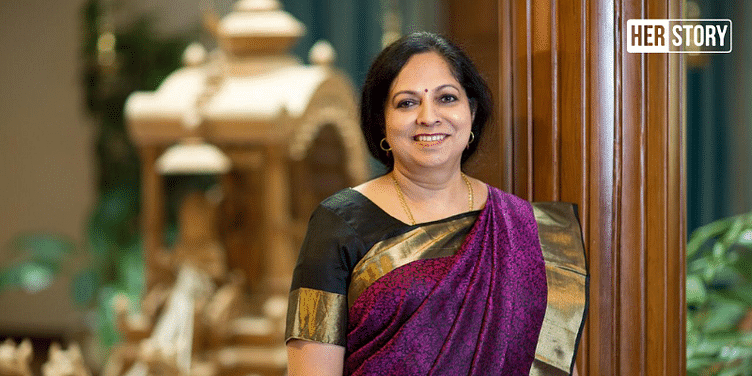 Manoj Kumar KV is an MBBS graduate and one among the frontline workers of COVID-19, interning as a doctor at the Gadag District hospital in Karnataka. He was raised by his mother who worked as an agricultural labourer after he lost his father in an accident.

His determination to become a doctor was steadfast since he was a young boy. At 14, Manoj survived a life-threatening health condition that further fuelled his resolve. However, it would have been difficult to realise his dream without the support from Vidyadhan, a scholarship programme for higher studies from the Shibulal Family Philanthropic Initiatives.

He is among 30,000 applicants in need of funds for higher studies from which 1,000 get selected.

“While joining the Vidyadhan programme in Karnataka many years ago, Manoj told us he wanted to save other people’s lives like the doctors who saved his and also provide his mother a comfortable life. Today, he is doing both,” says Kumari Shibulal, Founder and Chairperson of Shibulal Family Philanthropic Initiatives (SFPI), founded in 1999.

The idea, she says, is to help children from underprivileged backgrounds pursue a holistic education that will enable them to help their communities as well. The philanthropic organisation also initiated Ankur, a student residential scholarship at Samhita Academy, a CBSE-affiliated school with campuses in Bengaluru and Coimbatore.

Over the years, the organisation has branched out with several programmes including Shikshalokam for leadership development in 2012 and Edumentum, an incubation for social enterprise in education in 2015. Saathiya is another programme for students who wish to pursue a career in hospitality.

With more than 120 narrators on board, this platform is spinning stories in indigenous Indian languages

It is said that the journey of a thousand miles begins with a single step. For the SFPI, the Vidyadhan programme began with scholarships to two students in Kerala. It now has 4,300 students under its care. In the last 20 years, the programme has helped more than 17,000 meritorious children from economically backward families from across India.

These children have ventured into various professional fields with the flagship programme churning out 230 doctors and 940 engineers. In addition to funding their education, it routinely organises workshops to instil holistic development including social and communications skills and career counselling.

Present in 10 states, she says the selection process for Vidyadhan, based on their class ten result, is the most challenging part. “We plan on taking 100 students from each state but there are always more than just 100 deserving students,” Kumari adds.

Inspired by Sudha Murty, this 14-year-old has started a venture to inspire youngsters to work for social causes

That is when she started Each One, Teach One, to get sponsors – both individuals and corporates – on board and has been able to help a thousand additional students every year. Kumari says sponsors can send money directly to the students and the organisation only helps with the selection process. This includes the likes of UST Global, Flex India, Fanuc India, and individuals who also impart soft skill training and often sit through the selection process as well.

To be eligible for the written test and the interview round, the student’s annual family income should be less than Rs 2 lakh and he/she must have secured at least 95 percent in Class X.

“They have the fire in the belly. And we can see the enthusiasm during the interview where 99 percent of the students show that they want to do something and help their family members,” Kumari adds.

A recent survey conducted by the organisation in partnership with IIM-Kozhikode revealed that most beneficiaries have been able to uplift their families from poverty, within two years of completing their education. They also go on to become role models in their villages and communities.

Kumari's involvement in the groundwork and the children's journeys clearly shows as she shares the names of students who have cracked and topped competitive entrance exams like, “Vineet Kumar from Karnataka topped NEET in 2009 and got into AIIMS, Anita from Kerala secured first rank in JEE...” and the list goes on.

What’s heartening to note is that many of the beneficiaries are carrying on the circle of giving and receiving by sponsoring other children. Life at SFPI came full circle when the first scholarship student completed higher studies and joined the organisation as a finance controller, ten years ago.

With the surge in COVID-19 cases, Kumari says that training in soft skills, career counselling, and for NEET and JEE are being successfully conducted online, except for few students facing connectivity issues.

Hailing from a family of farmers, Kumari says she wants to impart education to more children because of the role it has played in her life. So, when students tell Kumari that they want to be like her and do philanthropic work, she suggests that they pick up a book and read it to a child and help with their studies.

If there is anyone who can stand up for women, it is women