Timeless words from author Margaret Mitchell's Gone With the Wind 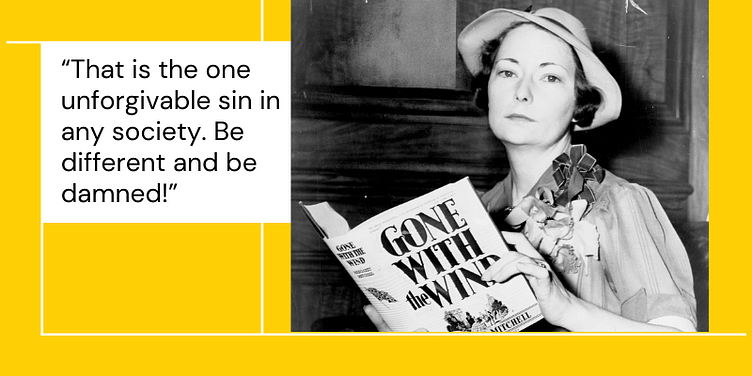 On the birthday of author and journalist Margaret Mitchell, we bring you these inspiring quotes from her Pulitzer-winning novel Gone With the Wind.

Author and journalist Margaret Mitchell's Gone With the Wind was her only novel in her lifetime. The literary masterpiece plunged her to stardom as she won the National Book Award for Most Distinguished Novel of 1936 and the Pulitzer Prize for Fiction in 1937.

Set in the 1860s and 70s America during the Civil War, the story is about a girl named Scarlett O’ Hara, her survival during the difficult times, and how people emerged from uncertainty and storms in life.

It is also remarkable that the story was hailed for summing up America during the Civil War and reconstruction period when Margaret herself had not lived in that period. In an interview in July 3, 1936, the author shared about growing up hearing about Civil War and digging out newspapers, letters, and diaries of the past.  These efforts eventually culminated into a story that continues to enthrall readers even today. The book was also adapted into a movie with the same title.

On Margaret Mitchell's birthday today, here are 16 timeless quotes from the historical story.

“Life’s under no obligation to give us what we expect. We take what we get and are thankful it’s no worse than it is.”

“And apologies, once postponed, became harder and harder to make, and finally impossible.”

“Burdens are for shoulders strong enough to carry them.”

“Never pass up new experiences, Scarlett. They enrich the mind.”

“Fighting is like champagne. It goes to the heads of cowards as quickly as of heroes. Any fool can be brave on a battlefield when it's be brave or else be killed.”

“You’re throwing away happiness with both hands and reaching out for something that will never make you happy.”

“Most of the miseries of the world were caused by wars. And when the wars were over, no one ever knew what they were about.”

“That is the one unforgivable sin in any society. Be different and be damned!”

“It was better to know the worst than to wonder.”

“Until you’ve lost your reputation, you never realise what a burden it was or what freedom really is.”

On World Vegan Day, these celebrity quotes will help you make a compassionate choice

On women’s role vs ability in society

“It's a very bad thing for a woman to face the worst that can happen to her, because after she's faced the worst she can't ever really fear anything again.”

“The man owned the property, and the woman managed it. The man took credit for the management, and the woman praised his cleverness. The man roared like a bull when a splinter was in his finger, and the woman muffled the moans of childbirth, lest she disturb him. Men were rough of speech and often drunk. Women ignored the lapses of speech and put the drunkards to bed without bitter words. Men were rude and outspoken, women were always kind, gracious and forgiving.”

"A startling thought this, that a woman could handle business matters as well or better than a man, a revolutionary thought to Scarlett who had been reared in the tradition that men were omniscient and women none too bright."

“She was going to rush into life and wrest from it what she could.”