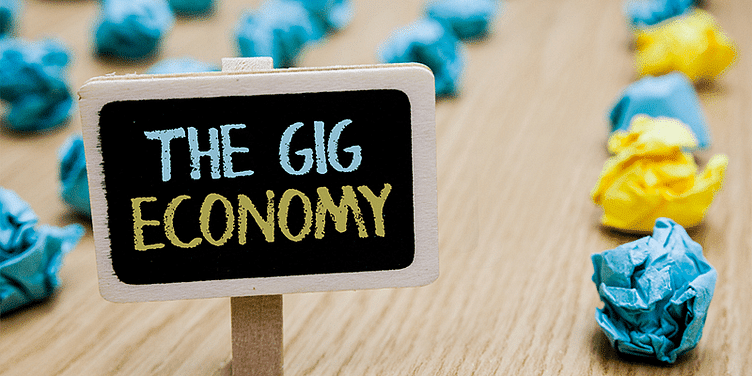 India’s gig economy has gone from rarely understood to shaping the country’s employment scene. HerStory explores how women are faring with this trend.

Suman Kanodia has been visiting one house after another to offer salon services since 2015 when she joined ﻿Urban Company﻿ (earlier known as Urban Clap) in Delhi. Turning her back to full-time work of long rigid hours to become a ‘gig-er’ has increased her income by four times. Suman is the sole breadwinner in her family of four.

She is not only able to take care of her two children and tend to her husband who is suffering from a kidney-related illness but also sets some money aside for savings. The flexibility of fixing appointments at her convenience also allows Suman to balance work and household responsibilities.

Workers like Suman across levels of the workforce are fuelling India’s gig economy that is expected to increase at a compounded annual growth rate of 17 percent and reach $455 billion by 2024.

Last month, Finance Minister Nirmala Sitharaman promised social security benefits to gig workers while announcing the Union Budget 2021. She also said that women will be allowed to work in all categories and cover night shifts with adequate protection.

Gayathri Vasudevan, Chairperson, ﻿LabourNet﻿Services India believes the next decade will see a complete transformation with new products and services pertaining to social security will be designed for all types of gig workers.

“Women will benefit when they belong to such groups. For example, only formal sector workers have access to maternity benefits. There is no question of such benefit among the poor,” she says, adding that new structures should be designed with participation from women. Gayathri holds a PhD in Development Economics and International development and was awarded Entrepreneur with Social Impact by Forbes India in 2018.

Sahil Sharma, Co-founder and CEO of ﻿GigIndia﻿, says such policies if well-implemented will encourage more women towards the task-based economy where attrition has been a major problem.

The Pune-based platform boasts of a significant rise in female gig workers during the pandemic. Where the platform was faring with mere 12 percent women out of 5,000 gig-ers in April 2020, participation grew by five times (120 percent) within six months and now, women make up nearly 47 percent of the gig workers.

This may have to do with the fact that boundaries were blurring with remote working during the pandemic and more workers from Tier II and III cities like Nagpur, Patna, Bhubaneswar, and Visakhapatnam began seeking work.

Sahil emphasises there is no pay parity. “In the gig economy, there is no difference in what we pay men versus women for the same work as long as the task is performed as needed,” he adds.

While Gayathri believes there are equal opportunities for women in creative industries as a gig worker, she says, “90 percent of women remain outside the formal workforce and this is the time for companies and policymakers to really engage with women and structure something relevant for them”.

Even in white-collar jobs, she reiterates the need for companies to take action against sexual harassment and respect time, especially during the pandemic, and rethink mental health.

Gayathri says the logistic sector has seen exponential growth and scope for gig workers, but it is dominated by men taking delivery jobs of all kinds.

She believes there will be more opportunities for women gig workers in the informal segment in areas of accounting and tech support.

“I would say men have benefited more from the gig economy and I have no data to show that women benefitted in any significant way. At this point in time, it is a wait-and-watch situation,” she concludes.