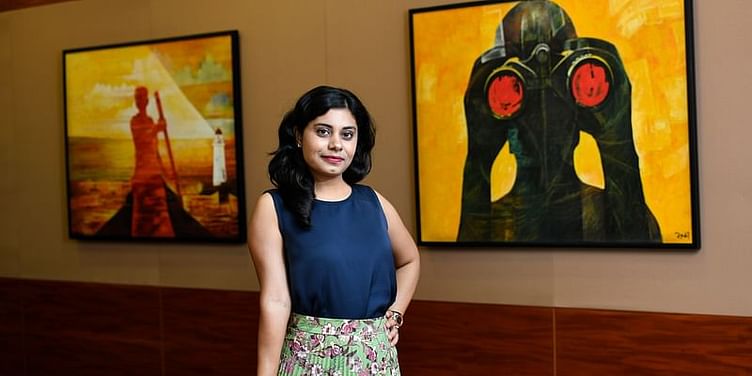 Natasha Malpani Oswal has been an investor, author, and producer. In a conversation with HerStory, she shares her knowledge, insights, and experience from her interesting portfolio career.

A new-age author and producer, Natasha Malpani Oswal is a big believer in the power of storytelling. Well-known for creating content for the online medium and OTT platforms, she previously led media startup Dice Media, writing stories that are locally rooted and resonate globally. She now runs Boundless Media, a production house that makes high-quality shows and films.

A storyteller at heart

The journey into the creative world was a little different for Natasha. Brought up in a family of doctors, academic achievement was the primary focus. From studying medicine and investing to finally storytelling, Natasha found her path through different trials.

She says, “I always came first in school every year and was very focused on pleasing the adults in my life, so the obvious path for me was to study medicine. I studied immunology at the University of Oxford but quickly realised I was not cut out to be a doctor. I then studied development at the University of Cambridge, and worked in impact investing for five years in London, before pursuing an MBA at Stanford University. All through this journey, I was always a storyteller at heart - I was a part-time journalist and wrote for various publications.” She has also published two books - Boundless and Reinvention.

In hindsight, Natasha realises she has always been a storyteller. She says she loved reading while growing up.

“Punishment for me was having my library card taken away,” recollects Natasha. At the age of nine, she started her first startup - a library, which was a small service that gave books to her friends. But it never occurred to her to choose it as a career.

“I asked myself two questions - what do I do in my free time, and how did I spend time as a child. I realised that the answer was staring me in the face. I didn’t need to follow a ‘traditional’ career path in investing or medicine. I could follow my own heart. The Stanford MBA taught me to be a little less practical and allow myself to dream,” says Natasha.

So, after living abroad for 10 years, Natasha joined Pocket Aces as the Head of Dice Media. It was a big jump - from being an investor in London to being a producer in Mumbai. Natasha had the chance to build and lead creative teams, oversee the scripting and production of several shows - including a Netflix original.

100 Emerging Women Leaders: The story of Radhika Iyer Talati, an entrepreneur and a two-time cancer survivor

The world of filmmaking

However, learning to work in India has been a big shift in mindset. Natasha says the production industry is messy, unstructured, and slow.

“Because I got to jump into the world of filmmaking at a senior level on day one, I was very lucky to be able to dive head-first into all the joys and challenges of filmmaking very quickly. It was a learning curve, but I was quite surprised at the many similarities between investing and production - I think my previous experience as an investor has really helped me,” she says.

At Boundless Media, she focuses on telling experimental and genre-bending stories. Natasha adds the Gen Z and millennial audiences are very smart. “We know what our audience wants and deserves. They watch content from all over the world, and hold us to a global standard,” she adds.

Natasha says the team is now focused on quality. They work on a few select projects in the year but then go above and beyond to make sure they are stellar.

“We spend a lot of time on development and scripting before we consider going in to shoot. When our audience can choose content from all over the world, we know it’s important to focus on quality,” says Natasha.

She says the idea of Boundless Media came to her with the idea of telling stories for a new India. Natasha adds she wanted to build a creative house that focused on quality over quantity when it came to making shows and films.

The entertainment landscape has changed dramatically with the advent of the internet and the OTT ecosystem, and more importantly, the audience has changed in terms of taste and consumption patterns. Today’s audience cares less about language and faces, and more about the story.

“We have barely scratched the surface. There are so many opportunities to innovate when it comes to making new-age shows and films. The two lockdowns have made production challenging, but we’ve made three series (Unseen and Cancelled are streaming on MX Player and Brave New World is on Disney + Hotstar) and two films for festivals since February last year,” says Natasha.

Talking about Brave New World, Natasha says, it is a series that looks at how media is reshaping the way we look at ourselves and the world. Starring Anurita Jha, Keshav Sadhna, and Akashdeep Arora, the series explores worlds where patriarchy wins, friendship is for sale, coffee is a drug, and being haunted by your own mind is scarier than being haunted by a ghost - in a darkly funny way.

“I love dark comedy and satire because you can make fun of things that are absolutely true. With all the unimaginable events happening in the world, we wanted to showcase a twisted world, that could soon be the world we live in. We chose to take a dark comic tone with Brave New World so that we could laugh – nervously - at the madness that we are all a part of now,” says Natasha.

However, shooting during and in between lockdowns has definitely been challenging. The team has faced every hurdle from directors and actors testing positive for COVID-19 right before the shoot started to losing locations because of lockdown and not being able to plan or edit in person.

“We have become extremely creative about working remotely with large crews,” says Natasha.

She adds, “I’m learning to balance proactivity and planning by making room for randomness and mistakes. You can’t control every aspect of a creative process, but you also can’t expect everything to fall into place by itself.”

Today, in retrospect, Natasha realises that you don’t always need to have a plan. Just jump in and figure it out along the way. No one has the answers really. You will only know what’s possible once you start.

Advising young producers, Natasha says, “Filmmaking is a very collaborative and risky process. It takes hundreds of artists to make a great film. Find and surround yourself with the best talent possible and trust your team, root for them, and allow them to do their best work - that’s where the magic happens.”