[HS Conversations] Politicians provide the premise for my videos, I just figure out the punch line, says comic Saloni Gaur 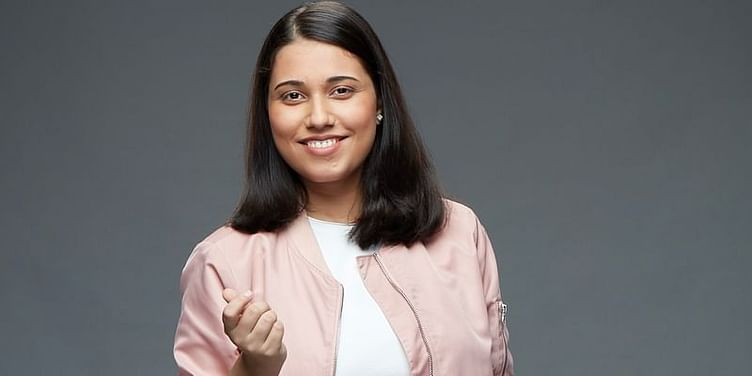 In a freewheeling chat with HerStory, YouTuber, comic, content creator, and influencer Saloni Gaur tells us what she’s been doing for the past year and why she aims for consistent, relatable content.

If there’s one comic that constantly and consistently has us rolling in laughter, then it has to be Saloni Gaur aka Kangana Runout, Nazma Aapi, Du Wali Didi, Adarsh Bahu, and a plethora of characters who have now become a part of our everyday dose of humour.

As someone who’d like to be in the “politics of things” comedy-wise, Saloni doesn’t spare our netas (politicians) either. She tells HerStory in a free-wheeling conversation, “They always provide the premise for my videos. I just have to figure out the punch line.”

In one year, Saloni’s follower count has crossed 282,000 followers on Twitter and over 550,000 on Instagram. An incredible achievement for this 22-year-old is her character Nazma Aapi, who holds forth on everything current and in-between with a thick Western UP accent.

A slew of characters

But it’s her character, Kangana Runout, that seems to draw the most guffaws. For instance, her recent spat with the actor who demanded a ‘fine or imprisonment’ for having a third child. When Saloni replied with a screenshot that showed the actor has two siblings, the actor called her comedy “a joke.”

“People were dying, and she was talking about the population. I didn’t even bother to reply but just posted a screenshot of her bio. She blocked me, but then you know what happened, Twitter suspended her account, and I didn’t really have to reply,” says Saloni with a laugh.

This brings us to the point that content creators are always thrown into the limelight for the right or wrong reasons. This happened when Saloni recently posted a picture of taking the vaccine. People wondered how she got a slot so easily while others were trying hard to get one.

“It was the first day of vaccination for the 18-44 age group in Delhi. When I went to the centre, I found that it was badly managed and tweeted about it. Immediately, there was a response and things turned around. I got my vaccine, and people thought I got it because I supported a certain party. They did not know that I was trying for two days continuously and got a slot at 1 AM. When I tweeted the story, they understood, and it was fine,” she says.

With over 708K followers on Instagram and hot takes on current topics, Abhi&Niyu are riding the social media wave

During COVID-19, especially during the second wave, Saloni has been amplifying requests for help. She says influencers, with their large follower base, can make a difference.

“I just tweet the requests. Also, I have certain contacts to help me. It’s easy to just make a call. And, if we can’t even do that, it’s a shame,” she points out.

Her comedy continues to centre around social issues and takes. “I have always been interested in politics. I don’t hesitate to put my views out there. In our country, sadly, there are two extreme sides, nothing in the middle. You need to take it constructively, and I am open to criticism without the gaalis (abuse),” she says.

She believes “consistent, continuous, and relatable content” have contributed to her success.

“If you want to increase your audience and follower base, do it with all your heart. I did not have any end goal, I did initially for my own entertainment, and it turned out to be something people could relate to,” she adds.

Saloni also bagged her own show, Uncommon Sense with Saloni, on SonyLiv.

Recounting the experience, she says, “I had bad WiFi when I was in a meeting with them, and only after the call did I know that I had landed a show and that too during the pandemic. It was a wonderful learning lesson, shooting at a stretch, understanding sketches, etc.”

She is also in talks with producers and adds that she will reveal her new projects soon.

Till then, Kangana Runout, Nazma Aapi, Adarsh Bahu, and others will continue their shenanigans online, regaling us with their antics.