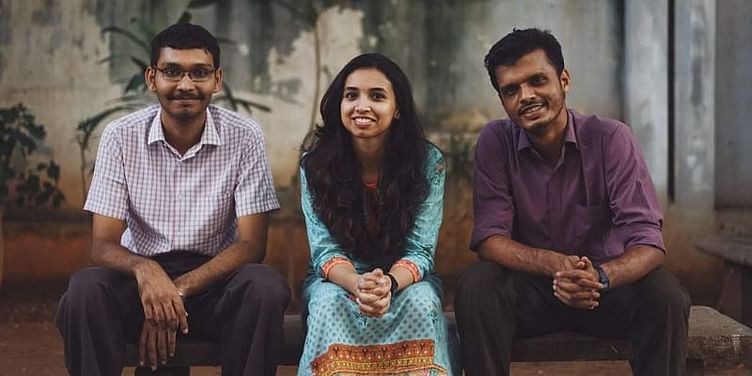 LonePack is a volunteer-led organisation that creates awareness on mental health issues to start a meaningful dialogue among Indian youths while providing access to reliable information and support.

“I have struggled with mental health issues and depression since my teens. I was privileged enough to have supportive parents who ensured I had access to professional help when I needed it. This experience opened my eyes to the widespread nature of mental health challenges and the sheer number of people who were struggling in isolation,” Samiya tells HerStory.

In 2015, the trio started ﻿LonePack﻿ — a volunteer-led organisation — which creates awareness on mental health issues to start a meaningful dialogue among Indian youths while providing access to reliable information and support.

They set up a Facebook page in July 2016 and registered it as a non-profit later that year. India has a severe paucity of mental health professionals — less than one psychiatrist for 100,000 Indians. Samiya says they believed community-led initiatives and technology could play a great role in levelling this gap.

“As one of the earliest youth organisations to start working in this space — as a bunch of inexperienced youth just armed with passion — we didn’t think we’d get very far. Yet, we were unafraid to ask for help from professionals and other mental health advocates. Over time, we built a team of dedicated volunteers and launched multiple initiatives, refining our efforts through trial and error,” Samiya adds.

After building a lingerie brand, this entrepreneur decided to start a home-cooked meals startup for pets

Fresh from college, can you do it?

Fresh college graduates — with no experience and academic background in mental health — the trio was not taken seriously early on in their journey. They reached out to a lot of non-profits to help in developing the initiatives. However, they thought the students would not last for long.

Additionally, they had a few concerns about their plans to leverage technology to make the initiative scalable and accessible.

But one organisation, MINDS Foundation, believed in the trio’s vision. Samiya says, “Dr Raghu and Pragya Lodha helped design our volunteering training and evaluation module. The course we developed trains people on the basics of mental health and equips them to be empathetic listeners.”

As part of its initiative to improve awareness and create engaged communities, the startup conducted numerous workshops, webinars, and discussion forums on different aspects of mental health at school, college, and corporate levels.

Earlier, the team covered topics on the impact of technology on mental wellbeing and mental health at the workspace.

Amidst the COVID-19 pandemic, everyone was unprepared for the huge impact it had on the mental health of young people across India. Many were cut off from their regular coping mechanisms and support systems while often being stranded in hostile domestic environments.

In fact, the lockdown put an end to all in-person campaigns and workshops.

“Lots of people reached out on our social media pages seeking emotional support. Realising the scale of the problem, our team worked on a war footing to help people whose mental health was severely affected,” Samiya says.

While the Chennai-headquartered startup had launched a pilot version through email sometime back, it worked tirelessly to build and launch the website in May 2020 and enhanced its volunteer training module.

This July, LonePack completes five years, and its content is now run by Srivasupradha Ramesh. She also handles the startup’s blog that produces thoughtful articles on mental health.

LonePack Buddy is a free, online, anonymous peer-to-peer support system for people who need a safe space to talk about issues affecting their mental wellbeing.

Through the Buddy initiative, LonePack is addressing the lack of a supportive community; the stigmatisation of mental health that prevents people from sharing their experiences; and the lack of knowledge on how to treat it.

They can access the service through its website or Android app, which facilitates an anonymous conversation with volunteers trained to be empathetic listeners. Within the first couple of days, the app was downloaded close to 100 times.

To date, it has helped with over 1,700 conversations, with over 93,000 messages exchanged on the platform.

The conversations range from talking about their emotions to queries on professional support, including reaching out to counsellors/psychiatrists, etc., awareness of their rights, and more.

“Our efforts were vindicated when LonePack Buddy was selected to be incubated by Youth Co:lab — an initiative of the UNDP and Niti Aayog. As part of the incubation programme, we are working to better develop LonePack Buddy to mitigate gender-based violence and promote LGBTQ+ livelihoods. We are also working on developing a financial model to make LonePack Buddy a sustainable social enterprise,” says Samiya.

The startup is largely been self-funded, but it receives grants for specific campaigns from the Swedish Institute and Uber Eats. Samiya says they want to make LonePack Buddy financially self-sufficient to benefit more people.

“We do not intend to charge laypeople who access LonePack Buddy. We intend to offer customised solutions for institutions, including corporates, schools, and colleges, at an affordable cost,” she adds.

At present, LonePack is looking at two approaches:

1. Helping people set up a website (without any coding, tech infra, or development requirements) for online peer-to-peer support systems on a monthly subscription basis.

2. Creating community-based peer support programmes for corporates, colleges, and other institutions, where it trains volunteers, manages the tech platform, and maintains the health of the volunteer community through periodic activities.

It is also accepting donations from those who believe in the cause. All donations are exempted from taxation under Section 12-A/80-G.

Meet Sakshi Bakshi, who is bringing healthy and tasty meals to your doorstep

While Samiya will soon be starting her MBA at Wharton in August, Naveen is doing his MBA at IIM-B, and Siddharth is an Assistant Analytics Manager at Razorpay.

“Meanwhile, LonePack has grown to a team of about 30 odd volunteers. It has reached over 100,000 people. But, I strongly believe that this is just the beginning of our story. We still have a long way to go,” says Samiya.

At present, the team is focusing on enhancing its tech platform to better help people in need of emotional support. It is exploring ways to incorporate activities to help people de-stress.

“As part of the UNDP-Niti Aayog incubation programme, we are looking at focusing more on the intersectional nature of mental health in our volunteer training curriculum,” Samiya says, adding the startup want to provide more modules that look at mental health through the lens of social factors related to gender, sexuality, caste, and class.

The trio believes LonePack needs to involve every member of the community in creating solutions that are based on community-led, peer-based support.

Similar to how people are trained to give first aid, the startup aim to create a society where people are also equipped to provide emotional first-aid.

“Having worked in companies that revolutionised different industries through tech, we strongly believe that technology can be a great enabler in making mental healthcare accessible to vast segments of the Indian population who are underserved by the current system,” says Samiya.