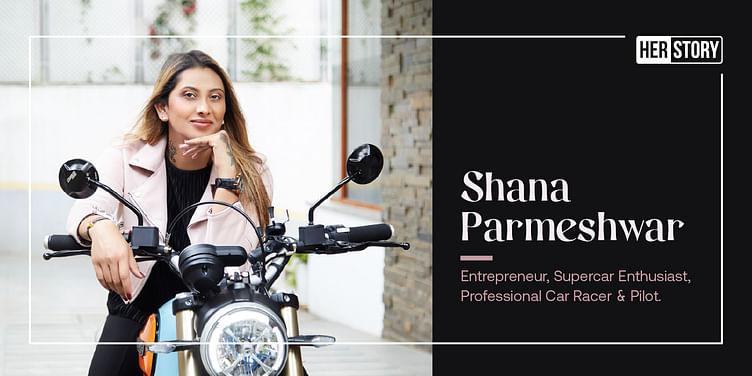 Shana Parmeshwar, along with Anush Chakravarthi, is on track to building India’s longest racetrack of a 5.5km stretch in Anantapur, Andhra Pradesh. The entrepreneur talks to HerStory about the different facets of her life, from being a pilot, motorcar racer, to an entrepreneur.

Soon, she, along with her partner Anush Chakravarthi, will hold the distinction of giving India its longest racetrack of 5.5 km, coming up in the Anantapur district of Andhra Pradesh.

Shana is launching this race track with The Marque One Motor Club — a certified FIA Grade 2 and FIM Grade B — spread over a whopping 219 acres. This would allow the track to accommodate cars with a power-to-weight ratio of 1hp:2-3kg and be open for a broader scale of international racing events.

Born and raised in Bengaluru, Shana’s interest in racing goes back to her childhood when she was fascinated by fast cars, a passion she shares with her father. She moved to Malaysia for higher education with an interest in aviation.

On the fast track

While in Malaysia, Shana’s interest in motorsport grew. Between 2005 and 2009, she was an integral part of the legendary K1000 rally in India. In fact, she participated as their official safety driver.

Since then, Shana has been a part of several events in various parts of the world and has driven on a wide variety of terrains, including ice.

From circuits in Malaysia to Sweden to England, Shana has driven various race cars, including Volkswagen, Porsche, and Lamborghini. She is a well-known and popular figure in the automotive community, with a large following of her own.

When her interest in aviation peaked, Shana moved to New Zealand for training and ended up flying tourist planes and commercial jetliners in the country.

At one point in her life, she even contemplated a full-time flying career in Botswana.

“I had my hands full pursuing my dreams. From New Zealand, my next stop was London, where I started an import-export business in the automobile industry. As the journey progressed, I started to build some “me-time” into my life for professional racing,” Shana tells HerStory.

Besides being content with aviation, motorsport, and entrepreneurship, Shana also volunteered with the Red Cross and dabbled in entertainment as a DJ.

Shana says she did not want to piggyback on her family’s reputation as leaders in the education field.

“It’s easy to take up somebody’s walking stick and move forward. I chose to do everything differently without any last names involved. That was challenging, and I thought that if it takes time, it’s fine; I am happy to build my reputation. That was one of my cheeky motives, if you’d like to call it that,” she says with a laugh.

A car has no idea of your gender

“Was being a woman motorcar racer challenging?” Shana admits to being asked this question every single time.

“It’s no different than for anybody else because the car has no idea about your gender, and you don’t need physical strength to race cars. You need tactical skill, and I believe women have a lot of that,” she says.

She believes in the “right place at the right time” and overcoming challenges, and there’s no distinction between male or female.

“I think if you are good at what you do, it changes the game. And it's important that women just don't go and make an absolute fool of themselves. But they don’t. It's just that assumption that women do. So it’s heartening to see several women making their mark in motorsports in India and internationally,” she adds.

Shana emphasises that racing is beyond just Formula One. There are other forms of racing — you can start with something basic as go-karting and work your way up.

Having raced most of the racetracks in Europe and India, Shana also holds the “fastest woman in a production car” at the Buddh Circuit 2019, and drove the first Indian car to participate in the Modball rally in 2017 (UK/EU).

“What I most love is being on track and driving faster than the boys. I cannot help, but I give them a big cheeky smile every time I overtake them. Then after it’s over, I come back and give them nice big hugs, saying, ‘Oh, I’m so sorry, I didn’t see you’,” she says.

Shana agrees that the 5.5 km long racetrack in Anantapur is an ambitious project for India.

She explains, “People think everything’s related to Formula One, but in racing, there are different grades. So we decided to go in for a Grade B track, where everything except Formula One can be hosted and introduced to a wider audience.”

The track will be built alongside other amenities like a resort, restaurants, residences, and educational institutes. Designed by architects in Europe and constructed by Anush’s construction company, Shana says it will have “a European feel to it”.

“We originally started with the idea of a 3.2-kilometre racetrack and decided to make a statement with the biggest track in India and one of the biggest in Asia since we had the space for it,” she adds.

Construction at the site — just 40 km away from Bengaluru — is underway with around 3.5 km of track already cut.

“We are in line to complete it in 1.5 or two years when we will be opening our doors to the public,” she says.

The initial plan was to establish the racetrack in Karnataka, but Shana faced several hurdles at every step. The Andhra Pradesh government proved to be more welcoming with their support, and the location is a win-win as Anantapur is not too far from Bengaluru city.

“The cost of the project would be around Rs 150-200 crore, and we are raising funds through investments from individuals and some banks. We are in talks with international investors, but COVID-19 has made the process long-drawn and frustrating. It’s also not easy to get your project proposal across to people who don’t understand motorsport,” Shana says.

While she may be living the multi-tasking life to the fullest, Shana says she’s not the kind that likes to add feathers to her hat.

“I see every opportunity as a chance to gain knowledge and experience because all I want to do when I am on my last breath, when I look back is that I’ve done everything well and lived a life without regrets,” she says.