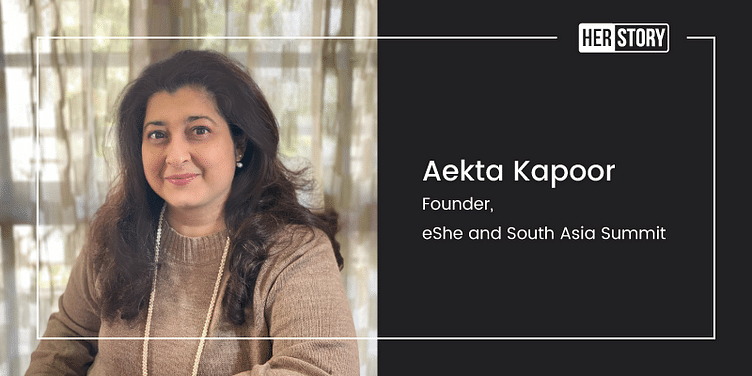 The South Asia Union Summit Led by Women – the brainchild of former journalist Aekta Kapoor to be held from October 2-3 will bring 45 women from all over the world to deliberate on women’s leadership and humanistic approach towards handling conflict.

Putting the spotlight on women and leading the way in peace-building between India and its neighbouring countries, media entrepreneur and founder of ﻿eShe﻿, Aekta Kapoor is all set to launch the South Asia Union Summit Led by Women from October 2-3.

Around 45 women from all over the world will come together to discuss world peace, women’s leadership and humanistic approach towards handling conflict among others.

Journey from fashion to peace-building conversations

Aekta started eShe in 2016 — a digital and print magazine that focuses on women’s work and social issues that impact women adversely.

She was always an integral part of the media industry being the managing editor of Harper’s Bazaar Bride, leading the fashion 101 team at Dainik Bhaskar, Marie Claire among others in 15 years of her professional career.

However, over time, she realised how these magazines perpetuated unattainable beauty standards for women and feeding the male gaze.

“eShe started out as a personal blog but I desired to have a magazine that inspired and featured women creating value in the world. I was disillusioned with photoshopped images of women in fashion magazines. I saw the negative impact on young girls when my own daughter would tell me that she would never want to feature in these fashion magazines. I could see how the photoshopped images were creating body image issues among adolescent girls,” Aekta told HerStory.

She adds, “After a while, I realised I didn’t want to work in an environment creating such a negative impact on the minds of young girls. I wanted to celebrate regular women and our shared humanity. In 2016, I could see that the media was increasingly becoming polarised and I wanted to create a place where we see humanity in each other. Interestingly, I set out to inspire women and show the real side that women do read women’s stories and feel inspired by them.

Over a period and because of my own longing to work towards peace, eShe became more about a conversation of peacebuilding and conflict resolution among women. It has always been an international platform since I have been featuring women from all over the world. My worldview has been about learning from each other devoid of our geographical borders.”

In December last year, she featured three-time Nobel Peace Prize nominee Dr Scilla Elworthy who is well-known for her campaign for nuclear disarmament. In her interview, Aekta asked her about peace between India and Pakistan and Dr Scilla suggested that she should use her platform and women’s voices in raising the issue. This inspired Aekta to launch an Indo-Pak Peace Summit a few weeks later and a South Asia Summit now.

Peace over conflict in the current times

On prodding Aekta over the current political state, intolerance, and angst against India’s neighbouring countries, especially Pakistan, she says that eShe is a non-profit initiative and she is completely non-partisan where she isn’t trying to oppose anyone’s political views. “I think what’s going in my favour is the fact that it’s all led by women. I am using my soft power as hard power. I am using the idea of empathy, inclusivity, and love. I am not speaking against anybody. I want people to understand each other’s points of view and be there for each other,” she says.

Aekta also emphasises on the need to have a big heart to have courageous conversations.

While women are known for their peacekeeping abilities,Aekta says it’s difficult to remember peace-building conversations across countries being led by women at large. She points out that most countries are led by men and that has perhaps added to the rising conflict.

“There’s been a lot of male energy, which focuses so much on divisive behaviour, short-term gains and power whereas when women come to power, they are more inclusive leaders, and they create more spaces for people to grow. There are several conversations already happening around having more women at peace-negotiation tables because studies have shown that peace treaties made by women last 15 years longer because women are long-term thinkers. This will also put the focus on women’s leadership,” says Aekta.