This new mother set up an online thrift store for parents to buy and sell kids clothes, accessories, books, and more 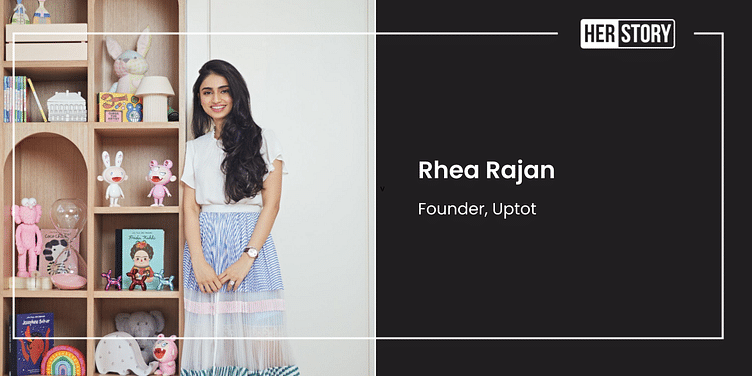 Rhea Rajan’s experience as a mother led her to found Uptot, a Mumbai-based online marketplace to buy and sell pre-loved children’s books, clothes, toys, and other accessories.

It is a universal feeling for parents to want the world for their little ones. This may be manifested in elaborate preparation of everything from clothes to toys and other accessories for newborns and young toddlers.

Rhea Rajan, who became a mother during the pandemic, tells HerStory that in the first two years of having a child, “one will have a room full of stuff”.

“We were in New York and shopped for everything a child would need in the first six months and it was a truck full of stuff. After coming back to India, she outgrew everything we had bought in six months,” she recalls.

Rhea and her husband felt there had to be a way for people to make some cash back as they were making a huge "investment" for merely a few months of use. Noting the gap and a highly unorganised market, Rhea founded ﻿Uptot﻿, a marketplace for parents to buy and sell new and used baby and children products like toys, clothes, books, and other gear.

She started work four months ago with a team of five people, including herself, and the Mumbai-based platform has been live for nearly two weeks now.

Born and raised in Mumbai, Rhea joined her family business of ice cream shortly after completing her master’s studies in marketing from Warwick Business School in the UK.  Entrepreneurial at heart, she worked in almost every part of the business including sales and purchase, recruitment, marketing, and branding, which involved frequent visits to kirana stores to gauge the brand's market. She also rebranded the company to optimise for both offline and online markets.

She says her first six to seven years of work were filled with lessons that now help her in building a startup of her own.

Rhea says Indian parents would either discard the products, pass them on to other family members, or sell through social media groups. Parents had to navigate a highly unorganised market that involved multiple discussions with sellers just to finalise a purchase. Not having a set format to follow was also an initial challenge for the startup.

As a working parent herself, she knew the process had to be seamless and quick. The platform now claims to allow users to sign up and put multiple products for sale within five minutes with information like product type and condition (whether brand new, gently, or heavily used), brand, and pricing.

Although users will also share personal details like name, place of residence, and phone number, the startup made a conscious decision to keep seller details confidential as there is still stigma associated with selling one child’s belongings.

Uptot charges 20 percent of the price as commission, of which 10 percent is the shipping cost. Sellers can also leverage the marketplace to reach a specific audience of parents.

“For the first three months, our focus is Mumbai alone. Although we have the infrastructure to ship across India, we want to iron out all the issues that we may face and ensure the customer gets the product within a day or two,” Rhea explains.

All the 45 orders received so far has been fulfilled within a day via delivery partners like Dunzo and Shiprocket.

Parents for a sustainable world

Not having a set format or market data to follow was also an initial challenge. The entrepreneur looked through Facebook groups selling such products to understand the cultural sentiments parents share when it comes to reselling. This, along with mom bloggers and influencers, helped get the word out.

“It was also important to educate the parents on buying pre-loved and the environmental benefits. They are doing everyone a big favour by buying such products because parents consume so much and create so much wastage,” she says.

Rhea may have only just embarked on her entrepreneurial journey, but she is no stranger to gender bias. There have been instances where people assumed her work ethic will be affected now that she is a mother.

“But I proved them wrong by setting up Uptot in less than four months. I can raise a child and still focus to get my work done,” Rhea says.