Inspired by storytelling, this woman entrepreneur pivoted her learning initiative into an edtech startup 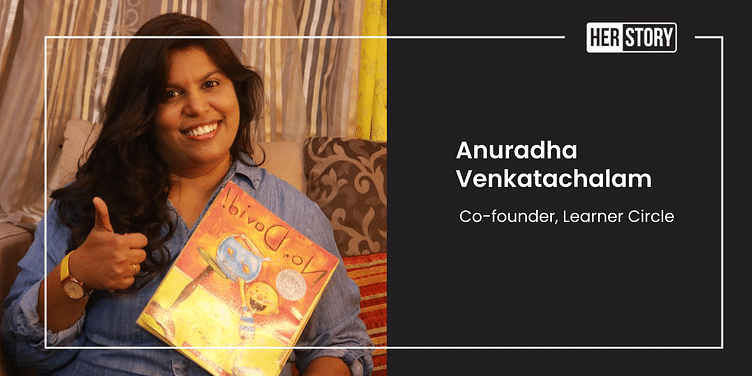 On May 1, 2020, Anuradha Venkatachalam had picked three children’s stories – We are going on a bear hunt, Pickle Mania, and Stick Man – and organised an interactive storytelling session with 23 children over a Zoom call amid COVID-19.

While children were spending most of their time online, the 40-year-old wanted to ensure that it was utilised meaningfully – and what better way than infusing it with good-old storytelling. After all, storytelling was Anuradha’s forte, having been an active storyteller as part of the Society of Children's Books Writers and Illustrators (SCBWI) in Singapore, and authored a few children’s books herself.

In hindsight, Anuradha realises that she was tapping into a lucrative edtech market in India whose addressable market size is estimated to be $10.4 billion by 2025. According to KPMG, the country is now home to more than 3,500 edtech startups, making up 10 percent of the global edtech market.

After several sessions on various skills and extracurricular activities, the initiative attracted positive responses, and what began as a quest to ensure quality time for children led Anuradha to entrepreneurship. Along with her husband Shankar Gomathinayagam and colleague Arun K Nair, she co-founded Chennai-based ﻿Learner Circle﻿.

“Doctors, nurses, teachers, and everyone was doing their bit when the world was facing a deadly virus. We also wanted to leverage our skills and passion as digital marketing professionals to connect students with experts and others like our yoga and fitness instructors with potential clients,” she tells HerStory.

Initially, Anuradha had put a meagre fee so that people value storytelling and origami workshops. With more than 70 teachers on board now, the startup offers a wide range of skill-based and live classes on Bharatanatyam, drawing, Vedic math, writing, musical instruments, and languages as well.

With the majority of its audience belonging to the NRI community, prices range from Rs 699 to Rs 12,000 for three months. Learners can sign up for a free demo class before enrolling.

Registered in May this year, the startup raised $100,000 in seed funding which will be used mainly to build curriculum and content, especially skills that will help prepare young learners for future jobs. It is further looking to raise $500,000.

“In 2030, about 65 percent of the children will be in jobs that do not exist today. Critical thinking, problem-solving, communication, and negotiation skills are very important,” she says.

The startup is hiring teachers to deliver a quality learning experience. Anuradha says in some instances initially, teachers interviewed to become subject matter would face difficulty when facing students online. The company has since included an additional round of interviews where teachers are required to teach and interact with actual students.

Despite operating in a competitive market with many established and new players, Anuradha considers entertainment channels like Pogo and Cartoon Network as well as video streaming companies like YouTube, Netflix, and Amazon Prime as their competitors.

"Everybody has only 24 hours and children get about four hours to spend on themselves after getting eight to nine hours of sleep and attending school. We believe we offer a good screen time to spend online as opposed to the entertainment companies," she quips.

Meet the woman whose organisation works for the upliftment of nomadic, denotified tribes in Maharashtra

Anuradha says the extracurricular courses were designed based on demands and inquiries from the parents which helped gain traction.

However, the trio did not focus on investing in technology and made do with off-the-shelf products and services as there were daily operational expenses to take care of. This led to one of its biggest challenges when their system was hacked causing the platform to take a week’s break.

"This happened at a time when we were doing really great in terms of organic traction. And suddenly, somebody from Japan was selling their products on our website,” she shares, sighing in relief that there was no sexual content that could be detrimental for its young audience.

But seeing the amount of inquiry and interest from its community of learners was validating and the entrepreneurs felt they were in it for the long haul.

The long-term vision, she emphasises, is to make skill-development and co-curricular learnings accessible to all, especially those hailing from non-metro cities and rural India.

“But for that to happen, we need to survive as a company first and so the focus now is to create our niche and space in the market, become stable, and then work on our personal goal of making quality learning accessible to all,” she adds.

In five years, the startup hopes to impact 100 million users.