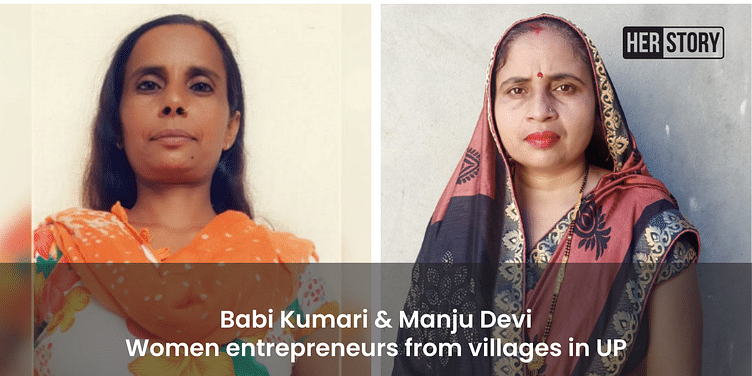 On Women’s Entrepreneurship Day, HerStory lauds the efforts of Manju Devi and Babi Kumari, entrepreneurs from villages in Uttar Pradesh who want to take their small businesses to great heights.

Entrepreneurship is much more than carrying an idea to fruition. It’s also a leap of faith – a belief in the idea and surmounting diverse challenges to find that calling.

In rural towns and villages, women are experiencing the power of the internet and ecommerce to take their small businesses to more prominent platforms. In August, Prime Minister Narendra Modi announced the government would develop an ecommerce platform for products made by women self-help groups (SHGs) in villages.

The Her&Now’s Entrepreneurship Support Programme in Uttar Pradesh, implemented by Deutsche Gesellschaft für Internationale Zusammenarbeit (GIZ) GmbH, on behalf of the German Federal Ministry for Economic Cooperation and Development (BMZ), and in partnership with the Ministry of Skill Development and Entrepreneurship (MSDE), Government of India, is also empowering women entrepreneurs in different states.

On World Entrepreneurship Day, HerStory features two intrepid women entrepreneurs from Uttar Pradesh who are marching on with courage and resilience and upskilling themselves for a better economic future.

The daughter of a construction worker, Manju Devi, stopped studying after Class 12 due to dire financial circumstances in her family. She passed a certified skill course in stitching and, post her wedding, moved to Delhi, where she worked as a tailor and taught other women.

On her return to her native village, Manju Devi continued to upskill other women and has taught sewing to more than 150 women so that they could start a business of their own. This, in a village, where women hardly went out to work until recently.

Buoyed by the support of her husband and son, Manju Devi decided to take her business to the next level. Now in her 40s, she is raring to go as she takes the next step towards upskilling and changing the course of her life.

“Once I was back in my village, I ran multiple batches of stitching and tailoring classes for women. However, with my husband’s unsteady job, I was hardly able to make ends meet,” she says.

GIZ’s Her&Now Entrepreneurship Support programme in partnership, with the Empower Foundation, came both as a relief and a blessing.

“While I continue stitching clothes for women in my village, the programme has given me the confidence to think differently by becoming an entrepreneur. I learned how to ideate, create a business plan from scratch, manage my finances, and understand what the customer wants. I can now look beyond my village,” Manju Devi says.

The 40-day course may well turn the fortunes for Manju Devi. She received a loan of Rs 2 lakh and has registered her venture, Kumar Creations, on Flipkart and sells roti flap covers, costumes for deities like Krishna and Mata Rani, and plans to add salwar suits, tops, and palazzos soon. She aims to also scale by selling on Meesho and other ecommerce platforms.

Kumar Creations is genuinely a family unit, with her husband accompanying her to purchase raw material from cities like Delhi and dropping off packages to Bulandshahr. Her son uploads photos of products on ecommerce websites.

Her dream is to open a shop in Bulandshahr now to sell her creations. The excitement in her village is also palpable. The women believe, “Agar Manju didi ko kaam milega, humhe bhi fayda hoga” (if Manju gets more work, it will benefit us too!)

Meet the woman entrepreneur whose startup 'mushroomed' digitally amid the pandemic

Buddha Khera village in Saharanpur district, Uttar Pradesh, may seem unlikely for a woman to dream of having the biggest bag manufacturing facility in the region. Still, Babi Kumari has proved that a woman can dream big.

The 35-year-old has always wanted to be financially independent and also support her family. Her mother is a homemaker, and her father, a farmer. Her physically disadvantaged brother manages a general store in the village.

After graduating from CCS University, Meerut, Babi pursued a three-month diploma course in retail under the Pradhan Mantri Kaushal Vikas Yojana (PMKVY). After working for a year in a private company in Haridwar and not seeing much career growth, she returned to her village.

“I occasionally worked as a beautician, providing door-to-door beauty services. However, I was inclined towards sewing that I had learned from my mother,” she says.

Soon, she started taking orders for stitching women’s clothes from the village itself. She also enrolled in a course that would teach her to stitch bags, kicking off her micro-enterprise, Fly Bags.

“Joining GIZ’s Project Her&Now has been a major gamechanger.,” she says, adding, “it gave me step-by-step guidance on how to run and scale the business, and also advice on various aspects of running a business from operations to delivery.”

She also received the first instalment of a loan she applied for, which will enable her to procure a motorised machine for quicker manufacturing of bags. Babi now employs three other women and is looking at bulk orders.

Her immediate aim is to also partner with social media and ecommerce platforms so that her products are available pan-India.

“I want Fly Bags to be the biggest manufacturer of quality bags in the region and be one of the most sought-after brands. I am exploring various options, such as collaborating with various wholesalers and retailers in Saharanpur who can procure the bags and give her large orders regularly), and am planning to add more products like sling bags backpacks, etc.,” Babi says.

These sisters launched their own athleisure line during the pandemic