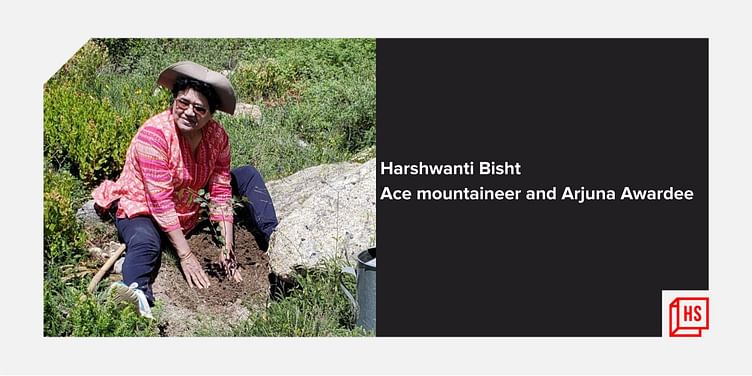 In a conversation with HerStory, ace mountaineer Harshwanti Bisht talks about her journey: her passion for mountaineering, becoming the first female president of the Indian Mountaineering Foundation, and ecological conservation.

For the first time in its 64-year history, the Indian Mountaineering Foundation will be led by legendary mountaineer Harshwanti Bisht. The first woman to be elected the president of the organisation, Harshwanti aims to do her bit for the mountains and mountaineering.

“The last time I contested [about six years ago], I lost by a couple of votes. This time I put more time and effort into convincing the officials that I am energetic and can do so much more towards the progress of mountaineering in our country. I had to make them believe that I could also organise opportunities for youngsters in this field and I think that worked in my favour,” Harshwanti tells HerStory.

She was elected to the post after winning 60 out of 107 votes. “I feel we are equally good as men in the field of mountaineering, so why can’t we hold the position?”

The coronavirus-imposed pandemic that has slowed India down over the last two years also led to a lull in the field of mountaineering, but Harshwanti is hopeful that there might be some opportunities in mountaineering in the coming months.

“Encouraging more and more women climbers in the field of mountaineering will be my top priority. We couldn’t do as much in the last two years as we had intended to but I aim to mobilise more funds and resources for the IMF to do more activities in the field of adventure,” she says.

Harshwanti was 21 years old when she began a basic course in mountaineering from Nehru Institute of Mountaineering (NIM) in 1977. Her father served in the army, but no one in her family was a mountaineer. But after completing her master’s degree, Harshwanti decided to pursue a PhD in mountain tourism.

“During the time when I was contemplating the mountaineering course, Colonel LP Sharma came to deliver a lecture on mountaineering. This sparked my interest and I decided to enroll for the basic course,” she says.

“My father was not happy, but I was firm about my decision and seeing my determination, they also relented,” she says, adding that getting permission from her parents to pursue mountaineering was a huge challenge “because in those days, there were hardly any women going for mountain climbing, especially in the mountains and small towns”.

“They never even dreamt of all these activities,” says the 67-year-old mountaineer who hails from Sukai village in Pauri district, Uttarakhand.

Mountaineering was supposed to be an activity that Harshwanti wanted to learn to supplement her PhD in mountain tourism, but over a period of time it took the front seat as her interest grew.

“I did my PhD but eventually I enjoyed mountaineering so much that I continued with it,” she says.

Things have changed a lot since then. She says there were few women pursuing mountaineering in her batch, “only 10-15 girls”, but today the number has gone up to 60-70 girls in one batch.

“Today, there is a peak in interest among girls as there is reservation as well. There is advance booking. The gear has also changed; we used to carry heavy gears, ordinary rucksacks and boots but today all of that has changed,” Harshwanti says.

A legend in the field of mountaineering, Harshwanti became the first woman to summit Nanda Devi, which at 7,816 metres is the highest mountain completely within Indian territory, along with two others in 1981. This achievement also earned her an Arjuna Award.

No mountain too high

In 1977, when Harshwanti was doing a basic course in mountaineering in Gangotri region, there were no direct buses from Uttarkashi to Gangotri.

“I was with a friend; we were carrying our stuff and were very tired. There was a steep climb and we were literally in tears. I asked myself why I came for this taxing course, and remembered my family questioning my decision,” she recalls.

“But when we reached Bhaironghati and took the bus from there to Gangotri, the tears vanished. After the course, all I could remember were the good times, the load we carried on our backs, bouldering, rock climbing, ice craft, etc.”

In 1981, when Harshwanti went for the Nanda Devi expedition, she experienced death very closely. “I was carrying the load from camp three to camp four. The sherpa was walking ahead of me and I was the last one to climb the rope. Suddenly, I lost control and was upside down on the rope. But we are taught the instinct of survival and I forced my body towards the anchor where the rope was fixed,” she recalls, adding that such expeditions bring along many challenging circumstances such as ice falls and big crevasses.

Harshwanti believes that overcoming obstacles in the mountains works well for her. “One gains so much confidence and feels like one can overcome any challenge in life,” says the 67-year-old mountaineer.

On how mountaineering works for girls during menstruation, Harshwanti says, “These are small obstacles in our lives while we’re doing anything in any field. Toilets can be a hindrance for men also, but whoever is determined to do mountaineering, manages it and plans it in a systematic way.”

Pandemic Heroes: Meet the Odisha mountaineer who turned vegetable vendor to help the elderly amid coronavirus

In 1984, Harshwanti went for a Mount Everest expedition. She couldn’t complete it successfully, which is when she decided to quit mountaineering and divert her focus towards academics again.

However, during her visit to Everest, she got a chance to observe Sir Edmund Hillary’s work in the Solu-Khumbu region where he opened schools, built hospitals, and worked to conserve the environment in that area. Sir Edmund is a New Zealand mountaineer who, along with Tenzing Norgay, was the first climber to summit Mount Everest in 1953.

“It inspired me to do something in my area. I realised that opening up schools and medical facilities would require a lot of funds that I didn’t have. The most accessible work for me was ecological conservation in the area that I had taken mountaineering training from in Gangotri-Gaumukh region.

“I went there and saw large-scale deforestation of birch trees and juniper bushes. Forests were being destroyed because of the influx of tourists and while it was benefiting locals, the ecology of the region bore the brunt,” Harshwanti says.

She started research work in the area in 1989 and in 1992 submitted a study on ecological concerns to the Ministry of Environment and Forest.

“The study centred on the impact of pilgrimage and tourism in the area. I concluded my study with the fact that economically we are gaining but ecologically we are losing. This is when I felt like I should do something for ecological conservation in the area.”

Harshwanti started working on the Bhojpatra plantation. “I raised the plant nursery of Bhojpatra at Chirbasa, which is at 11,700 ft altitude, 9 km from Gangotri on the way to Gaumukh, with saplings of indigenous trees including birch trees and juniper,” she says.

In 1996 when the saplings were ready for planting, she took permission from the forest department to do the plantation work in 2.5 hectares of land close to Bhojbasa.

“I planted around 2,500 saplings in the area. It was such a joyous feeling to know that around 60-70 percent of saplings survived successfully.”

She then carried out another plantation project, this time in 5.5 hectares with around 10,000 saplings of indigenous trees with similar survival success rate.

“Today, my trees are taller than me and this gives me utmost pleasure,” Harshwanti says.