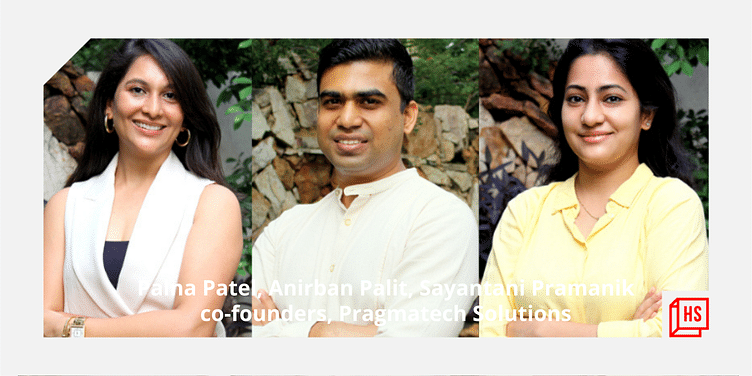 More than 60,000 women in India die every year due to cervical cancer, making it the second-highest type of cancer among women, according to a study published in Indian Journal of Medical Sciences in 2020.

Sayantani Pramanik, a PhD holder in biochemistry, says it is an extremely treatable form of cancer that takes 15 to 20 years to develop in the normal immune system. However, the indications of cancer development are as simple as irregular menstruation, back pain, white discharge, bleeding, and fatigue that many tend to ignore.

In India, most women hesitate to take the pap smear test – which is recommended once every three years for women aged 21 to 65 – due to lack of awareness, taboo surrounding reproductive health, judgmental gynaecologists, or simply prioritising family’s daily needs and wellbeing over their health.

By the time the symptoms become severe and women consult a doctor, the cancer has already developed in most cases.

Entrepreneur trio Anirban Palit, Palna Patel, and Sayantani Pramanik hope to solve this problem by making screening and early detection for cervical cancer accessible to women in both rural and urban areas through their femtech startup ﻿Pragmatech Solutions﻿.

Sayantani has worked in several biopharma companies, including Biocon and Lupin, in the research and drug development teams, looking at methods to detect various biomolecules.

“During my PhD, I realised that there is a lot of good work and research carried out in the academic world but most of them do not see the light of the day. So I wanted to work on something that will be beneficial and not just remain as published literature in one corner of the internet,” she tells HerStory.

When her husband Anirban Palit, who was working as a sales and marketing professional in the molecular diagnostics industry, also stated that cervical cancer has a high mortality rate in India, the duo decided to start up and work on a simple diagnostic solution.

They were joined by Palna Patel, a social worker and lawyer at Gujarat High court.  During her social work studies and volunteer field work, Palna had acted as a bridge between patients and the doctor where a lot of women in rural and slum areas used to come with symptoms of cervical cancer.

“So when my childhood friend Anirban approached, I jumped at the opportunity,” she says.

They have also onboarded Dr Bhagirath Modi, who has over four decades of experience as a gynaecologist in Vadodara, Gujarat.

Based in Vadodara, the startup aims to cater to women in urban and rural populations through two separate devices.

The Cervicheck self-sampling kit is targeted at urban and educated populations; it needs them to fill a form with details of their gynaecologist or general practitioner. The user will then need to insert a device in their body at home, submit it in a sample collection device, and get the result through their doctor.

This is priced at Rs 500 per kit, relatively cheaper than existing cervical cancer screening services that cost anywhere between Rs 1,000 and Rs 2,500.

“The window to detect and treat cervical cancer is huge as it begins with growth of abnormal cells and lesions, and takes at least a decade to develop into cancerous tumors. Cervicheck can detect across stages - from the presence of abnormal cells to the cancer,” Sayantani explains.

The self-sampling kit received approval from CDSCO Subject Expert Committee approval for pivotal clinical study and is now undergoing clinical trials, which will then be assessed by Central Drugs Standard Control Organisation (CDSCO) to obtain the licence to sell in the market.

The second product, CerviCheck Assay, is being developed for a rural audience. “It is a deeptech product that works like a pregnancy test and detects biomarkers of lesion presence. Any technician with minimum experience of handling samples will be able to work with this. We hope to partner with NGOs to conduct mass screening programmes,” she adds.

Challenges in the healthcare space

Started with an initial investment of Rs 15 lakh, the startup raised a seed fund of Rs 30 lakh from Venture Centre Pune and has won the BIRAC Seed Fund Investment.

While its products have not entered the market to make revenues, the startup has won several grants such as the SWISSNEX AIT 2020 organised by Swiss Consulate, Indus CSR Grant, and Stanford Seed Spark, among others. It has also signed an MOU with the Cancer Institute WIA, Adyar Chennai, for joint product development.

While entrepreneurship was new for all the co-founders, mentorship from the Venture Centre has helped in tackling any challenges.  COVID-19 has disrupted the startup’s timelines and led to delays in getting clearances from government bodies, but they are confident of the way ahead.

This women-led NGO works for empowerment of women and girls, with a special focus on adolescence