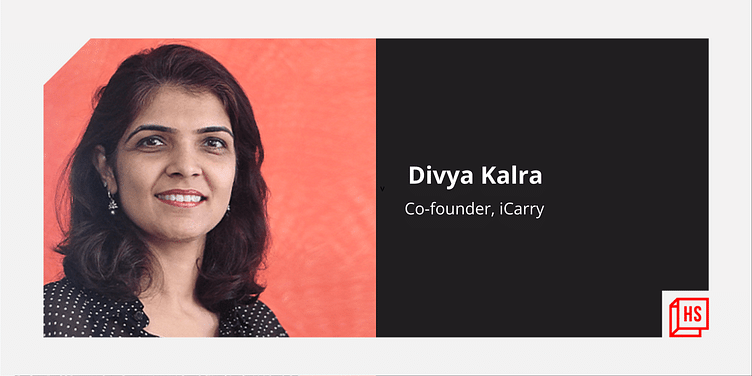 Based in Bengaluru, iCarry, a courier booking and aggregator platform, automates logistics service for small and medium businesses (SMBs) by connecting them with courier partners for domestic and international services.

Post completing her Masters in Computer Science from the University of North Carolina, Charlotte, for several years, Divya Kalra worked as an engineer in the US.

In 2008, she returned to India after her first daughter was born and soon after, Divya took the entrepreneurial plunge and quit her lucrative IT career.

“I realised I was running pillar to post to find healthy food and supplements for my family and was in touch with several manufacturers directly. I thought, why not bring them on a digital platform for everybody to access?” Divya shares with HerStory.

Thus, in 2012, Divya started ﻿ShopHealthy﻿ — a one-stop-shop for holistic health and wellness products that directly connects manufacturers and customers with no middlemen involved.

While running ShopHealthy, most manufacturers were notably happy with the platform’s logistics services that picked up products from anywhere in India, including remote regions.

“As an entrepreneur, we have experienced all the pain that goes in negotiating better rates with courier partners and getting the shipping process automated,” Divya says.

ShopHealthy set the stage for ﻿iCarry﻿— Divya’s second entrepreneurial venture — which enables courier and logistics services, especially for home-based and small and medium businesses (SMB), in 2019.

Based in Bengaluru, iCarry connects businesses with courier partners through its booking platform. The entrepreneur says it is a win-win situation for both parties as businesses save money on logistics, while courier companies get the volume from a single platform.

Divya highlights the logistics startup saw huge growth during the initial months of the COVID-19 outbreak.

In 2020, most ecommerce platforms were not operating due to various government restrictions on movement, and small businesses operating on platforms like Facebook and Instagram were having a hard time finding logistic solutions.

However, iCarry continued to offer its services at affordable rates. The startup onboarded a significant number of small sellers too.

The B2B courier booking platform could continue its service with government clearance as ShopHealthy, as a separate entity, was a key client of the logistics startup as it provided health and wellness essentials like homoeopathy products to boost immunity.

“iCarry, thus, kept running with ShopHealthy as the primary client. That is how we sustained during the pandemic, and even won the Times of India award for going on non-stop,” she shares.

Since, it has partnered with platforms, including ﻿Shopify﻿, WordPress, and Opencart, among others, as a logistic services provider for their sellers.

Now, serving more than 2,500 clients, iCarry’s courier partners include ﻿FedEx﻿, ﻿Blue Dart﻿, ﻿Delhivery﻿, ﻿Xpressbees﻿, ﻿Shadowfax﻿, Ekart, and ﻿Ecom Express﻿ for domestic shipping and Aramex and DHL for international services. As a courier aggregator, the startup earns revenue from commission on every shipment booked on the platform.

It operates with a small team of four people, including her Co-founder Manoj Shanbhag.

The road to entrepreneurship was not without challenges, especially since Divya switched from a full-time, cushy, corporate job to running her own company.

“We were used to all the perks like paid holidays, insurance, and so many benefits, and suddenly, you are on your own. And often working 9-5 seems more attractive than working 24X7,” she says.

Entrepreneurship is a lonely journey; one must figure out their work-life balance, Divya adds. As a first-generation entrepreneur, she says the journey was more difficult for her as she had to figure out everything on her own.

Running a tech platform, hiring became a major concern — getting good tech talent and retaining them is difficult, she says, as tech professionals get lured by lucrative salaries. Divya believes the scope for small and medium businesses (SMBs) in India promises an opportunity for iCarry’s growth.

India is home to 51 million SMBs, who account for 37 percent of the country’s $2 trillion GDP. Mordor Intelligence states India’s freight and logistics market is estimated to grow at a CAGR of about 4.37 percent each year till 2026. As per RedCore, RedSeer's early-stage research arm, India’s road logistic market is expected to become a $330 billion market by 2025.

This growth is empowered by the rise of the ecommerce sector in the country, and Divya believes iCarry is presently addressing a very small portion of this market and has a huge opportunity ahead.

Bootstrapped so far, the startup hopes to raise funding this year.

8 tips for working in a family business