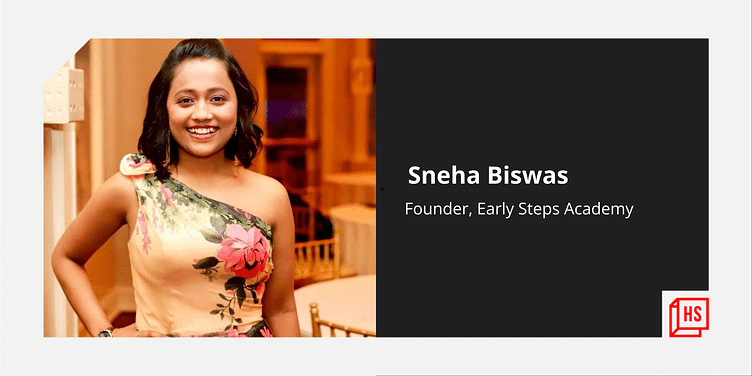 Entrepreneur Sneha Biswas says she feels obligated to the education sector because of “the power it holds in making significant cross-generational shifts”.

This is what led her to start Bengaluru-based edtech startup ﻿Early Steps Academy﻿, a case study method-based, online live learning platform that aims to help children between the ages of eight to 18 years master skills relevant for the 21st-century world.

“The case study method is known to have an impact in active learning and is implemented in the world’s top universities but nobody has done it for kids. We bring in innovation with a dedicated research and development team designing the case studies. It not only helps gain knowledge on respective subjects but also master the skills of thinking and talking,” Sneha tells HerStory.

The edtech startup now enables learning for more than 300 students across seven countries in the world.

Sneha, who moved to India early this year, says her mission was to make education relevant, useful, engaging, and fun for all school-going children because "the fact that a child is not confident in the real world when they have spent 14 years of life learning shows that there is a gap and little relevance in the real world”.

The case studies present open-ended real-world problems, which help students not just gain infinite real-world knowledge and confidence, but also connect core concepts to their lives catering to over 300 students.

What is the future of work looking like for women as we move into 2022?

Sneha’s journey made her aware of these problems on the ground.

Growing up in Jamshedpur, a Tier II city, and with limited exposure, Sneha and her sister spent a lot of time following the news and reading Tell Me Why magazines, thanks to their mother who insisted education went beyond the classroom and textbook learnings.

The Biswas sisters would take part in various regional and national debate competitions. Later, as an engineering student at IIT Kharagpur and working in different countries, Sneha noted that academic excellence alone could only take one “so far”.

"When I went to Kharagpur, I saw the difference for the first time. Everyone has taken the same test and process and is either as smart or smarter than you. So what you bring outside the academy makes the difference," she says.

After a stint with Teach For India, she worked with Schlumberger in the US, London, and East Africa. She was also an instructor with a Chinese edtech startup. When she later pursued further studies at Harvard Business School, Sneha became a faculty-nominated tutor in her second year.

“Working across different continents like India, Africa, US, UK and Europe, I saw that most people who succeeded professionally were not necessarily the only people who were technically sharp; it had a lot to do with how confident they were with whatever knowledge they had.”

After completing her MBA from Harvard Business School, she worked at Bain & Company before taking the entrepreneurial plunge to start Early Steps Academy in March 2021.

The entrepreneur says there could have been no better time than the pandemic to start-up in the education space as children across the world have gone through two years of learning loss.

“Learning happens when you travel and interact socially. To bring them back from this loss, now more than ever you need accelerated learning programmes focused on active discussion to catch up on what is happening in the real world,” she adds.

The pandemic has paved the way for massive growth of the edtech sector, with estimated addressable market size of $10.4 billion by 2025.

Early Steps Academy shares the market space with key players like BYJU’s and Unacademy as well as younger startups, and Sneha says the biggest validation comes from parents finding value in the startup’s pedagogy with 92 percent retention rate.

In November 2021, the edtech startup raised a seed round of $1.2 million from BEENEXT, Whiteboard Capital, and Taurus Ventures with participation from angels like Suhail Sumeer, Akash Saxena, and Varun Alagh. The startup is also among the 15 startups in the first cohort of Sequoia Spark, a $100,000 equity-free grant and mentorship programme.