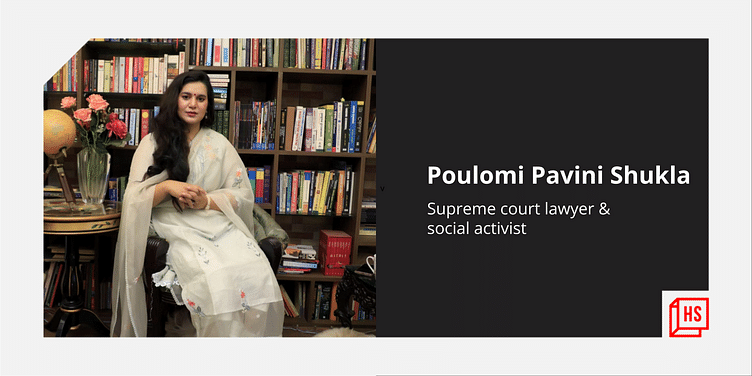 India has never surveyed orphan children in the country. Poulomi Pavini Shukla, author of Weakest on Earth: Orphans of India, has been fighting for the rights and reservation of orphaned children.

When Supreme Court lawyer Poulomi Pavini Shukla was pursuing law, she had decided to become a criminal lawyer. However, working in close quarters with orphan children led her on the path of social activism and she developed an interest in the Constitution and human rights.

When Poulomi was preparing for college, one of her friends, who lived at an orphanage and had done well in board exams, also wanted to go to college and study further.

“I thought there must be some scholarship or scheme but was shocked to learn there is nothing. Then I started looking in the private sector and found some individual donations available but no structured way for an orphan child in our country to go to college, which really disturbed me,”

Poulomi then admittedly went down a rabbit hole of researching provisions, schemes, and care infrastructure for orphans online, followed by visiting hundreds of orphanages across states to understand the ground reality.

The 29-year-old lawyer went on to co-author the book Weakest on Earth: Orphans of India (2015) and has been running a personal initiative and campaign of the same name in an attempt to fight India’s indifference to its orphan population.

Poulomi reiterates the fact that the Indian government does not have a count of orphaned children in the country. The only reliable data comes from NGOs and independent organisations like UNICEF which confirmed there are 29.6 million (2.96 crore) orphaned children in India, of which a mere 0.5 percent make it to an orphanage. One in five districts in India does not have an orphanage even though every district is mandated to have at least one orphanage.

She adds that the total government budget for orphans is less than Rs 2 per child for a day’s food, clothes, medicine, education, and everything else.

In 2015, Poulomi petitioned public interest litigation, laying out a slew of demands including standardised education, conducting an official survey on orphans, and setting reservations, among other things.

As Poulomi awaits a court hearing, she tells HerStory, “2021 is the year of the census that was delayed due to the COVID-19 pandemic, and the government needs to at least conduct a sample survey on orphans. Once they have the numbers, they will be better equipped to bring policies around it.”

She says these children are ‘orphaned in law’ with little acknowledgement of their existence by the government. The only law that mandates the need for an orphanage is the Juvenile Justice Act. “But the needs of orphan children and children in conflict with the law and their rehabilitation is vastly different.”

The Right to Education Act also does not consider orphaned children while it specifically lists the differently-abled and economically weak children. According to Poulomi, such negligence in the Constitution result in ignorance among government school officials who often would not admit orphan children.

Out of India’s 12 five year plans, she says five of them do not even mention the word ‘orphan’.

She believes such indifference towards orphans stems from these children not being a part of public discourse and politics. Poulomi has made this her personal mission. She believes that people are not entirely apathetic but need to be informed and sensitised of the problem faced by crores of children in India.

In fact, her PIL in 2015 resulted in the National Commission for Backward Classes recommending orphans to be considered part of OBCs, along with several states and Union Territories extending education reservations and financial aid to orphans.

The reality of India’s orphans

Most of India’s orphans are out in the streets or live in and around public places like railway stations. But the situation is grim even for those who find shelter in an orphanage.

“They are kicked out at the age of 18. There is an aftercare programme but it's very limited in scope. So they end up on the street with little education, no skills, and no money to fend for themselves. There have been many cases where children who are about to turn 18 are living in absolutely psychotic fear of what will happen next,” says Poulomi who was recognised by Forbes India in its 30 under 30 list last year.

In fact, a study conducted by Tata Institute of Social Sciences showed that 22 percent of orphaned children either die by suicide by the time they are 25 or get involved in drugs, prostitution, and petty crime.

There is no policy mandating certain years of education or skill development within orphanages.

“While some may get a teacher from a government school to teach all kinds of subjects, others offer vocational training in plumbing or carpentry. Some orphanages may choose to do nothing at all,” she adds.

Poulomi also notes that the number of girl orphans tends to be much higher than boys not because they are orphaned but more abandoned by family members at the time of birth. Getting the girls married by the time they turn 18 is a common solution among orphanages.

“It is a ‘solution’ they have thought of but unfortunately, in our country where domestic abuse is so high and patriarchy so entrenched, these girls will have no family. They are often subjected to worse conditions without independence than being on the streets,” Poulomi shares.

She is aware that social activism is a long journey. Publishing her book with Bloomsbury that captured the plight of Indian orphans only left her more invigorated.

“I thought everybody will read it and suddenly awaken everybody to the issue to act and bring change but obviously, nothing happened. And that's when I got even more motivated that this needs more active participation than just telling people data. I learnt it needed more conversation and involvement,” she adds.

But at the end of the day, it’s the well-being of orphans that matters the most.

“When you meet these children, they really inspire you because they are the physical embodiments of what you are trying to do…If you can get even one of them in a good school, or someone to sponsor their education after 18, it is a great feeling of accomplishment and the work makes sense,” Poulomi signs off.