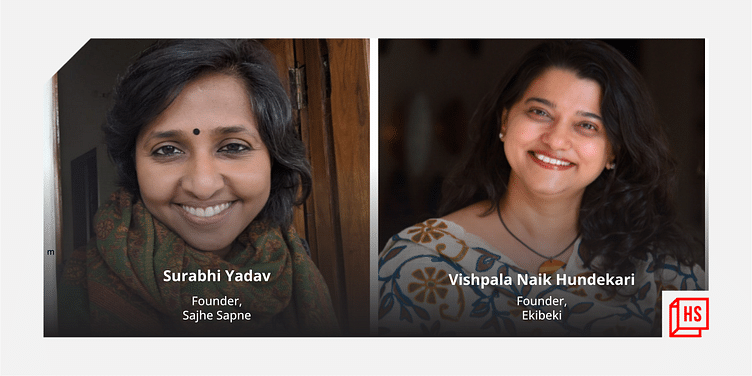 Surabhi Yadav of Sajhe Sapne and Vishpala Naik Hundekari of Ekibeki are part of the second cohort of Facebook Pragati, a CSR initiative of Facebook powered by The/Nudge Centre for Social Innovation. Their non-profits are empowering women to become financially independent.

Facebook Pragati is a CSR initiative of Facebook powered by The/Nudge Centre for Social Innovation to incubate and accelerate early stage women-led non-profits that are working in the areas of women entrepreneurship and to drive awareness and adoption of technology among women in India.

Women entrepreneurs who are a part of Facebook Pragati by The/Nudge Foundation are solving problems faced by Indian women in diverse areas, most notably in economic empowerment and digital inclusion.

“We look for exceptional non-profit founders who are deeply committed to the cause, and have demonstrated capability to lead from the ground up, and effect needle moving change, at large scale. Our intense selection process includes a rigorous review of their model and business plan, several rounds of interviews culminating in a deep interaction with CSI Partners advising the program,” says Sudha Srinivasan, CEO, The/Nudge Centre for Social Innovation.

The programme is designed to give early-stage founders and their core team members the momentum they need to achieve their audacious goals. The three core offerings of the program are -- a) mentorship, b) grants and fund-raising, and c) organisational capacity building.

The seed grant serves the need for innovation capital to develop and refine their model to achieve meaningful impact.

In the first cohort of the Facebook Pragati, four organisations were selected through a rigorous five round selection process. They include Tech4Good; Shakti, The Empathy Project; Skilled Samaritan Foundation; and India and Bharat Together. In the latest cohort, it had onboarded FMCH India, Esher, Ekibeki, Sajhe Sapne, Tisser Artisan India, and Svatanya Foundation.

Under the programme, each organisation received a grant of up to Rs 50 lakh to scale their work and drive impact.

Madhu Singh Sirohi, Head of Policy Programs and Outreach, India, at Meta (Facebook), explains, “Today, more than 800 million users have access to the internet in the country. Of those, only 33 percent are women. Our efforts are concerted in bridging this gender divide, which exists on the internet. We are not only making it easier for more women to have access to the internet, but we are also launching initiatives that give a boost to bringing more women entrepreneurs and women-led businesses.”

HerStory spoke to two women entrepreneurs who are part of the Facebook Pragati Program, powered by Nudge. Here are their stories of impact.

Surabhi Yadav started ﻿Sajhe Sapne﻿ during the lockdown in August 2020 when she discovered rural women dropping out of education for good, higher than usual. Based in Kandbari, a village in Himachal Pradesh, she wanted women in villages be known for their potential and not their pain.

Surabhi says she is privileged to have lived in four distinct worlds -- a world of her home, Khargone, where the purpose of education was to flourish together; a world of her parents’ villages in Bundelkhand, Madhopura and Barausagar, with richness of being a community; a world of IIT Delhi where everything seemed possible; and that world of UC Berkeley where sense of justice seemed the way of life.

“Irrespective of where I lived, I have met women who are constantly creating something - rangolis, food menus for the families, plans for managing multiple different tasks at home and at work (be it a farm or an organisation), sweaters, relationships, etc. And yet, society at large has convinced them they are not enough. I have also met women in villages - cousins, aunts, friends, and strangers - who want to become police women, singers, business owners, teachers, someone known for their work in society. And yet, systemically there are barriers impeding that inkling to ‘become something’ a reality,” Surabhi says.

Sajhe Sapne offers end-to-end support to young rural women to launch and grow their careers in modern day jobs. We had a successful pilot of two career tracks: Management and Rural Development and Primary Math Educator. The Math Educator programme is co-led by Aavishkaar (Palampur) and Ashvattha Learning Communities. We are about to launch a new course in Web Development For Social Good.

The support begins from identifying and mobilising Sapnewaalis, women in villages who have a dream to ‘do something’ and are ready to act on it, but do not have means to do it.

This is followed by offering learning and skilling in nine months long residential and non-residential courses in centres called Sapna Centers in villages.

The eligibility criteria is 18 years of age and above, rural women, from communities where means of education are hindered due to caste, class, gender, and geography.

In the first year, Sajhe Sapne had 28 women from 16 different villages in Bihar, Uttar Pradesh, Madhya Pradesh, Jharkhand, Himachal Pradesh, and Rajasthan, of which, 24 finished the programme. All of them got job offers, 95 percent successfully joined them, two decided to let go of the one they got and continue looking for better ones.

Surabhi’s short-term plans include launching a new career track, making learning content more expansive and launch a cohort with young women from most underserved castes and classes in remote geographies.

Her long-term plans are to open a chain of Sapna centres in villages, launch at least 10 more new courses which cater to career growth as well as strengthens rural economy such as FPO management, horticulture, elderly caregiving etc and to support ITIs and government colleges that serve women in villages with curriculum and pedagogy reform.

As an architect and furniture designer, Vishpala Naik used to deal with the educated urban clients who would go all the way to Europe and buy the paintings or even prints of famous painters for their homes, but wouldn’t buy anything Indian.

“Most people were unaware of the crafts we have in our country. Along with the awareness, there is no love or respect for the local crafts. Artisans engaged in traditional crafts are struggling to survive. Many move to other occupations/migrate to cities where they lack dignity and are detached from their families and their society. To solve this problem, I launched ﻿Ekibeki﻿ in 2018 in Mumbai,” she says.

Ekibeki’s mission is to help livelihood generation, with a focus on women and youth artisans by developing producer owned groups making sustainable largely handmade products and an ecosystem around them which makes them self-sustaining.

It provides the following services to this end:

“As an architect I was already working with a few artisan communities. Initially, we started with design and skill development for these artisans. The first cluster we started with was Copper Enamelling in Alibag, Maharashtra. This number of artisans has been continuously decreasing over the years and immediate intervention was required. We also started work with Chitrakathi in Kudal, Maharashtra, where again only two families are left. Gond from Bhopal, MP, and Kalighat/ West Bengal Pattachitra are few more art forms we started work with,” she explains.

Ekibeki works with copper enamel and creates home decor and jewellery pieces as well. It also works with several other narrative crafts like Chitrakathi, Gond, Pattachitra, and create stationery. Beyond this, it has identified many artisans from Rogan, cut brass, lippan, Bandhani from Gujarat, Chikenkari, aari embroidery from UP, Fulkari, Sikki grass from Punjab for interiors for Starbucks

On the impact, Vishpala says, “The artisans are seeing an overall increase in 20 to 60 percent income. They don’t have to go out looking for customers as Ekibeki is getting the customers to them.”

Ekibeki has started training 300 women in Kendrapara, Odisha, for Golden Grass. This is a joint venture with Kadam, another social enterprise working with women at the grassroots. It has also signed an MoU with Maharashtra Bamboo Development Board where we its helping creating FPOs in Alibag where it is already working with copper enamel artisans.