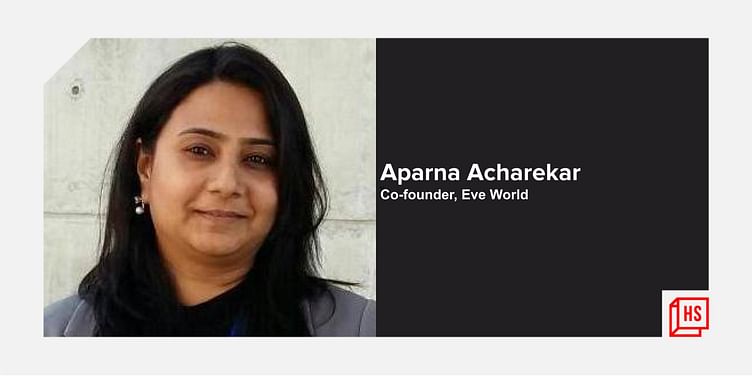 Aparna Acharekar teamed up with Tarun Katial to launch Eve World, an online social platform exclusively dedicated to women. It aims to function as a safe space, and help women find identity, independence, and inclusion.

After a two-decade-long career and switching from being a journalist to content strategy, Mumbai-based Aparna Acharekar decided to try entrepreneurship.

In October 2021, she joined hands with Tarun Katial to co-found ﻿Eve World﻿, a Web3-based social platform exclusively for women. Due for a public launch at the end of the first quarter of this year, it aims to provide a safe space for women online to express themselves freely. Users will be able to log in to the app through facial recognition and multifactor authentication.

“These words may sound fancy but at a very basic level, women seek these three factors for themselves. We seek to build our own identity, devoid of which family we belong to and who we intend to marry. Secondly, it’s no surprise that women want independence to make their own decisions and freedom to choose what they want in their lives. Lastly, with the world around us seeming predominantly male, inclusion is a topmost priority in current times. Often, our own inhibitions stop us from going out of our way and reclaiming our space in society,” she says.

The platform features multi-format content and communities around women-centric issues, along with elements like social commerce, ecommerce, and brand stores. The app will be accessible globally.

Currently, Eve World is onboarding community content creators, who are subject matter experts, and key opinion leaders who will form communities on the platform. These experts will act as community leaders and engage with the audience.

“Women wanting to get a headstart in entrepreneurship, upskilling, learning about different topics that matter to them and much more will get mentorship on the platform,” she says.

While the platform is yet to be launched for public use, it has already acquired femtech firm Femcy for an undisclosed sum in December last year. Nandhini Gopal, Founder of Femcy, has joined the team of Eve World to spearhead the health and hygiene vertical.

The platform intends to normalise tabooed conversations around sexuality and women’s bodies.

“We recently constituted a community advisory board with nine prominent women who come from different walks of life. These include Sonali Bendre, Dr Anjali Chhabria, Ashwini Iyer Tiwari, Bhawani Iyer, Anupriya Acharya, Apurva Purohit, and Radhika Gupta among others. We’re working with these women to build a responsible social media platform,” Aparna says.

The founder adds that we are in the midst of a churning where we are moving towards “a woke world of smashing patriarchy, breaking beauty standards, and normalising tabooed issues like menstruation, mental health etc”.

“At such a time when women and non-binary folks are constantly trolled online for expressing themselves and making free choices, it is important for them to have a safe space so they can come into their own from a young age as opposed to having traumatic experiences that last a lifetime,” she says.

Aparna says social media has been shown to have adverse effects on teenage girls by acting as a catalyst in setting and publicising wrong beauty standards. “So, creating a responsible social media platform, which picks early signs of mental health issues, and helps a person rather than sending them down a rabbit hole is what we aim to build.”

What encouraged Aparna to be a part of Eve World was the idea of having a mission of creating value for herself and other women at a much larger scale.

“Tarun and I were brainstorming and we came up with an idea of an exclusive destination for women that fosters the idea of sisterhood. One where women can talk freely without judgement. Today, social media is filled with women getting trolled, left, right, and centre. We are slut-shamed right from the word go so we’re on a journey of creating a platform that empowers women from within so that we are ready to face real-life challenges with gusto,” she shares.

Aparna says the platform will also provide inclusion and a safe space to the LGBTQ+ community.

The startup recently launched the ‘Eve Creator World Program’, an invite-only programme that aims at partnering with the next generation of content creators, based on their ideas, purpose and expertise. As a first, women creators will be shortlisted and offered an invitation upon evaluation of their content on the basis of impact and purpose, not followers. They will also have an opportunity to tap into funds to further enable their journey on the platform.

The Eve Creator World Program endeavours to put creators in the drivers' seat for Web 3.0. The team aims to offer diverse monetisation models that will allow creators to build social interactions and design a community. The idea is to kickstart a cycle of opportunities and monetisation models for women creators.

While social media giants like Facebook run several communities that talk about creating a safe space for women, social media has time and again reminded us that gender bias in cyberbullying and harassment is real.

Sandhya Cherian conquers frontiers in the face of personal loss