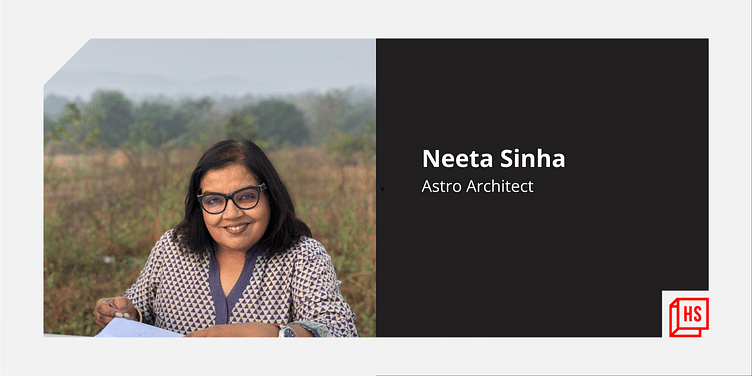 For two decades now, Astro Architect Neeta Sinha has been providing consultations to film director Sanjay Leela Bhansali to balance the energy pockets on his film sets for a smooth filmmaking process. Read on how Neeta became the most sought after Astro consultant for Bollywood’s bigwigs.

Neeta Sinha was like any normal woman taking care of her husband and her son.

On one Sunday in the late 80s, when her son fell sick and all the clinics were shut in her locality in Mumbai, she took him to a homoeopathy clinic run by Dr LN Kusuma, although she did not believe in the science.

“I was sceptical whether his medicines will be effective for my son, but they worked and in a real good time. From that day onwards, I became his regular patient,” Neeta recalls in a conversation with HerStory.

While Neeta didn’t have faith in these subjects, one day, when her husband lost his job, she approached him and all his predictions came true. Since then, Neeta started working with him and he became her guru (teacher).

“I wanted to differentiate the science I practise from the regular Vastu or Feng Shui tag that has been attached to it. I call my science a modern science because its foundation and principles are based on the ancient science of Vastu, Feng Shui, and Astrology. It really is a solution for modern architecture,” adds Neeta.

In fact, since Devdas in 2002, she has been the secret behind the success of some of Sanjay Leela Bhansali’s timeless films.

Neeta recalls several ‘freak’ accidents happening on the sets of Devdas when actor Kirron Kher suggested the renowned director bring Neeta on board to balance their film sets.

Neeta claims, subsequently, the film shooting was completed without a single mishap after they consulted her.

Since then, Bhansali Productions has depended on Neeta’s expertise to balance the energies of all its film sets — from Ram Leela to its latest release Gangubai Kathiawadi.

In fact, the production team mentioned her in Padmavat’s end credits as the Vastu Consultant.

For Gangubai Kathiawadi, Neeta toned up the red colour to increase the warmth and passion the cast and crew brought to the film.

She also asked the team to incorporate mirrors and drooping plants to ensure the positivity and creativity flowed in with no limitations.

From a sales exec to an entrepreneur, how Ayushi Misra made it big in the event planning space

Her suggestions didn’t just help align the chakras of the set but also proved to be gorgeous additions to the production design. She also helped assign entrances to the actors on set to make sure their talent was enhanced and encouraged.

“The magnitude of his [Sanjay Leela Bhansali] sets and the detailing has always awed me. I see the sets at their very nascent stage to help balance the energies. My work focuses on making sure the production house does not face any issues while filming the movie and it goes off smoothly,” she explains.

Neeta continues, “When I visit a factory, I make sure the production process runs smoothly and efficiently, so you end up saving precious time, money, and energy.”

While Neeta’s connection with the film industry is diverse, it was Jayantilal Gada from Pen Entertainment who first showed his confidence in her work, and the journey of a successful career in Astro architecture began for Neeta.

What her work entails?

Neeta is joined by her husband who quit his job to help with her work, considering her extensive clientele.

“My husband supported and came along with me to all the places I had to visit. He helped me by taking measurements of the place while I did the calculations. Once my client list began to grow, he let go of his service, and since then, we both have been practising this full time,” she recollects.

Describing her work, Neeta explains, “Typically, when I visit any house, office, or factory, I always tell my clients not to tell me their problems. I do it because I don’t want to get biased regarding my calculations and analysis of the space.”

“Once done with taking measurements and creating a mental horoscope of the space, I tell my clients what kind of problems they might be facing from that house or business place, which turns out to be exactly what they wanted to share in the first place. This establishes trust between my clients and the science, helping them carry out the recommended solutions with full faith,” she adds.

She says her solutions are not structural changes but simple things like adding mirrors, colours, and plants, which have an amazing effect on her clients’ lives.

The same house that was not favourable for them, according to Vastu, starts giving out positive results within a fortnight or a month.

“Although its foundation and principles are based on the ancient science of Vastu, Feng Shui, and Astrology, it really is a solution for modern architecture,” Neeta tells HerStory.

In the beginning, when Neeta was assisting her guru, they looked up a simple question — “When the Vastu or layout of all the flats in a high rise building is the same, why do they give different results to different individuals?”

“What we discovered was that every house has a horoscope with different energy pockets. The name of an individual or company and the kind of work they do directly affect these energy pockets, which, in turn, affect one’s life and growth. Once we made this discovery after researching numerous houses, we began practising it,” she says.

As a word of advice for women who take up the wellness route, Neeta shares, “Always work with the best of intentions in your heart and it will come back to you tenfold in the form of blessings and luck.”