Celebrating the fire power of Durga Shakti Nagpal, a bold bureaucrat and now a heartwarming author 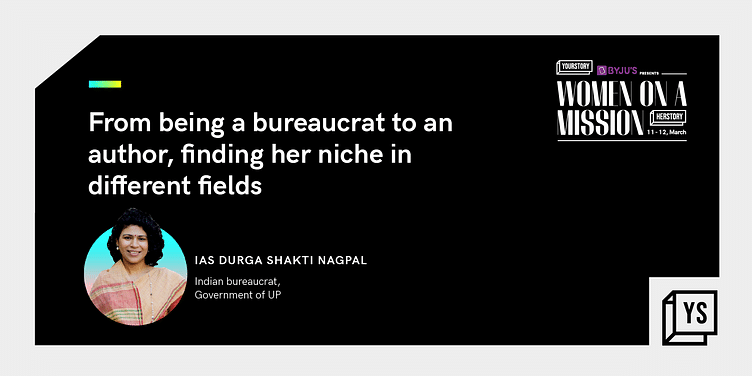 Speaking at HerStory’s Women on a Mission Summit 2022, Durga Shakti Nagpal — bureaucrat, mother of two, and now an author — shared inspiring chapters from her life, filled with courage and heart, adding how women should value their own strength, health and happiness.

While COVID-19 might have disrupted the world as we knew it during the last two years, “a pandemic is always there in a woman’s life”, said Durga Shakti Nagpal.

The bureaucrat, mother of two, and now an author was speaking at HerStory’s Women on a Mission Summit 2022, during the International Women’s Day week.

The pandemic has only increased the workload of women manifold, with several of them having to perform domestic labour including cooking and teaching children in the absence of domestic help alongside working from home in the case of some, reminded Durga, a 2010 batch Indian Administrative Service (IAS) officer of Uttar Pradesh cadre, who recently turned author with her book Grow Your Baby Not Your Weight.

She started writing the book with the whacky title during the last trimester of her second pregnancy. The thought of writing the book dawned upon her during the second trimester. “I felt that only my baby was growing — that the baby inside me was growing — and more or less my entire body was otherwise quite fit. I did not gain weight in other parts of my body, which conventionally a pregnant woman does, and I thought that’s because of my active lifestyle,” shared Durga.

She gives credit to her healthy diet and workout regime including a number of pregnancy-friendly exercises during the entire nine-month span of both her pregnancies.

The idea was to write something of value, to have a positive impact on her readers through a lighthearted take on the journey of motherhood. The book that also features some easy recipes for expecting mothers is dotted with humorous anecdotes.

The power of strength and solidarity

Any message to mothers or women in general?

"We are born multitaskers, from raising children to running households to earning livelihoods, we are a one-woman army running the entire show," reminded Durga.

For women, building family support, community support and an overall empathetic support system is critical to ease their burden. "Having a supportive family and workplace that encourages you to do what you want to do in life is important," reminded Durga.

However, Durga was quick to add that in case a woman lacks the support of family for whatever reason, she is a powerhouse on her own. "A woman is innately born with perfection — whether it is in giving birth or multitasking — and if we can identify those strengths, she can chart her own journey of empowerment. She has it inside her to make it big, pursue her dreams," she surmised.

How does Durga balance her professional and personal life? "In my case, I love my career, I love being a mother, and I love myself. And I don’t compromise on any aspect of my life and that makes my journey smooth," shared Durga, who is now awaiting the release of her biopic by the end of this year.

Women music artists took their rightful due on their own: Shilpa Rao

In 2013, the then sub-divisional magistrate of Noida, Durga first made it to front-page national news for raiding sand mines in Uttar Pradesh.

Recalling her efforts in curbing the illegal sand scam and the resultant menace, Durga recalled how she and her team would go on raids in the dead and dark of night, at 2 pm. It was something that they looked forward to, and they would at least arrest a dozen people and seize eight to 10 trucks, apart from recovering royalty to the tune of crores in a span of two weeks, a record-setting figure. At the end of this bold and courageous campaign, Durga who never thought of her job as a 'woman's job and hence more challenging, shared how she would be thanked by the locals, and how support poured in from all quarters.

The biopic is going to trace her inspirational life story, cutting into the sand mining episode and cover the facets of her facing threats and even being physically attacked.

On a parting note, Durga didn't forget to mention how she has been closely following the journey of women entrepreneurs and the rise of women leadership. "The more she plans the better it will be for a woman to take her career to a different level. Secondly, it's important to have a strong team whom you can delegate work. The credit of your success should go to your team — that’s the true mark of a leader,” she signed off.

A shout out to the sponsors of Women on Mission Summit 2022, an Initiative by HerStory, by YourStory -