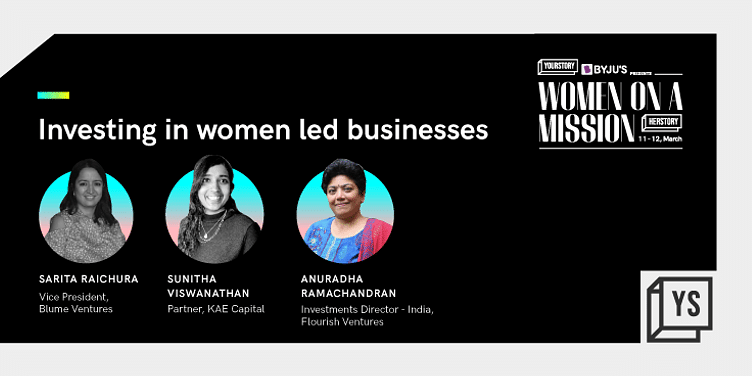 At the Herstory Women On a Mission summit, women representing the venture capital (VC) world spoke on the fast-maturing Indian startup ecosystem and trends that may follow the pandemic-induced digital boom. Also get a peek into the investors’ checklist when looking to back startups and founders.

The Indian startup ecosystem has fast evolved to attract investments from both global and domestic funds. Between January and September, 2021, the ecosystem received a funding value of $23 billion, producing 33 unicorns in just nine months. Others like ﻿Nykaa﻿, ﻿Zomato﻿, ﻿Freshworks﻿, and ﻿PolicyBazaar﻿ successfully made it to the bourses.

Sunitha Viswanathan, Partner at ﻿Kae Capital﻿believes it is a very good reflection of the Indian ecosystem coming of age, especially as large foreign funds, who usually shy away from the Indian startup ecosystem citing reasons such as lack of liquidity, are shelling out funds.

“We saw almost 100 deals where more than $100 million went into such companies. That is a non-trivial task and something that clearly shows strong confidence in the Indian ecosystem,” Sunitha said, speaking at a panel discussion at the HerStory Women On a Mission summit.

But how do such milestones determine the way forward for the startup ecosystem?

According to Sarita Raichura, Vice President, ﻿Blume Ventures﻿, “We do expect the upswing of 2021 to subside as an investor, but the fundamentals remain strong. Quality of the founders is even getting better because they are coming back as second time founders.”

Anuradha Ramachandran, Investment Director, India Flourish Ventures highlighted the impact of the digital boom due to the pandemic, stating, “Suddenly, people are beginning to find the convenience of using mobile phones to do everyday tasks. Once they have seen the convenience, people tend to repeat. This is showing up across multiple startups sectors...ecommerce has gone beyond the urban cities for the first time.” She added that sectors like logistics and B2B are coming up in a big way.

From a dreamer to becoming the world's youngest commander to fly Boeing 777, the story of Captain Anny Divya

As the startup ecosystem grows across sectors, the venture capitalist investors shared an insight into their checklist when fielding through hordes of entrepreneurs and startups to back up.

Sunita emphasised that founder-market fit is also a key concern. She said, "Some problems need a founder who either has worked in the space previously or understands very deep consumer insights as to why this particular problem needs to be solved and what is the way to go about it. Opportunistically, you may land at a problem but have no bearings to go ahead," she said.

Sunita added that founders must also be open and agile enough to pivot because nine out of 10 startups end up pivoting in their entrepreneurial journey.

Anuradha stated that positive unit economics is considered a big need that India Flourish Ventures sticks to an extent "that I sometimes think is a problem."

"We are in the business of funding a business. We are not in the business of only funding change. Therefore, it becomes important for us that something becomes sustainable. It might take a while to get there but if we don't have the understanding in terms of the drivers which make for positive unit economics, it is going to be very difficult to back founders," she explained.

Anuradha believes that the size of the market is equally important. Although the Indian population of 1.3 billion people will always appear as a big market, she said the key lies in the ability to narrow down what one is trying to address.

"That articulation and clarity of saying this is exactly how I'm getting there - what is addressable as a market and how are you actually getting there - is something we look for," she said.

Addressing women out there, Sunitha urged them not to hesitate in joining the investor’s table. “There are a lot of funds, looking for women investors across levels. Don't be afraid of reaching out. Cold calling, outreaching to funds is not something to shy away from – men who are much less qualified and have lesser talent and skills are able to do so. It is just a question of serendipity happening,” she advised.