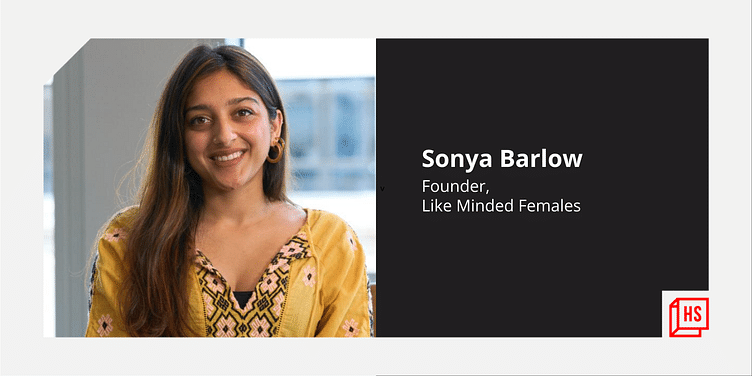 Sonya Barlow is the founder of Like Minded Females (LMF Network CIC), a not-for-profit social enterprise focused on enabling and educating women and minoritised individuals in tech, business, and digital sectors.

At the start of 2020, when the COVID-19 pandemic struck, Sonya Barlow found herself without an income.

The London-based award-winning diversity champion and author had started ﻿Like Minded Females﻿ Network (LMF) in 2018 as a small initiative to bring together women from diverse backgrounds to have career and confidence conversations during brunch meetings.

The first LMF brunch that Sonya organised turned out to be an epic failure. No one attended.

Undeterred, she decided to learn from that failure.

“Get great at failing. Being an entrepreneur, running a business or starting anything new will come with failures and setbacks. Seeing failure as a temporary disruptor, and as an opportunity to grow, is liberating. It gives you the freedom to ask yourself, 'Why not?' Try, fail, learn and try again,” she recommends.

Sonya’s parents moved from Pakistan to the UK when she was four years old. The idea of temporary disruption, she says, came from her mother, who herself has faced adversity as a brown women, in South Asia as well as the Western World.

“Her thinking has always encouraged me to be fluid, flexible, and open to any opportunity, taking every obstacle as another setback to grow,” she says.

The pandemic notwithstanding, Sonia has facilitated over 200 workshops and has single-handedly grown the LMF Network to a global social community of over 50,000 women.

LMF helps educate and elevate underrepresented individuals in the workplace by offering mentoring schemes, community forums, and corporate advisory. It is also focuses on the challenges women face in negotiating the workplace by bridging the skills gap and creating inclusive cultures.

Always hustling for her place

As a South Asian woman growing up in the UK, Sonya remembers being dismissed, gaslighted, and even fired from jobs.

“I was told that ‘girls like me’ don't achieve ‘those’ things at school, only to experience a similar sentiment in the technology industry despite working hard and hustling for my place at the table. During my first years in the industry, I felt alone and had no sense of belonging. I had no social media presence, and the events in London were out of my budget. I didn't have what one would call work friends, and my managers weren't what one might call role models. So, rather than waiting around, I decided what's the worst that can happen if I try to do something - Welcome, Like-Minded Females (LMF) Network,” she says.

During her work in the corporate world, Sonya realised that the gap was that companies wanted to be inclusive and build community but didn’t know how. And that women often were placed in roles to lead these initiatives internally, as a side of the desk, but either didn’t achieve the community for themselves or weren’t appreciated for their efforts.

She claims to have launched the largest mentoring programme in the UK with a pilot last year, mentoring 1,000 people with a 98 percent success rate. As a result, mentors and mentees were achieving new jobs, salary increases of £25K, and launching new businesses.

“Over the last three years, we have worked with over 100 partner organisations and embraced 50K+ in social following, despite being hacked twice. Everything is online, ensuring it’s accessible and inclusive - with limited events in person.

"We also are launching an ambassador programme so that those from around the world can get involved, as we currently service 84 different markets including India, Pakistan the UK, Canada, and Mexico This only means that we’ve kept going even when we faced conditions outside of our control. Our community have supported us and companies acknowledge the great work that we are doing,” she says.

Enabling women at the workplace

The LMF mentoring programme is a comprehensive three-month multimedia programme to provide supportive relationships, opportunities, and tools to achieve one's career goals. It covers topics from goal setting, personal branding to CV and interview skills, public speaking, digital, entrepreneurship, and in 2022 a focus on #BreakTheBias. Since 2018, the organisation has worked hard to enable women into the workplace.

The business model is served under two arms.

Sonya explains. “We have a social enterprise arm, which is a not-for-profit supporting women and non-binary folk through mentoring, life skills workshops, and community forums. All of our services are either free or accessible, ensuring that professionals can afford the initiatives and this isn’t a barrier to access. From June 2022, we are launching our new membership model, which will cost around £60 per year for unlimited membership and resources for our members, which is £5 a month - cheaper than an Amazon subscription and far better for your career.”

The commercial arm brings in revenue from companies who invest in ED&I and business services, such as training, strategy and action plans. LMF also reinvests its profits into the network, to cover software, staff and business as usual costs.

“Everything we do is underlined by social entrepreneurship, meaning that there is a bigger purpose towards bettering the world around us. In addition to this, we have the book Unprepared to Entrepreneur, which is available on all forums to buy. Any profits are again invested into LMF Network,” she adds.

Sonya has also been named a LinkedIn Changemaker for Gender Diversity and LinkedIn Top Voice 2022. She has been recognised as the Most Influential Women in Tech UK, Women in Software Changemaker, Top 50 BAME Entrepreneurs under 50, and Marie Claire Future Shaper.

So far, Sonya has self-funded the initiative alongside donations, partnership sponsorships, and community contributions. This year, she is planning to move to a membership model to ensure sustainability and long-term growth.