Inside the Window of Innovation in the Web3 World 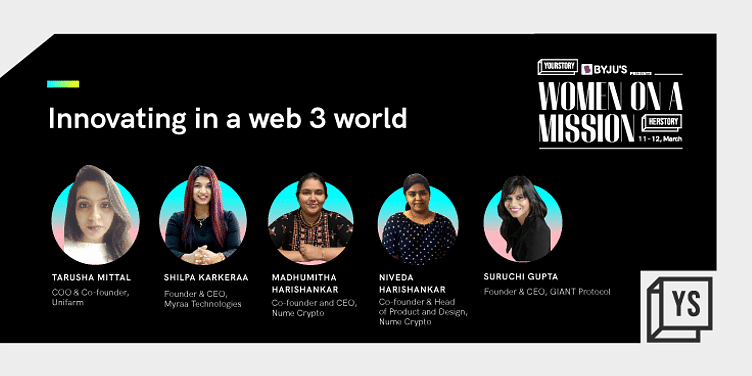 Leading voices in the Web3.0 world — Tarusha Mittal, Shilpa Karkeraa, Madhumita Harishankar, Niveda Harishankar, and Suruchi Gupta — women who are at the forefront of the evolution of new-age tokenomics and content ownership, engaged in a fruitful dialogue at HerStory’s Women on a Mission.

With innovation being the buzzword in the evolving space of Web3.0, the energy is being sustained by new products, enterprises and applications across segments and sectors. As transparency, efficiency and immutability gain more currency, how is the exciting new space of Web3 poised to provide opportunity for innovation?

Tarusha highlighted how Web3 is all about community building, which also means that despite the existing gender disparity in the technology domain, if you are able to bring the right skills and value to the table, nobody's really going to talk about gender. "You can be an anonymous developer, an anonymous designer, or you might be a part of some team, which might be anonymous in nature, and is into building something for Web3 because it's so community-driven," explained Tarusha. She cited the example of creating software as a service (SaaS) products, and its inherent community aspect, and how it offers women a slight advantage. In case someone wants they can create great things under the garb of anonymity — perhaps a bit of JK Rowling style — not directly being anonymous, but sort of creating a unique way to get your word out there.

Niveda delved into the content evolution trajectory through Web1, Web2 and Web3, pointing out how if Web1 was all about curated content, Web2 pioneered user-generated content where users don't get compensated for the content that they create. And then comes Web3 championing users’ own content, flipping the ownership model altogether. So, now users can monetise their content, whether it's music or art, and this is something which is shaping up in the space courtesy the breakthrough of non-fungible tokens (NFTs).

Shilpa agreed. “Web3 brings a parallel decentralised world, where tokenisation of processes, actions, and data, is going to enable people with ownership of data and actions. Web1 and Web2 have laid a foundation for the audience to want Web3. I think the opinions and votes for decision-making will count more now, which is where the infrastructure of Web3 is stepping in,” she said.

Suruchi too highlighted the potential and power of the “ownership economy”. She explained how Web1 was mostly about reading content and how Web2 enhanced that, and now finally the evolving era of Web3 is ushering in an era of reading, writing and owning.

The Web2 era saw the birth of the global tech behemoths, Apple and Google, and the like. “And it is us consumers that actually made them these behemoth companies, but then as consumers, do we get any upside for that? Do we get to own a piece of that? No. And so, the Web3 era is actually turning it on its head, where we are not only consuming and also supporting these economies, or rather companies, but at the same time, owning a piece of it,” Shilpa explained, adding that consumes are now being increasingly invested with the agency and bargaining power to bring about the change.

Madhumita agreed with the others, adding that this change implies instead of giving power to the platform, you're benefiting from using the platform. And that’s attractive to the viewer/user who revels in the fact that they have ownership of their own content and will not be subjected to the arbitrary policies of the platforms. And this explains the growing interest in the sector.

When asked what kind of a surface environment Web3 offers to creators, Shilpa said that the best part is it has evolved to this point of offering better ownership and better decision-making prospects to creators courtesy the spurt in the open source community. Which means today you can go online and find out different platforms and also contribute to them. The key focus is transparency. “That kind of openness has actually enabled the design of the software to get better. A lot of open source platforms, and also the cryptocurrencies that have come up, are out there transparently. So, you can see the source code on GitHub, you can see the tools that are there, and integration to these systems are out there open,” Shilpa added.

Talking about the big opportunity and big women’s opportunity in the space augmented by crypto wallets, resource networks, and new-age applications, Madhumita shared that this is as big as it gets. She cited the example of fintech, which was earlier controlled by a very few players but with bitcoin pitted against banks the revolution happened. Now, we're talking about decentralising networks, we're talking about decentralising any organisation with one centralised player owning the infrastructure and the content. A lot of the research actually started with Web2 itself with a few startups taking a shot at crowdsourcing for instance, but what was lacking was the incentive layer, and it couldn't take off without a very strong incentive structure in place, she explained adding how the biggest power today is to create tokens. “We know how to create tokens, we know how to monetise, to do very small micro payments; we know how to value these things in our trade tokens. And that's going to make all the difference,” said Madhumita, talking about the disruption that this tech can have in various sectors, not just in the form of software, but even in the form of hardware infrastructure.

In terms of women leveraging Web3, Madhumita believes that the space offering several new opportunities to build stuff from the ground up is a positive indicator for people including women who may not have been able to participate in the Web2 wave for whatever reason.

The Republic of ‘Her’: Writing the HS Pioneers handbook

Web3 and the inclusion agenda

This also ties in with the larger commitment to the global agenda of diversity and inclusion, which despite growing commitment from companies still require greater engagement. Talking about GIANT protocol, Suruchi shared how she believes Web3, crypto, tokenisation in blockchain is the future. “The biggest challenge when it comes to any new technology is inclusion. How do you really make it accessible to anyone and then be owned by everyone? So when we were thinking about that at GIANT, we just thought of this idea where connectivity, one of the world's most widely used utilities, where we turned connectivity and the money that we all already spent on connectivity into a global digital asset, making it easy and intuitive for the 5.18 billion of us that already spent $2 trillion to access internet and seamlessly become a part of this economy,” shared Suruchi on the motto of building an inclusive internet.

Having been in the space for over a decade having conceptualised two startups (OroPocket and Unifarm), Tarusha highlighted the importance of Web3, and its beauty which she believes stems from the fact that it's decentralised and everything is open source.

When asked about building products looking at scale, Niveda talked about the foreseeable things that she looks for when building a product. “I think one of the major things that I realised when I first came into this space was how we are in a very early adoption phase. I'm very strongly thinking about the next generation of users who are going to need to start using these products and the level of understanding that they may have of the tech, which could be a lot lower than any early adopter stage where the underlying layers are a lot deeper. We are very customer-focussed,” shared Niveda.

Further, speaking about new business models and innovative mechanisms for monetisation, Madhumita highlighted how NFTs are a completely new monetisation model for art and streaming content. “You pay for every few seconds of content watched instead of for the entire concert content upfront,” she shared on how the future is going to be “tokenomics”.

Having raised money both by tokens and equity, Tarusha shared her views on how bootstrapping is different in Web3 with the differentiating factor being speed. “I believe bootstrapping in the Web3 space will be harder because you need a lot more service providers for tokenomics to work, from market makers to adding liquidity to exchanges, to the diverse kinds of things that you need to perform the actions to ensure your token is able to sustain a certain price or grow, and all of that requires liquidity. Ultimately, if you are creating a token, then you would have to look for investors, and then eventually you have to put it on an exchange. So, that is just a very organic way to grow and scale in the web three space,” explained Tarusha.

Shilpa has been one of the architects of Myraa Technologies, looking at research development, machine learning (ML), artificial intelligence (AI), blockchain, IoT (Internet of Things) and mixed reality. Talking about her journey, Shilpa shared how as a solutions company, Myraa Technologies has not perceived one single problem statement. “Customers from 11 industries came to us — from maritime manufacturing, to aircraft, or even fintech and many more — our customers came with the demand to improve their practices, so as to automate their processes inside their organisation. So, naturally, the demand for Web3 came into picture,” she shared. She seconded Tarusha’s opinion that it can’t be a one-man show. So, the key is to drive and nurture communities to contribute to Web3.

Going forward, Shilpa, Tarusha and Niveda agreed that educating customers and stakeholders would be a key commitment. Second is a “worldwide collaboration”. The third factor would be the incentivisation of tokenisation.

At the end, a better cultural overhaul is also what the leaders rooted for. Sharing her travails of hiring from the perspective of a female founder, Madhumita shared how often those who were promising on paper displayed a flippant attitude at the time of interview. And how the same candidates would shift gear and display more professionalism when a male tech advisor would walk into the room.